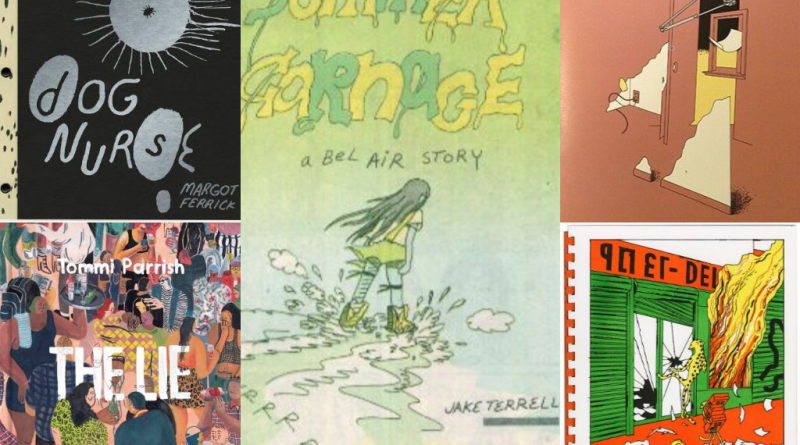 Welcome back, dear reader! Today is the last installment of The Comics That Challenged Me in 2018. I hope you found the list interesting – let’s get right into the last five books.

I’ve got a lot of artists published by Perfectly Acceptable on the list this year, and partially that’s because the press is taking risks, pushing its zines to the limit of what the format can tolerate. Anna Haifisch is one the most talented cartoonists working today, and she has a new 28-page comb-bound zine. This one, The Mouse Glass, follows a similar format to her 2017 comic Drifter – a storybook image captioned at the bottom of the page. In this comic, Haifisch delivers a one-hit K.O. parody of the current state of international politics. Haifisch has a simple, cartoony style, but in this specific comic she uses it to great effect, juxtaposing cute looking animals with their loathesome thoughts and actions.

The Lie and How We Told It – Tommi Parrish

I reviewed this book in the middle of January this year, and it’s a book that’s been on my mind since. Parrish’s painted comics are beautiful, but the formal inventiveness of The Lie And How We Told It was unparalleled this year. Using a metafictional book, “One Step Inside Doesn’t Mean You Understand,” as a lynch pin to hold the whole comic together was a fascinating choice, and one that paid clear dividends.

I added this to my list of books I liked in 2018 over at Your Chicken Enemy, but I think it bears revisiting here. In Dognurse, a child named Songy has a strange nose and a disease called mumble-mouth who receives care from a visiting nurse named Dognurse. With Dognurse, Ferrick approaches the topic of parental neglect and the facade of care, but it’s an opaque comic and rewards close reading. Ferrick’s art throughout the book is beautiful with decadent linework and a fullness of figure you won’t see in other comics. This comic was a hard read, both because of its opaqueness, and for the way it affected my emotional state. There’s a deep melancholy in Ferrick’s recent work that is transmitted extremely effectively to me as a critic and reader. Ferrick is a master of building emotion into the flow of each page, and Dognurse was another powerful example of that mastery.

I got this 2015 zine by Walker Tate from Domino Books, and got around to reading it this fall. What I found was a formal exercise where the movement and size of panels drives the storytelling and drawing. Tate subdivides his pages in so many ways that panels need to be numbered in order to help the reader move through the comic. The only reason Extract works is Tate’s precise line. This was an impressive, dizzying comic, the cleanest looking cacophony I’ve ever read.

The first text in Jake Terrell’s latest comic is the word “meanwhile,” an indication that this book isn’t going to operate like you expect. And that is an assumption that largely held true. Figures speak with speech bubbles that have no text, panels seem to have an order that is largely intuitive but not logical. This isn’t a book you read as much as a book you soak up. There’s a dream logic to Summer Carnage: a Belair Story that feels inescapable. The book is delicate, as Terrell’s cartooning often is, but Summer Carnage: a Belair Story takes the proclivities of his previous book Extended Play, and turns them up to 11.

The finalized list will go up on Friday. We’ll take that day as a break day and get back to regularly scheduled reviews next week. I hope you enjoyed this series, and as always I’m interested in what you think about the books I selected! Let’s talk, either in the comments or over at Twitter.