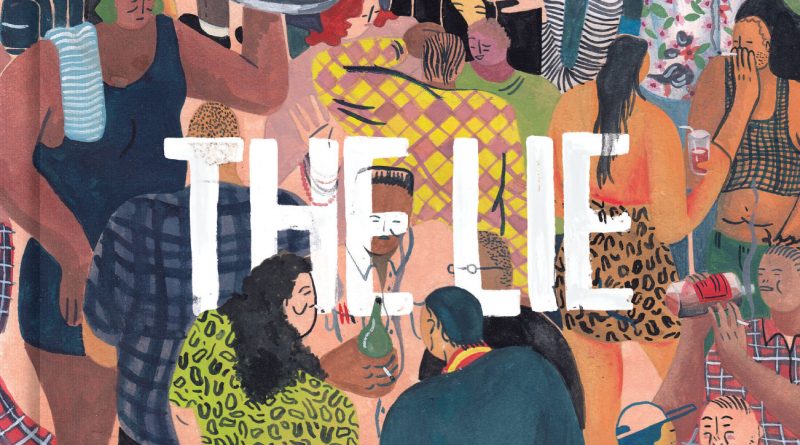 Tommi Parrish is one of my favorite rising cartoonists. Their work in NOW #1 was a highlight of the anthology, and their comic Perfect Discipline and Unbending Loyalty was one of my favorites of 2017. It seems like a lot of Tommi’s work is coming out all at the same time, but they’re back with The Lie and How We Told It from Fantagraphics. The book has been selling at shows now for a few months, but it hits bookstore distribution next week. I got an advance copy from the publisher.

The Lie and How We Told It is a story of interpersonal relationships, and hinges on the chance meeting of two old friends, Cleary and Tim. The two run into each other as Cleary gets off a shift at the local grocer, and spend the rest of the evening together, drinking, remembering old relationships, and rehashing the past.  In this 90-page painted graphic novel, we see the two people navigate an awkward and fraying relationship as well as circle around the conversation of their sexuality and desire. Over the course of the night, the two fall further and further apart, what remains of their friendship disintegrating as the two find themselves in remarkably different places; Cleary, confused and listless, and Tim, ready to be married. The two also have made different journeys in their understanding of their own selves, which causes tension throughout the book.

In the midst of this evening of drinking and conversation, Cleary finds a book in a bush, titled “One Step Inside Doesn’t Mean You Understand,” which details the sexual relationship of an erotic dancer with a newly divorced patron. Cleary reads this book over two sessions, and then leaves it for someone else to find, just as she found it. This metafiction adds a subtle note of sorrow and angst to the telling, and reverberates through the conversations that Cleary and Tim have throughout the night. Part of the connection between “One Step Inside Doesn’t Mean You Understand” and The Lie and How We Told It is the idea of superficial understanding, both of other people’s lives and your own life. We see this iterated on and evaluated from different angles through both books.

I love the way that Parrish illustrates their characters, with small heads and bulky bodies. The physicality of these people is so clearly obvious, their presence magnified. Thick hands swallow up wine bottles and fancy cocktail glasses. This changes panel to panel as the focus of the action changes, but Parrish wants you to be aware of the way these bodies exist in the world, how they rub and bump and slip off of each other. This stylistic choice is amplified by the way that each individual page is painted, which on first glance appears haphazard. Parrish has intentionally left some panels to exist in various stages of completion. These images act as implications of personhood rather than the fully fleshed out and detailed. The thematic message of superficial understanding is seemingly amplified through Parrish’s choice of illustrated technique.

The metafictional aspect of “One Step Inside Doesn’t Mean You Understand” is also shown in the illustration, where Parrish decides to use black and white linework rather than paint, like the rest of the book. These images are generally more consistent, more “on model,” which feels right for the way the rest of the book is illustrated. This world inside the world is a little easier, a little more self contained, but also emotionally resonant, and setting it apart through its illustration makes the formal experimentation fold into the comic naturally.

One thought on “Review: The Lie and How We Told It by Tommi Parrish”