Genghis Con was two Sundays ago, the weekend after black Friday. I spent a lot of money on books, had a great time, and over the course of the Sunday show and the Monday Brainstorm Lecture I met a lot of great people in person for the first time.

Thanks genghisconcleveland for a great show.

This is going to be more stream of consciousness than usual.
I met Cathy G. Johnson at the show for the first time in person. I pulled out my business card to ID myself (my twitter icon is prominently displayed on the front of the card). Taking off the internet face/mask is scary. I’m not an outgoing person by nature – shows always make me nervous and a little “butterflies in the stomach”-style distressed. Thankfully, Cathy is one of the nicest people I’ve met in comics. Talking to Cathy in person for the first time was like talking to an old friend.
After talking a while with Cathy, I chatted with Kevin Czap about running the show and how things were going. This was the first time I had been at the show and the first year in the new space at the Screw Factory, and it seemed to be going pretty well once it was all up and running. Good crowd, a food truck outside. From an attendee’s perspective, it seemed super smooth, almost effortless.
I wound my way round the building. Talked to folks from the Oberlin Comics Collective, bought a lot of zines. Had a nice discussion with Tym Godek about formal tricks and process. Met MJ Robinson and I wish I could have paid them way more for a copy of Rind than they were charging.
Patronized John Porcellino’s table and dropped some $$, mostly his own work this time. I last saw John at SPACE, and spent most of my money on distro stuff, which was good for me at that point in my reading.  We talked briefly about the end of his book tour and the travel. I had my copy of The Hospital Suite to get signed and other King Cat stuff to buy. I’m not going to dive into all of it right away, but I’m going to be happy to have those books in February.
Met Jim Rugg and talked to him about manga mostly, and his own comics. Took up a ton of his time, talking about Wandering Son, Cross Game, Tezuka; he talked about wanting to find more comics that were written for/about adolescents. I hope the suggestions helped. jimrugg – I should have also plugged Twin Spica, you should check that one out too.
Jim and Frank Santoro were basically at the same table, so I stopped and chatted with Frank briefly about the demise of PictureBox, the damn-shamed-ness of it all. We chatted about the insane internet price of the first issues of Copra. Finally bought a copy of Pompeii – I told him I write and he threw a copy of Comics Workbook Magazine at me.
Frank is an interesting person. Earlier this year I got all pissed off because he said he wouldn’t read reviews of comics by people who didn’t make them. Which was me being self-absorbed and myopic, but it was how I felt.
Now I don’t know what to think/feel about that. Does an art critic need to be proficient in an art in order to have a voice? How is an artist generally supposed to respond to criticism? I’m still struggling with those questions. I’ll probably struggle with them for a while.
I’ve been thinking about Genghis Con for a while now and my year as a comics reader. I saw Frank give the “hard sell” to a con-goer on Katie Skelly’s Operation Margarine. He asked if they were a comics maker, and they said “no, I’m just a reader.” He told them that was important.
I have ruminated on this idea for a while, the idea of being “just a reader.” I joked with Cathy and Kevin after the Brainstorm lecture I covered last week that I would write a manifesto about it. It’s getting a few sentences here because it is important to me that independent cartoonists have an audience outside of the cartoonist community.
I could never make comics. But I admire the people that do. What you do feels so essential, and I want to support that as much as possible.
I’m happy to play my part –whatever it is, or becomes. 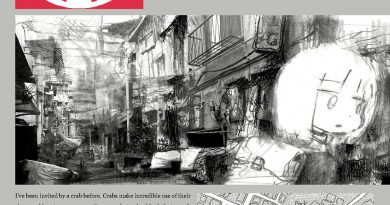 Review: An Invitation from a Crab by panpanya