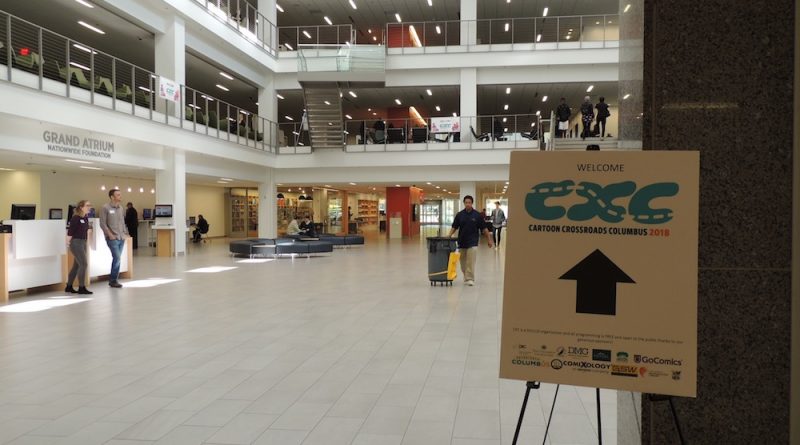 Cartoon Crossroads Columbus (CXC)  is a relatively close show; a day’s drive from where I live and you’re in the bustling center of Ohio, ready to hit the town. CXC isn’t exactly local, but it’s not a plane ride, if you can drive and hate yourself enough to spend hours of your life stuck on an interstate highway. I got in on Friday late and decided to stay in rather than participate in any festivities. CXC is a blended model festival, incorporating an academic conference on Thursday and Friday with a more traditional show floor on Saturday and Sunday. It runs concurrently with SÕL-CON, a sister show focused on the comix of brown and black creators that has its own identity and programming track.

I’ve been thinking about the world of small press comics and my role in it over the last few months. Comics can be a truly isolating profession; it requires you spend weeks and months at a drawing table in order to make art that people will read in minutes or hours. Writing criticism is a microcosm of that, although to the smallest of degrees.

It’s been a hard year. Comics have been a refuge, but I have, for reasons that are still too delicate, drifted towards and away from them over the course of the year. Still, I made plans to attend Cartoon Crossroads Columbus in the late summer, and thankfully made it work.

I came in to the show on Saturday morning with a plan to do most of my comics acquisition on Saturday afternoon. I wasn’t certain what my plans were on Sunday (minus the Olivia Jaimes panel at 3:30), but I knew that I would be staying out late and would likely want some recuperation time on Sunday morning. I picked up a lot of Silver Sprocket’s recent releases, picked up my Kickstarter rewards from Kilgore Books, and made sure to get around and pick up comics from up-and-coming creators, including the student anthology put out by CCAD. I did my annual “buy one of everything” stop at the Koyama Press booth; I have a high degree of faith in Annie’s taste. I was very pleased to see Annie Koyama and Ed Kanerva at the show. The two of them are very sweet people who have made my life better in measurable ways through the work of the press.

As I consider Cartoon Crossroads Columbus, I keep thinking back to the show floor. To be fair, I still don’t know how to feel about these flea market affairs. I appreciate the commercial aspect of comics, and understand that part of the appeal of small press comics is their reproducibility. But I become more convinced at each passing day that the small press comics community is uniquely fragile and susceptible to the impact of major corporate influences, like Amazon. The current distribution model of these comics is a series of flea markets, a sort of boom and bust economic model that increases income uncertainty and depresses artist wages. Most of these shows extract some amount of money from the process, and that’s been a growing cause for concern amongst some cartoonists and those adjacent to the scene. CXC and the festivals like it are operating in a way that currently pays little attention to those concerns; I’m not sure that will be a tenable position much longer, especially if the work being done around the Festival Workers Association continues to grow stronger.

Saturday I went to two panels, and only that many because of my poor time management. I walked in late to Keiler Roberts’ spotlight panel, and got to see her do a reading from her new book Chlorine Gardens. I took some time after the panel to stop at Keiler’s table, and we chatted about life. Keiler is a lovely person, and it is always a joy to spend some time with her. She was at CXC solo, which we agreed is a lot easier when you have a family to consider. After that, it was show floor table after table. I spent time chatting with Stephen Floyd of One Percent Press, caught up with Kevin Czap of Czap Books, and had a chat with Kevin Budnik and Whit Taylor, all of whom were kind and giving of their time. I caught up with Ryan Cecil Smith. Things continued on like this until I stumbled out of the Metropolitan library in an addled haze to grab a bite to eat.

I made it back just in time to miss Keren Katz receiving the CXC Emerging Talent Prize. After that, I made my way to one of the final panels of the day, a Noah Van Sciver feature, with him in conversation with Dan Stafford of Kilgore Books and Zak Sally. Both Dan and Zak had a relatively open conversation and gave plenty of time at the end for discussion. I got to ask questions about Noah’s participation in the French anthology Bento, among other things. I came away from the panel with a better understanding of Van Sciver’s artistic drive and his process.

Saturday night, I attended a showing of Büer’s Kiss, a blended comics reading and performance with full Foley effects and musical score. The performance was held at OSU’s Urban Arts Space, and was fabulous.  I’m planning to write about my experience in greater detail soon, so I’ll leave it here for now, but by the end of the show I was exuberant about comics and  I was also ready to go get some sleep.

Sunday was a late morning. I had a quick breakfast and explored the city before heading back to the show in the early afternoon. I did some panels, including the Ngozi Ukazu spotlight panel. Ukazu was charming, and the boardroom in which her panel was situated was packed full. She drew as she discussed her breakout comic Check, Please!, about queer romance and college hockey. I gathered that Columbus is a hockey town. Who knew?

The real goal for Sunday, though, was the panel with the mysterious Olivia Jaimes, the new artist on the Nancy syndicated comics strip. I’ve really loved a lot of the new Nancy comics, so I was curious about her process and to hear her talk. The panel was under tight wraps – the CXC website stated ahead of time that phones would be confiscated and no recording devices would be allowed.

This was all well and good; I was perfectly willing to give up my cell phone in order to see Jaimes speak about her comics. That wasn’t to be, however. The panel was supposed to be going on in the same boardroom as the Ngozi Ukazu panel, so after a quick water and restroom break, I headed back to that room. I waited until just a few minutes before 3:30 PM, only to be told by another attendee that the panel had been moved to a different room and moved up to 3 PM. When the 10-12 people waiting moved downstairs to the appropriate room, two were allowed into the panel, and the rest of us were turned away.

Needless to say, that was a pretty frustrating experience. I complained on Twitter, and had a private conversation with the festival organizer, Tom Spurgeon. While I’m not certain anything will change in the future if the same situation comes up, I appreciate that the boardroom that the panel was planned to be held in was pretty wide open, and easily photographed by non-attendees. And while I’m not certain that the communication from the show organizers will improve in the future, I did feel listened to. Tom acknowledged the situation and its relative shittiness. That says something, and I appreciate the gesture.

I think it says a lot (in a bad way) that the security was so tight surrounding Ms. Jaimes. One other guy who waited in the same room with me (and who was one of the two people who got in from our group) wrote a lengthy screed on his personal blog about his experience (since deleted, although Kim O’Connor has a copy recorded for posterity on Twitter). This guy pulled me into a 15-minute scolding of Tom Spurgeon on Twitter, which was awkward. Tom, as the festival organizer, is the one who should rightly be responsible for this kind of thing; why I got dragged into this public scolding and subsequent apology is a function of Twitter threading and the inability of certain people to read a room.

After this experience, I decided to hit the road. The Jaimes spotlight was the last panel of the show, and it was a long drive back home. Having completed my shopping the day before, I decided to make an early break instead of doing another circuit around the floor. This abrupt exit left me a little disoriented – I didn’t get to say goodbye to many folks, which, in retrospect, was not the best choice. Part of the reason you do these things is for the people. I should have been a little more social.

Minus the final moments of the show, I enjoyed CXC this year. I expect I’ll go back in the future. I think the festival has room to improve. One thing mentioned to me was press access. Hopefully they’ll have press credentials ironed out in the future; this privileges me more than the regular attendee, but will make interviews and other access a bit easier.

I left CXC with less overflowing goodwill and enthusiasm as I have in previous years, and for previous shows. I think that’s more of an indictment of my year than of the show; still, as we move into a new season, I am excited for change. And I have a huge new pile of comics to read. The world is tough, but sometimes, it is also kind – comics has been a better reminder of this than most things. So thank you, CXC, for that – for making space for me to be around people who remind me that the world can be kind.

Some Quick Thoughts on TCAF 2016