One of the subscriptions I got last year that I really enjoyed was the Minicomic of the Month Club. Like it says on the tin, you get a mini comic mailed to you every month. It’s a nice surprise letter in the mail when the new mini comes, and it’s an easy way to see and support the work of cartoonists with a pretty low personal financial risk. for about $35 USD a year, you get 12 months of mini comics from Australian and New Zealand-base cartoonists; cartoonists like Bailey Sharp and Campbell Whyte have participated in the series.

Of all the minis I received from the 2014 subscription, the two-part Plain was the most engaging. Written and illustrated by Bailey Sharp, a recent CCS graduate, it focuses on the relationship between two young women, Penny, who is severely disfigured by an automobile accident, and Violet, who feels responsible for the accident.

Prior to the accident Violet is rude and not very concerned with Penny’s feelings. Violet jabs at Penny about a guy that Penny is interested in, and then she butts into their conversation at a party and starts to hit on the guy.

After the accident, Violet becomes overbearing and obsessed with Penny. The relationship spirals out of control as Violet absorbs the responsibility for the accident into her sense of self. Penny, for a time, allows Violet to fuss over her, but in reality, the accident seems more like a trading of places. Penny suddenly becomes free to be the angry, no-nonsense person she always feels she was, and Violet is stuck in the past.

Along with this tortured relationship, Bailey Sharp works with themes of appearance and self-image, and destructive behavior. Penny, after coming out of self-imposed exile, begins to act out, culminating in appearing on stage for a local band. The audience reaction is what you would expect. This self-flagellation becomes a theme in Penny’s life. A dream sequence confronts Penny with her old appearance and her transformation; her blunted emotional reaction with Violet seems legitimate, but favoriting nasty comments on YouTube of her performance with the band shows her true hand.

Plain is two 18 page black and white photocopied zines, illustrated in black and white with screentone for texture. The art is simple and cartoony – it allows Sharp to entertain the idea of violent physical disfiguration without the story being overwhelmed by it.

Plain, at its heart, is a study in how relationships change and how people change. Sharp has constructed a small but intimate portrayal of one such relationship. 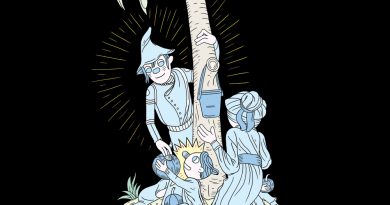 One thought on “Review: Plain by Bailey Sharp”