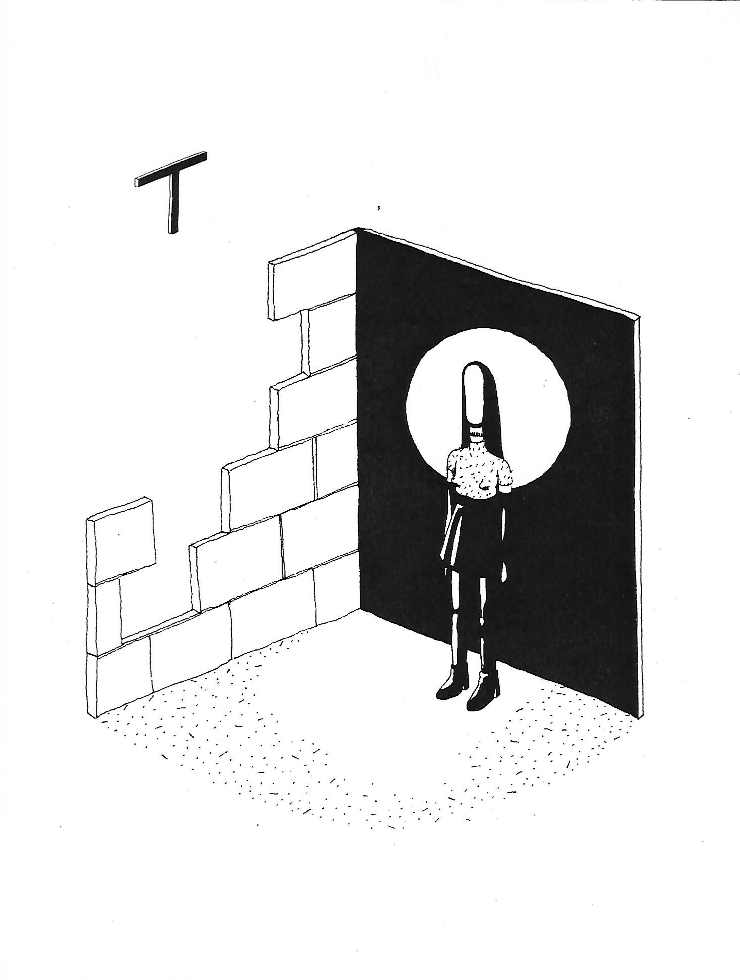 Up and coming cartoonist Bailey Sharp sent over a new comic to review in November last year and I just recently got around to reading it. This should tell you how far behind I am on my reading (it’s bad folks); the book was one of the comics included in Short Box #2, the international comics program from Zainab Akhtar’s Comics and Cola, and is now available from Sharp. Sharp is a Sydney-based cartoonist who came to my attention through the Mini Comic of the Month Club, and I previously reviewed Sharp’s minicomics Plain Pt 1 & 2. In many ways, T represents an expansion of Sharp’s artistic sensibilities.

In T, we see a girl get a vague text message from her boyfriend Spencer. The main character, nicknamed T, doesn’t answer; she’s wracked with anxiety about the message. In trying to escape from the text, she wanders around the school, skipping classes, hiding in the theater and under outbuilding trailers. Along the way, she goes through the mental gymnastics of interpreting the message – is it good, is it bad? Is Spencer proposing to her, or is he breaking up with her?

Sharp’s cartooning seems even sharper than other recent work. T as a character is tall, thin, with elongated cheeks; it’s like she’s been stretched like taffy, and with a long blob of dark hair. This character design feels like a play on that old colloquialism “why the long face,” but T certainly looks upset and anxious for most of the comic, and the design makes that work. I’m impressed with the way Sharp uses the dark blob of T’s hair to cut up panels and direct the reader’s eye. Generally, Sharp’s line is thin and delicate; if memory serves, Sharp used screentone in Plain, but that material has been abandoned for a more sparse, less textured style that relies heavily on spot blacks. The book is arranged in the traditional 3×3 grid, although Sharp improvises on that grid, using a header bar to give us T’s inner monologue and switches the reading style in a scene where T descends a scaffolding, which felt like a smart modification. These formal effects aren’t groundbreaking, but they highlight Sharp’s thoughtfulness and growing cartooning skill.

Using the modern American high school as its backdrop, T examines a misogynistic world. This is a world where a young woman’s emotional well being is an easy sacrifice to keep a (probably) older man happy. There’s a jittery fear to the whole comic; T asks herself, “what did I do? aren’t I… perfect?” T’s friend, who is going with her and Spencer on spring break, freaks out when she finds out T is avoiding Spencer. This other girl is just as willing to abuse this other woman to get what she wants, knowing that Spencer’s happiness is the only way she can achieve her goals. T feels the need to give up everything to Spencer, both emotionally and sexually. The misogyny and male-dominance expressed in the relationship between T, her friend, and Spencer extends to other scenes throughout the book. A specific scene where a boy confesses the only reason he liked a girl’s acting in a play was because he could see up her skirt is especially telling. The entire comic is queasy like this, standing on the edge of nausea.

Importantly, we don’t see Spencer at all throughout the comic. But his influence looms large, poisonous. The weight of him is unbearable.