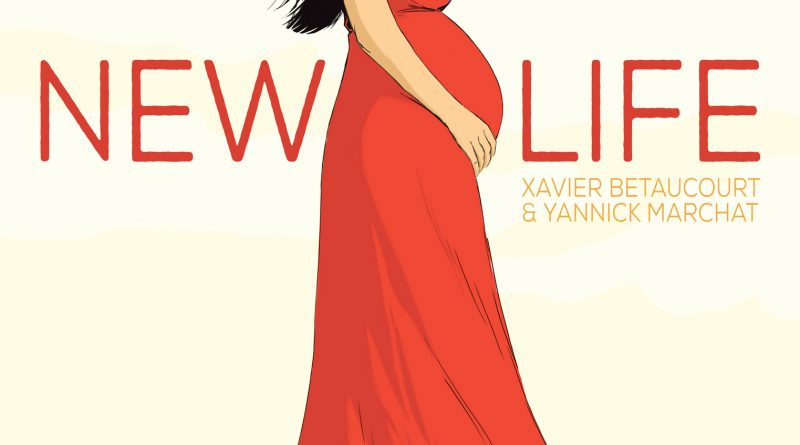 I’m doing a 180° turn this week, writing about a graphic memoir I loved and then immediately reviewing a book I found unreadable. Part of Humanoids’ Life Drawn line, New Life is a 128-page softcover published in late January 2019. New Life details Xavier Betaucourt’s life after getting a divorce in the middle of a mid-life crisis, and then starting a new relationship. He is told by his new girlfriend Leah that it would be almost impossible for her to conceive, so they don’t worry about having protected sex. But, if I can be cheesy for a second, “life finds a way,” and in the early pages of New Life Betaucourt finds out that he is going to be a father for a second time. How can he be a father so late in life? Wasn’t he looking for freedom, not more constraints? How will his adult son deal with the relationship and the new baby?

The writing of New Life, if I am generous, is neurotic. His girlfriend Leah is likely 10-20 years younger than him, and when they find out she is pregnant, an entire closetful of neurosis is opened in Betaucourt’s mind and dumped out onto the page. I am sure that Betaucourt the person and Betaucourt the character are different, but he doesn’t really paint himself in the most favorable light. He’s not a compelling main character, or someone you can empathize with. In truth, he comes off as a huge jerk for most of the book. Less concerned with the health of his baby and his partner and more concerned with his fear of the uncertain, Betaucourt isn’t the picture of fatherly joy or compassion. Leah, his partner, is sweet and gentle with him while he puts on a show for the reader. In some ways she is going through pregnancy and also doing a lot of caregiving for him. It seems as though the intent is that Betaucourt idealizing her behavior in a way that creates a stark contrast to his own, but the result isn’t effective; it just makes you feel bad for Leah and irritated with Betaucourt.

It would be fine if Betaucourt is supposed to be something a heel throughout the book, but the ending of the story is supposed to be a happy resolution to all of the major issues presented in New Life. That’s a U-turn that doesn’t work, and that’s the crux of most of the issues with the book. New Life is a real drag no matter how you slice it, and it was hard to pull myself through to the end. At times Betaucourt is boastful and at times just kind of wretched, and while there are some interesting moments in the interplay between him and his adult son, New Life is not a very pleasant read. There is at least one sex scene included specifically so that the reader knows that yes, Betaucourt did have sex with his pregnant girlfriend. Conversely, at one point Betaucourt analogizes the paternity claim process (something which must be a legal requirement in France as a part of granting parental rights) to going through hell and selling his soul. Classy.

Marchat’s illustration is fine in certain places, but honestly don’t help the comic all that much. The lines are competent but not exciting, the compositions are workmanlike but not inspired. One of the main thematic illustrative choices of the book is in the eyes of the two main characters; Betaucourt is drawn like he’s lost both of his eyeballs and they’ve been replaced with glass beads, while Leah is often drawn like hers are about to pop out of their sockets. This echoes some of the disenchantment of Betaucourt and the excitement of Leah, but visually it is a distraction. The way Leah is illustrated throughout the book is different than the rest of the characters, and the differences between her and the other female characters in the book is especially pronounced. Marchat draws her in a sort of dewy, nymph-like way, a way that is hyper-informed by the male gaze. From the perspective of seeing the world through Betaucourt’s eyes, it makes sense; he’s infatuated with Leah, and so everything about her is more pronounced, including her sex appeal. Even though I can recognize that as a critic, it’s still disconcerting. Besides those quirks, New Life is visually dull. The colors do the comic no favors, almost all in pastel shades and without any vibrancy (besides some brighter reds when Betaucourt imagines himself walking/crawling through Leah’s uterus… yeah, really).

There are plenty of late-in-life dads who have concerns like these when they have a child, and that perspective isn’t one I’ve seen very frequently. So there’s some value in Betaucourt telling a personal story of fear and anxiety about the birth of his child that is wrapped around his mortality. And having a newborn is tough no matter what age you are. But the specific narrative and illustrative choices that he and Marchat make throughout New Life deaden the impact of that story and make it difficult to connect with. New Life was a soggy blanket of a book. I found it wholly unappealing.

Review: This One Summer, by Jillian and Mariko Tamaki

Review: Nothing Whatsoever All Out in the Open by Akino Kondoh

One thought on “Review: New Life, by Xavier Betaucourt and Yannick Marchat”