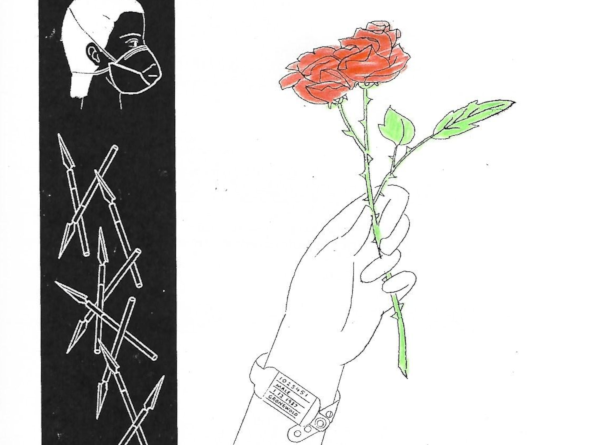 It’s been hard to approach HTMLflowers’ latest work, mostly because of how ruthless and unsparing it is. I read Incision a few months ago and made this comment about a month ago. Grant Gronewold (HTMLflowers is his nom de plume) challenged me to review it. It took awhile, but here we are.

Incision isn’t really a collection of comics, per se, but a collection of personal stories, told in a diary format. The way Gronewold interacts with healthcare in Australia is fascinating in a morbid way. Gronewold is growing older as a person with cystic fibrosis, a genetic disease that plugs up the body with thick mucus, making it hard to breathe, and eventually making it hard to digest food. At its worst, Gronewold’s body is slowly, perpetually drowning him, starving him.

Much of Incision is Gronewold coming to blows with the care he receives and his personal struggles as an artist and as a human being. We see Grant as an angry person, and we see the reasons he has to be angry in order to survive. We see his struggles to keep a bed at the hospital he receives care at, we read stories of manipulative nursing and provider staff, we learn about lung function percentages and expensive genetic medicines; all of these people and things are supposed to help him heal and survive, but almost all of them fail to comprehend or even acknowledge Gronewold’s life with chronic illness, let alone his desires or dreams. To be clear, Gronewold doesn’t care if the reader finds him likable, and Incision isn’t about finding sympathy. It’s about being disabled, about being complicated.

Interspersed between diary entries are illustrations on the same hospital ephemera we’re used to seeing in his series No Visitors (I’ve reviewed issue #1 and issue #2 here). Gronewold’s sketches are often full of symbolism, and we see plenty of that in Incision, but the collection also contains life drawing and illustrations that seem to be based on instagram selfies of other sick people. This change in illustration makes sense in the broader context of the collection, but it also points towards changes in the way Gronewold approaches art.

From a retrospective sense, Incision is Gronewold becoming more and more real as he gets older. His early work in Virtual Candles was steeped in a sort of whimsical fantasy. That work was an escape from his lived experience. But with his 2017 album Chrome Halo and with this book, I think a more vivid and honest picture of Gronewold’s internal world comes into focus. Gronewold’s series No Visitors often pokes at caregivers who refuse to give compassionate care, and a medical industry that others the ill and treats them like serial numbers. Incision shows you that experience in a personal, harrowing way. Incision pulls back the curtain and shows you what the comics (sometimes sad, sometimes humorous) in No Visitors are based on. It’s brutal.

HTMLflowers’ artistic work is a clarion call in a muddled world. Incision shows the internal world behind that work. These diaries are horrifying and heart-breaking. But more importantly they are necessary. They are a bright voice from a place we would rather stay dark.