Welcome back! This is part 4 of this 6 part list of comics that challenged me as a critic or as a reader in 2016. Admittedly, this part has 5 entries, but really 9 separate comics. Let’s get right to it.

This is a continuation of Gronewold’s No Visitors series, the first of which I reviewed in November 2015 along with his collection Virtual Candle. In the second issue, No Visitors amplifies Gronewold’s previous concerns about control, pain, disability, and a poorly functioning medical system that sees patients as numbers, not people. No Visitors #2 also begins to discuss the ways in which capitalist systems take advantage of the disabled for financial benefit. Gronewold’s comics are simultaneously vulnerable and fierce, delicate and jagged. No Visitors is a series that reaches an emotional and aesthetic tenor that few cartoonists can touch, and it’s absolutely not to be missed.

I’ve reviewed a few of the books from the Frontier line over the past 3 years, but 2016’s Frontier lineup was the strongest yet. I reviewed Eleanor Davis’ BDSM earlier this year, but each of the comics in the 2016 season had a justifiable place on this list. (I could have put them in as separate entries, but I’m greedy for list space)  Kelly Kwang’s Space Youth Cadet comics confront traditional form, using loading screens and digital artifacts to tell a story in a world she has been working on for many years; all beautiful pencil, with plenty of smoke and mirrors. Richie Pope’s discussion of black masculinity and fatherhood was complex and engaging, using vivid colors and expansive negative spaces. Each image was a storybook snapshot of a more complex human. And last, Rebecca Sugar’s meditation on nostalgia and the trickery of cartooning, of love, and revision.

Another 2015 release, Ding Dong Circus is a collection of Maki’s comics from Garo magazine from the mid 1960s-1970s. Sasaki Maki is better known for his illustration and fine art, but in this collection of manga from Breakdown we see Maki’s work as an avant garde cartoonist using collage and a wild array of influences to make some very stunning comics. These felt “harder” to read, first because non-narrative avante garde comics are always a little more challenging, but I think also this style relies somewhat on an understanding of the comics contemporary situation. To get the full experience, that meant reading Holmberg’s writing on Sasaki Maki, and other materials I could find, to get a good grasp on the collection. All of the extra work paid dividends.

Cosse is an undeniable talent and Palace No. 0 is a boundary-pushing short story anthology devoted to Cosse’s work from Breakdown. There’s a strength to this collection that exists both in Cosse’s experimentation with form, as well as his tightly controlled, well plotted stories. It’s very rare to see both that formal inventiveness and an eye for strong storytelling all in one place. I’m excited to see more from Cosse.

Sirio is the first comic I’ve ever attempted to read in a language that wasn’t my own. Google Translate phone capture is getting better and better, so with the help of a smartphone and some awkward positioning, I was able to get an idea of the text. It helps that the texture of Sirio was so brilliant, and while I’m not completely finished with the book, I love the way it pops visually, and the textures Martin Lopez Lam integrates into the work.

We’ll finish up the list this week. Keep checking back at Sequential State for further updates. See you Wednesday!

Sequential State is run ad-free. No intrusive pop-ups or in-line advertisement. No sketchy Amazon links. If your reading experience today was worth a dollar to you, please consider donating to the Sequential State Patreon. Thanks! 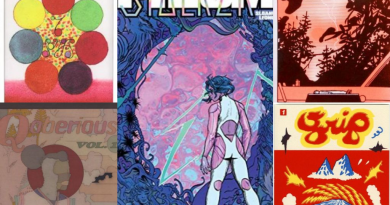