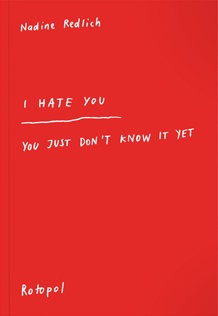 Nadine Redlich has a playful style that I’ve seen popping up everywhere over the last 5-6 months. I loved her recent Google Doodle celebrating the birthday of Erich Ohser (aka E.O. Plauen), a famous German cartoonist (I reviewed a collection of his Father & Son comics here). Her illustrations in the New York Times and in various papers are bright, funny, and the perfect kind of cartoony. In May this year, Redlich published a small paperback book with German publisher Rotopol Press, and they sent a copy over to review. I Hate You, You Just Don’t Know It Yet is a 64-page paperback, a compact 4” x 5.5” with red cover, red ink, and a ferociousness that overgrows its small stature.

At various points, Nadine Redlich plays with various motifs that are worth mentioning. The entire book is red, the color of romantic love. A smart design choice, but worth mentioning because of how vivid it makes Redlich’s relatively simple cartooning look. Redlich uses the simile of a vase to describe the relationship in question – “Our love is like a beautiful vase.” Each time the vase motif is used, Redlich subverts it; the first vase can’t accept any flowers, the second looks like it has been used as a toilet, the third has a mural of war and death, and so on. One is an urn, another is a toilet bowl. Nadine Redlich uses contradictions between what is written and what is illustrated to generate much of the humor in the collection.

There’s also some natural tension in I Hate You, You Just Don’t Know It Yet. we see Nadine Redlich illustrate herself as a small stone being smothered by a much bigger stone, or herself as a marble down a deep hole that is her romantic partner. Redlich also uses the concepts of wall building to discuss the distance and boundaries that romantic partners set with each other. We make ourselves vulnerable in romantic relationships, and sometimes that vulnerability is preyed upon or mistreated. Redlich emphasizes that brings that to the forefront throughout the book.

Redlich isn’t above being petty, either, which makes the book even funnier. “You have the most beautiful shape I have ever seen” she writes, above the image of a bag of trash. A lot of these images feel natural and off the cuff, like Redlich drew page after page in a sort of madcap frenzy, then later had them collected and bound. It makes sense that there are these cyclical themes throughout because there’s a bit of rumination in I Hate You, You Just Don’t Know It Yet, and it gives the book some heft.

Nadine Redlich’s cartooning is a delight for its simplicity and effectiveness. Her characters are chunky blobs with elongated noses, wobbly muppets with plump bodies and round manic eyes. But these figures allow Redlich to be a little harsher and a little meaner while still remaining playful.

2 thoughts on “Review: I Hate You, You Just Don’t Know It Yet by Nadine Redlich”