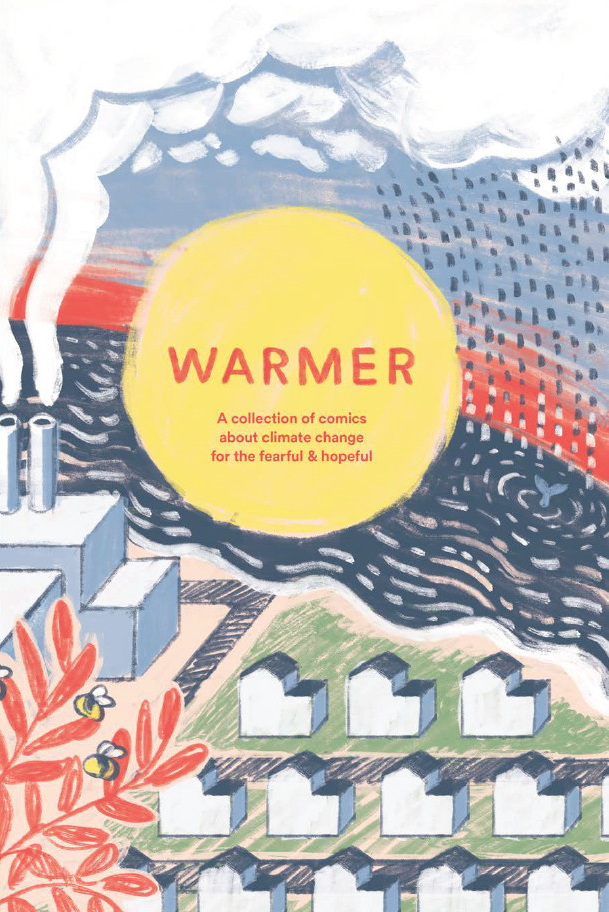 When Sequential State was a younger project, I tried a lot of different features and formats to talk about comics that I thought were interesting. As the project grew, I moved deeper and deeper into criticism. It’s something I’m comfortable with. I have been reviewing comics for nearly 10 years now. But I left a lot of things on the table. I’d like to start taking those things back.

This week I’m featuring a few comics that are seeking funding through Kickstarter that caught my attention.

Climate change is one of the defining problems of our time. There’s an imperceptibility to the issue, even as problems like colony collapse disorder and the rapid destruction of wildlife habitat constantly show up in your Twitter of Facebook newsfeed. The scope of the problem is so big that it borders on being unfathomable. And at least in the USA, there’s a controversy to the very concept of climate change. A not so small part of the conservative movement buries its head in the sand at the mention of the warming planet. It’s the fuck you, I’ve got mines fighting tooth and nail for fossil fuels against the better futures of their children and children’s children.

Madeleine Witt and Andrew White have put together an anthology of comics poetry that addresses climate change in ways that are both apocalyptic and hopeful. That anthology, Warmer: A collection of comics about climate change for the fearful & hopeful, is a planned 112 pages and features the work of 19 cartoonists. Both Witt and White were kind enough to give me some of their time to talk about the anthology and answer some of my questions.

You can find the book on Kickstarter here.

Madeleine Witt: After the election, I was doing a lot of lying on the floor, and crying in public spaces, and crying in cars, and crying on my friends, and not responding to texts. I was spending a lot of time being distraught about all kinds of things, and in particular, what felt—for me—like a mandate on whether we should destroy the world or not; a definitive statement that what we favored, as Americans, was industry and capitalism and short-term whatever over the fate of the earth and people.

Not that we haven’t been in trouble for a long time now. But the election felt like something of a definitive choice, and a move we couldn’t take back.

I wanted art that spoke to what I was feeling—not propaganda, aimed at an unconvinced audience, but something that would make me feel less alone in all this, allow me to move forward through the grief and towards action.

Around the same time I was thinking and talking with cartoonist Alyssa Berg about the potential of comics to be poems that take part in emotional and spiritual healing… Alyssa has made a couple of “spell” minicomics that start to move towards that, and I’ve been thinking about that in my work as well.

And the prospect of trying to speak to all that with an anthology would mean that I’d get out of my own head about this. I think climate change is such a communal grief; one that we’re all complicit in, and all hurt by, and there’s something powerful in addressing climate grief in community.

I wanted to work with Andrew because he’s one of my favorite cartoonists! I found and liked his work when I was just getting started making experimental comics, myself… And he’s someone I trust completely—in terms of his taste, and editing sensibility, and simply as a person. Also, we’d been talking and I knew he was already working on comics that were like the ones I wanted to make for the book—poetry comics that spoke to climate change.

Andrew White: The first climate-related project that I remember sharing with Madeleine was a series of drawings based on Curiosity Rover photos, begun last Fall. Somewhat stalled for now but maybe I’ll get back to them.

Climate change has been the thing that scares and concerns me most for a long time, though before those drawings I hadn’t found a compelling way to address the topic in my work. Maybe the turning point for needing to make art about it was coming to terms with the real possibility that it’s too late to avoid doing significant, long-term damage to our planet. Focusing on adapting rather than preventing. The 2016 US election is obviously part of that shift but certainly not all of it – many people think we reached the point of no return some time ago.

At the same time as editing Warmer I’ve also completed another long project that touches on climate change. So the anthology definitely helped congeal my own ideas about how to get at this issue.

Alex Hoffman: How involved were you both as editors?

Madeleine Witt: It varied by the piece! Some folks made work that felt resolved from the first draft, and that was great. Other folks, we worked very closely to refine pitches, getting at the heart of what they were trying to say, and going through multiple rounds.

Andrew White: We offer some degree of editing on every piece, ranging from thematic guidance to panel-to-panel transitions. We also worked to be sure we covered a range of emotions in the contributions, from anger to joy to fear and many more.

We made our own pieces last, in part as another tool for covering a wider emotional range. Trying to fill in missing pieces. I think Madeleine came to that idea independently but for me it was directly inspired by Sammy Harkham who did the same thing for at least one volume of Kramers.

It’s really hard to make a great anthology even with an amazing set of contributors. Hard to build a container and a set of ingredients that come together exactly right. I don’t know if we reached that goal but we did our best. I really appreciate how willing many contributors were to go through multiple rounds of edits.

Alex Hoffman: Cartooning is a medium you both work in, so it makes sense for you to use it to engage with climate change; do you think the medium has any advantages when it comes to addressing big issues like climate change?

Andrew White: I think comics has no special ability to discuss climate change or any other issue…  All art has a role to play in helping us understand and make it through our confusing world. Comics just happens the medium and the world we know best.

Madeleine Witt:  I disagree with Andrew, I think, haha—I think comics are enormously compelling, in a way that feels unique. Magical, even… it is very easy to not read a poem. Poems can be off-putting for people who don’t feel like poetry is for them, which is maybe most people. But comics—it requires active effort not to read a comic when one is in front of you.

I think that spellbinding quality is why comics are so effective as propaganda or pedagogical tools. But I guess my question in this project—and in my work in general—is if there’s a way to make work about things I care deeply about, and not merely make propaganda. Can I try to speak to people spiritually, as a Christian person, and not be Jack Chick? Can I try to talk about climate change, and not merely inform?

That compelling quality, when used with nuance and artfulness—there is enormous potential there.

Alex Hoffman: Are you doing anything with the production of the book that would make it greener, e.g. recycled paper, carbon offsets?

Andrew White: We plan to make a small personal donation to offset the carbon cost of printing the book. That won’t come out of the Kickstarter revenue.

Madeleine Witt: We’re also working with a printer who I know well, who prioritizes environmental concerns—Puritan Capital, in New Hampshire. And obviously, that’s important to us. Other than that, the goal of this project is just to make a book.

It’s a paradox that we’re making a book—like any kind of production, it’ll result in emissions. The production of paper, the act of printing; shipping the books to me, where I live in Massachusetts, shipping the books from me to our backers, who live around the world… Even, for people who purchased the digital product—there’s electricity in the charging of our computers and tablets and phones. The very act of breathing required to read involves an intake of oxygen and an output of carbon dioxide.

… But like breathing, I think publishing a book in itself is not the problem. I believe deeply that it is good for people to be alive, and breathe; it is good to write and print books, and ideally those actions can exist in the world in a way that is neutral or healing to the world, rather than destructive.

There’s a tension to all of this that won’t ever be resolved, I think. Moving through the world and holding, within yourself, the capacity to destroy, and to create; and often doing both at once. Doing both all the time, no matter how hard you try… I don’t have a good way to resolve that.

Thanks again to Madeleine and Andrew for taking the time to talk with me about the book.  If you like what you see here, consider supporting the Warmer anthology on Kickstarter. And support Sequential State on Patreon!