Today is part 2 of a 4 part list of comics that challenged me in 2017. Here’s a link to the first part of the list. Hope you enjoyed the first installment! 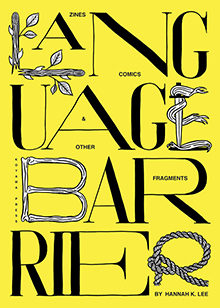 Hannah K. Lee’s first collection of zines and comics from Koyama Press was a great joy this year, both for the material it collects and the way that it presents that material. There’s a sort of found object effect to this collection; you can see the original zines as they were published, in the same dimensions and colors. That effect made me think about the way we collect and sterilize zine culture when we move from zines to the collected edition, and how much we lose when we do that. Language Barrier also contains some starkly realized comics, a few of which were favorites on the year. This combination of collected material and new was the keystone to my comics experience in 2017.

Angel of a Rope by Adam Buttrick; self-published 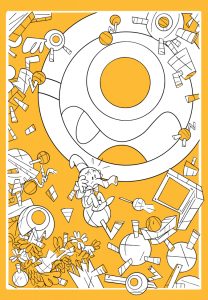 I wrote a review about Angel of a Rope, so for full thoughts, check that out. One of Buttrick’s more approachable works, this goldenrod zine approached the artist’s relationship with capitalism and power, the darkness of the current economic realities for cartoonists, and the brokenness of the current arts landscape. I think the more I’ve interacted with the artist, the more the meaning of this work crystallizes in my mind, and to be honest that’s not what I expected. But I think those conversations have proven valuable, and Angel of a Rope is a comic I continue to come back to months after I’ve reviewed it. Buttrick also draws a good elephant. 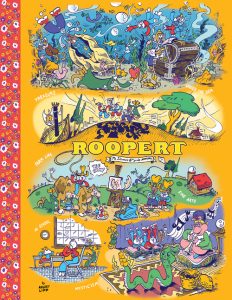 Roopert was my first interaction with August Lipp’s work, and it was a whirlwind. Roopert  was a hard comic to pin down – Lipp’s character designs look like something straight out of Merry Melodies, but the tone of the work was surreal, bordering on the unhinged. There are some unique features to the work that connect the dots nicely for me – Roopert  is set in a schoolhouse, and the comic is drawn (or at least, printed to look as though it was drawn) on ruled notebook paper. Lipp’s cartooning explores the line between human and animal and the disconnect between the powerful and those they would attempt to control, but you could also argue that Lipp’s Roopert is a cartooning id run wild. I think either explanation works, depending on your point of view.

Book of Void by Victor Hachmang; published by Landfill Editions 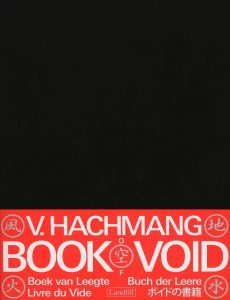 Here’s another book I reviewed – Hachmang’s minicomic from Landfill Editions confronts the blurry line between “high” and “low” art, and asks the question, “can an act of violence or destruction be beautiful?” I compared Book of Void, or at least, the kind of inquiry it is doing, to the work of Ai Wei Wei. There’s also an inherent grasping, a strength of style to this book. Where it lands for each individual is likely going to be closely tied to how you react to the illustratorly images therein. 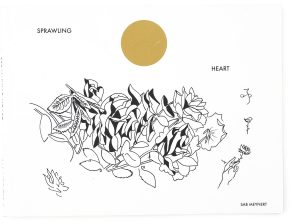 Last week, I said of Sab Meynert’s Sprawling Heart  on Twitter – “No one has written a review of Sab Meynert’s Sprawling Heart because comics critics are all too scared and too ignorant.” And to a large degree I think that’s true, but I also think that it’s not a good enough excuse. Hiding is no longer an option, being afraid is no longer an option. This life is too short, and the world is too unkind, people are too unkind. But Meynert’s work exists on a kind of higher plane, and anyone who reads it is exposed by its brilliant light. Meynert’s comics were a source of strength for me in 2017, and I think this book is one of the best 2dcloud has published. Every time I go back to it, I see new details, find new things to be amazed by, and I’m reminded how Meynert’s work touches on the metaphysical, and how beautiful it is. I’m reminded of how Sprawling Heart channels the natural world and our response to it, our awe of it. Sprawling Heart is manifest in itself, and once read, manifests in us. There’s power in that.

The third part of the list goes up on Friday – see you around!

Review: Angel of a Rope by Adam Buttrick