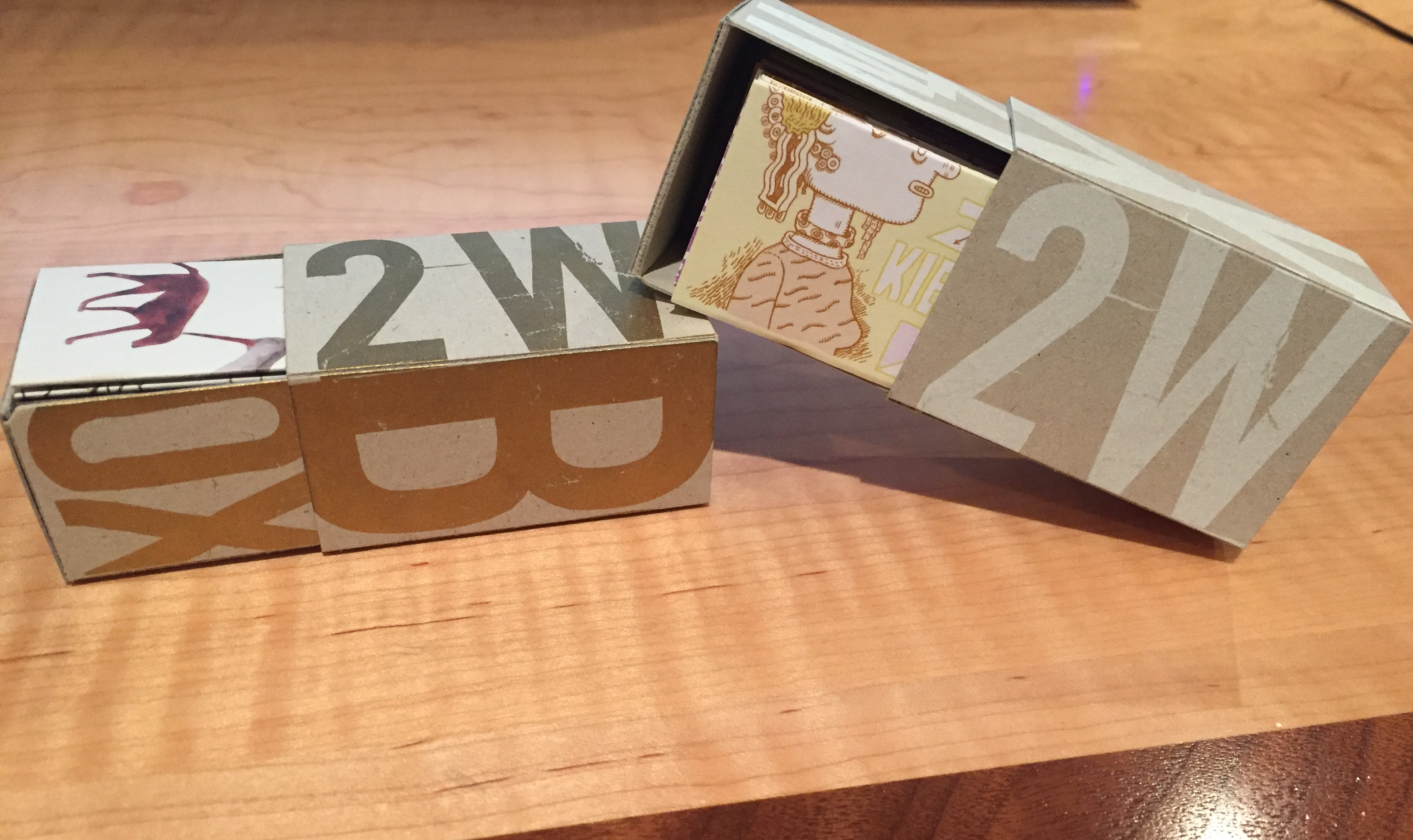 Almost two years ago, B.ü.L.b comix, a European publisher based out of Geneva, sent me a little box full of tiny accordion style comics. The 2[w] series, as they’ve been titled, are all 3.5 x 4.5 cm comics in an 11-sheet accordion. I’ve been thinking a lot about those little accordions, which all fit neatly into tiny boxes B.ü.L.b comix shipped alongside the comics with some other ephemera. This year will be  B.ü.Lb comix’ 20th anniversary, which is a feat few publishers in small press comics have managed. 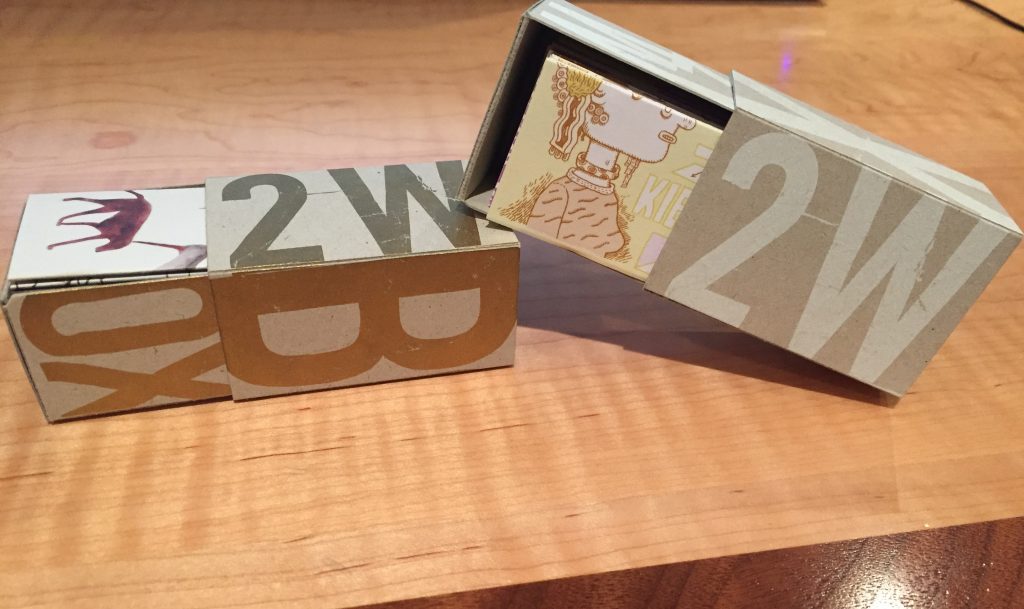 In between the time when B.ü.L.b comix sent me those little accordion books, Horizontal Press, a Brooklyn-based publisher, released two series of risograph printed “tijuana bibles” by some of alt comix up and coming artists. These two projects in aggregate have had me thinking about the forms that comics can take, and how that form affects the way we read and think about these objects.

What counts as the traditional comic size varies greatly based on your position on the planet, and the time you existed on it. In the USA we’ve had massive broadsheet pages all the way down to the pocket sized tijuana bibles of the 1930s. Over the last 70-80 years, the standard size for pamphlet comics has settled on 6.625 x 10.25 inches. It’s an easy size to read and carry. Mini comics and zines, being generally smaller than the floppy comic, were originally sized to be easily printed using standard office supplies, often 5.5 x 8.5 inches. Some creators, like John Porcellino, continue to make mini comics in those same dimensions. More recently, cartoonists/publishers have used the size of the book not for practical DIY manufacturing reasons, but for reasons of aesthetics, or perhaps in the case of the tijuana bible, for discretion.

But a comic’s construction can be as much a part of the art as the images and words instead of it. I’m reminded of the Weakly Comics’ Xtra Large Annual, which I reviewed last year. That book had a specific manic energy immediately evident in its construction. In comparison, the mini comics from Horizontal Press and the 2[w] collection take on a different dimension. Horizontal Press’ books are designed to mimic the original eight-pagers, and through that shorthand imply a lasciviousness. My joy in those Horizontal Press comics is that the lasciviousness they imply in form is often subverted or manipulated by the cartoonists art. The risograph printing is a nice touch – tijuana bibles were often printed quickly and in poor quality, and the risograph’s registration errors, and its modern day recognition as a cheap way to make color prints mimics that feature. Despite their celebrated bawdy humor, the tijuana bibles of the Great Depression and after were rooted in misogyny and white supremacy. Seeing the eight-pager recreated in a more progressive light while invoking its figure is a powerful visual metaphor. 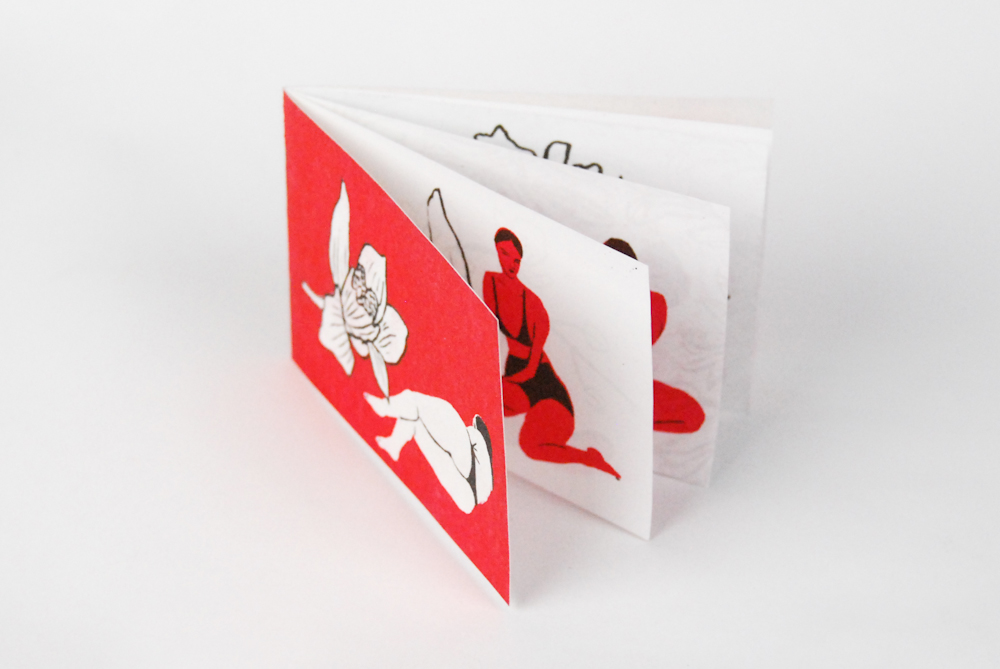 The 2[w] collection, in contrast, exists almost in a separate universe. The books themselves are similar to the leporello format that UK-based publisher Nobrow employs for some of its more illustration-focused projects, but miniaturized. These little “books,” along with their little boxes, invoke a feeling of wonder, like stumbling into the world of the Borrowers. How each cartoonist uses the concertina fold varies – some experiment with text, single stretched images, or pseudo-animation, while others use each fold as a separate page. In this form, these comics are small, minuscule even. But their small size makes them all the more intriguing. The boxes have been screen printed with many different colors of ink, but mine are gold and white; they are objects meant to be seen, noticed on a shelf and examined. It’s clear that B.ü.L.b has thought about the aesthetic and tactile experience of these comics, how the box interacts with the comics, and how the comics exist in this miniature world. And partially because of their smallness, these objects pull the eye in. Hunched over, the reader is almost obliged to analyze each accordion, carefully moving from fold to fold with precision, if not reverence.

Both projects, despite their large differences, are a celebration of the breadth of the form. Importantly, these comics invite readers to reevaluate their concept of comics. The dissonance between what is normal or expected and what can be is a tremendously valuable space.

Sequential State is made possible with the help of readers like you, who donate to our Patreon campaign. I’m trying to keep the site ad-free and I can do that with your help. Backers can get a variety of rewards, including a curated monthly comics mailer. Check it out!