TCAF (The Toronto Comics Arts Festival) torontocomics is less than 3 days away, which means yet again I’m
looking at books that are set to debut at the show. This year’s a little
different than last – I’ve
been prepping a bit more than last year, but that means more books I’m
interested in. I also am planning to pick up a few MoCCA debuts that I haven’t
gotten my grubby paws on yet. Here’s a my list of must-haves going into Saturday:

1. Mighty
Star and the Castle of the Cancantervater by Alex Degen adactivity from Koyama Press koyamapress –
Koyama Press has a few new releases at TCAF which should be of interest to you,
dear reader, but if I only get to pick one, it’s the offering from Alex Degen,
whose comic Junior Detective Files made my “Comics That Challenged Me in 2014”
list.

2. Lydian by Sam
Alden gingerlandcomics from Space Face Books spacefacebooks – I’m
interested in ALL of the books that Space Face is debuting at the show,
and I’m anxious to get my hands on Lauren Monger’s Sleepwalking which debuted
earlier this year. Lydian is a stark departure from Alden’s work as featured in It Never Happened Again, and bits and pieces have already popped up on tumblr.

3.  Lovers Only by
Mickey Zacchilli spideretc, Cathy G. Johnson cathyboy, and Sophia Foster-Dimino sophiafosterdimino from Youth in
Decline youthindecline – this collaboration comic between three of my favorite cartoonists
(all three were on the aforementioned list for 2014) is a slam dunk – my love
of shoujo manga is likely a contributing factor.

4.  SuperMutant Magic
Academy by Jillian Tamaki jilliantamaki from Drawn and Quarterly drawnandquarterly – I mentioned in  my review of Sex Coven that this was the year
of Jillian Tamaki, and I’m not the only one saying it. This will be the second
book Tamaki has had published this year, and it collects the popular
SuperMutant Magic Academy webcomic and brings it to a close.

5. Worst Behaviour by Simon Hanselmann girlmountain from Pigeon Press –
new Megg, Mogg, and Owl comics. I really don’t need to say much more than that,
but it’s worth noting that Hanselmann’s been on a tear with the comics that are
published weekly on VICE, and I’m hoping this is more of the same.

6.  For As Long as It Rains by Zviane zviane from Pow Pow Press powpowpress – this is a bit of a cop out, since  I’ve already backed the Kickstarter, but I think
it is tremendously exciting to have books translated into English for the first
time, whether that be Québecois, French, Spanish, Italian, what have you. Zviane’s For As Long As It Rains
looks like a moody, sensual, slice of life comic. Right up my alley.

7. It Will All Hurt #3 by Farel Dalrymple popgunwar from Study Group
Comics study-group – I got the first two issues of this book from Dalrymple in Study Group’s
Kickstarter project, and after really enjoying The Wrenchies last year, am anxious to pick up more of his work.

8. Towerkind by Kat Verhoeven verwho from Conundrum Press conundrumpresscanada – I’ve
been talking about this book for a while, but I’m excited to finally get a
copy. I’m also looking forward to getting other Conundrum Press releases,
including Max de Radiguès’ newly translated Moose.

There will be plenty of zines and other books available at
TCAF this year, and I’m excited to meet new people and see what’s out there – what’s on your list? 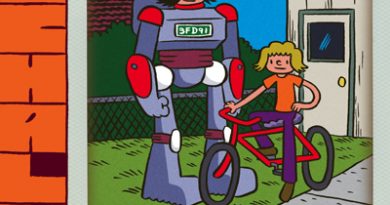