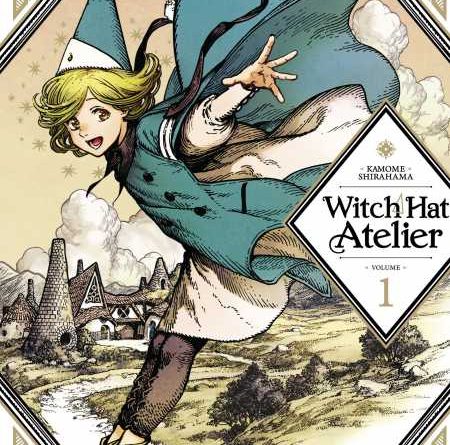 Comics are magic, aren’t they? That’s less of a question, and more of a realization; Comics have a profound power over those who read them, shaping their mental process, causing delight, and dread, wonder, and horror. I’ve devoted a lot of my life to the magic of comics, and I’m grateful for that. Art-making calls into being things that are profound and profane, using the will of the artist and their tools to create something entirely new. This concept is the crux of Kamome Shirahama’s delightful Witch Hat Atelier, the first volume of which was recently released by Kodansha Comics.

In Witch Hat Atelier, a country girl named Coco who works as a clothier’s daughter obsesses over magic. But in Coco’s world, a witch is born, not made, and so she feels relegated to the sidelines, wanting something she can never have. This “knowledge” is suddenly overturned when a witch named Qifery visits her mother’s shop and repairs a broken carriage using a magic spell. Coco learns that magic isn’t born into the world, but rather, drawn into it, using a special set of tools. This partial knowledge backfires, and Coco casts a harmful spell without understanding. Rather than erase her memory, Qifery takes Coco in as an apprentice witch.

Learning that the main character is special is the backbone of a wide swath of kids lit, whether it’s the use of Narnia’s magic wardrobe, the knowledge that you are the last of an ancient line of Old Ones in The Dark is Rising, or “You’re a wizard, Harry.” Witch Hat Atelier follows that timeworn formula, but Shirahama’s illustration elevates the premise to something otherworldly. These comics are beautiful, showing a clear mastery of inking in a way that few manga can. The hatching and stippling throughout Witch Hat Atelier is, mildly put, arresting. This mastery is most keenly observed with Shirahama lets loose during magical events. Seeing Qifery pull moisture out of the air using a magical device in order to drink is something short of miraculous, and it feels miraculous because of how beautiful the illustration is. The paneling and page design is similarly thoughtful, drawing the eye to Shirahama’s beautiful drawings, keeping the pace of reading slow and steady.

Witch Hat Atelier isn’t a slam dunk; it has a few plot issues in the middle as Shirahama rushes to show off Coco’s haphazard prodigal nature, which pushes the narrative faster than it needs to be pushed and stretches the believability of some of the characters. But the beauty of Witch Hat Atelier is that Shirahama goes in deep on the metaphor of art-making as magic, building on that over time. Much of magic’s mastery in Witch Hat Atelier is being able to copy images and draw cleanly, and initially Coco struggles with pen and paper, which she hasn’t ever used. Small rivalries make her life difficult, but The most satisfying emotional beat of the book is when Coco uses the techniques she’s learned as a tailor and cobbler to create a new spell that will get her through the first major challenge she’s had put in front of her. She integrates her own lived experience into a form where experimentation is discouraged, and creates something powerful and new. In that moment, it feels like anything is possible. Which, I suppose, is precisely the point.

I hope it’s quite clear to you that I am enchanted by Witch Hat Atelier – it’s a comic that wears its heart on its sleeve, but does it with such earnestness and beauty that it’s hard to put down. This is a story that will appeal to the young and the young at heart, with art that will appeal to nearly everyone.