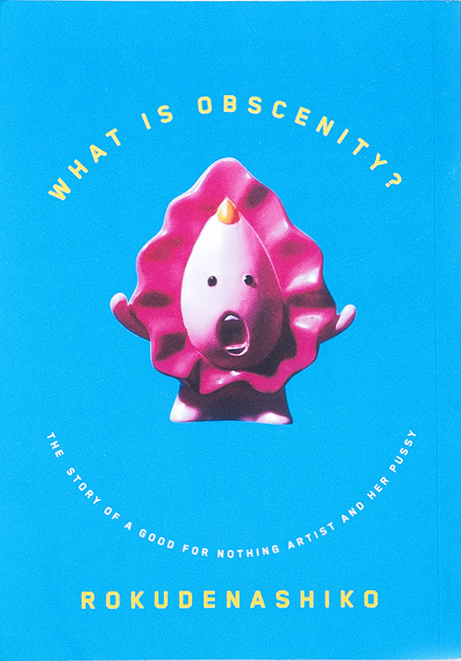 Reviews
December 28, 2016December 16, 2018 Alex Hoffman 0 Comments comics, Koyama Press, review, rokudenashiko, What Is Obscenity? The Story of a Good for Nothing Artist and Her Pussy

One of the big announcements leading up to TCAF 2016 was that Rokudenashiko would be in attendance to support the release of a new graphic novel memoir from Koyama Press in coordination with Massive Goods. Rokudenashiko is the artist world-famous for her manko art (manko is a slang word for vagina in Japan, like a more vulgar form of the word pussy in the US), including a working 3D-printed vaginal kayak and manko dioramas. I learned secondhand during the festival that there was concern that Rokudenashiko may be detained in Japan due to her sentencing immediately prior to the show. (I have no clue if these fears were substantiated or legitimate, but I heard murmurings from multiple people, so take that for what it is.) Despite being fined 400k yen (approximately $3.5k USD), she was free to leave, and one of my favorite panels from TCAF in 2016 was Rokudenashiko discussing her journey and her art.

Her manga memoir, What Is Obscenity? The Story of a Good for Nothing Artist and Her Pussy, shows us the development of an artist, her vision, and her oeuvre, as well as chronicles her experiences fighting a corrupt and nepotistic criminal justice system.

The book contains a mix of printed matter that contains Rokudenashiko’s comics, explanations of the Japanese legal system (including their fascist prison system), interviews, and court filings. Rokudenashiko’s comics work in general fall into a class of manga called documentary manga, and they eschew the glitz and polish of a Shonen Jump comic for an aesthetic that more closely resembles indie autiobio work from the USA. I especially appreciated the essays contained in the collection, which expanded the detail from the comics Rokudenashiko makes and highlighted some of the more glaring issues she faces in prison.

Rokudenashiko makes comics that are charming and funny, but I think what sets What Is Obscenity? The Story of a Good for Nothing Artist and Her Pussy apart is its fierceness. Rokudenashiko is bound and determined to fight against sexism and censorship of her art, and does so using the unconventional weapon of humor and cuteness. The comics in What is Obscenity? are a road-map through Rokudenashiko’s life, as well as her arrest and trial. The resulting work is an eye-opening look at the culture of Japan, the nature of censorship and privilege, and a protest document for our times. Recommended.