I first came across Lee’s comics via the web and Lee’s
animated web comic Thunderpaw; a
remarkably expressive view of the post-apocalypse through the eyes of two dogs,
in bright colors. Vacancy, a book that exists in the same shared universe with its own set of anthropomorphic animals is Lee’s
first major print comic. Coming by way of Nobrow, a publishing house that
publishes work of artists who have an eye for color and expressive visuals, Vacancy is a 24 page full color comic
that is part of Nobrow’s 17×23 project, and shares the lux print quality and
construction of Bianca Bagnarelli’s Fish,
a book from that same line that I reviewed last year.

Vacancy features 3
suburban animals trying to find food and survive moving between two human towns.
Simon, a guard dog, has been abandoned by his humans, while Cliff (a raccoon)
and Reynard (a deer) are trying to find some food in the suburbs. Alone, Simon
convinces the two to team up and become a temporary pack; but when the
pet/scavenger/herbivore team meets up with a real pack of coyotes, things get a
little hairy.

One of the things I love about Vacancy is Lee’s use of limited color palette. There’s a real sense
of the change of time throughout the book; sunset and dusk are easily differentiated
by the use of burned oranges and browns or teals and greens. Contrasts between
the foreground and these background colors (for example, Simon’s hoodie against
the orange of sunfall) give a sense of space.

Each of the characters in the book is dressed up, and Lee
uses the clothing each animal wears as a proxy for personality. Simon, with his
hoodie, white socks, and loafers, looks very much the little innocent boy.
Reynard, in his fully buttoned flannel, looks like a skittish prude. For such a
short comic, these small choices throughout make the book come alive. In a
delightful sunset chase scene in the second half of the book, the suburban
animals run away on two legs while the wild coyotes chase them on all fours, a
choice that emphasizes the tame versus the wild. We even get to see the remnants
of human intervention in these animals – one of the coyotes is wearing a
tracking collar so often used on predators that live close to human
settlements.

Humans are completely absent in this world of Vacancy, and it’s clear that the animals
are surviving in a post-war society where humans have essentially disappeared.
And while the outfits and the talk anthropomorphize the animals somewhat, they
all still act like animals, and seem to see the world in the way an animal
would.  Simon is much more a guard dog,
than say, Garfield is a tabby cat. The coyotes still get spooked by the
suburbs, even though people are long gone – memory without the ability to
comprehend the new difference, another indicator that these are indeed animals.

Like Lee’s other comic, Thunderpaw,
Vacancy explores the relationships
between animals and people, how we interact with the known and the unknown, and
finding community in unexpected places. A book that looks at the world through
animal eyes, Vacancy is nevertheless
a very human story, and one worth reading. Recommended.

Jen Lee repoghost is a cartoonist and illustrator based in Idaho. Lee’s ongoing webcomic Thunderpaw, can be found at this link. You can support Lee’s work on Patreon.

Nobrow
Press (tumblr: nobrowpress )
is an independent press based in London that publishes art books and comics. 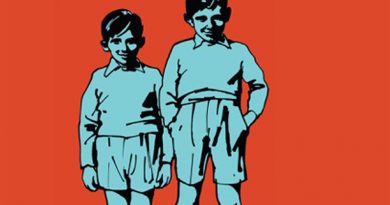