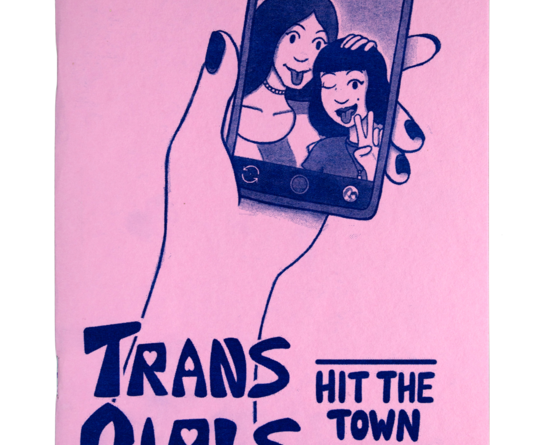 As a cis-gendered white man, I have the privilege of “public privacy.” I’m not going to get yelled at or threatened with a police call if I’m talking in another language in a coffee shop. I can walk down a street by myself and not get harassed or catcalled. I can get in a rideshare or a cab and have a reasonable expectation that things won’t go sour. I can get on the bus or train and not worry about physical or sexual violence. I can mind my own business and people will mind theirs. Honestly, I can basically go out and do whatever I want and not worry about people invading my personal and mental space. Unfortunately, that experience isn’t universal, and Emma Jayne’s recent comic, Trans Girls Hit the Town, illustrates that point. Recently published by Diskette Press, Trans Girls Hit the Town is a 32-page risograph comic about Winnie and Cleo, two trans women who are going out for a fun night out. But that experience quickly goes from fun to difficult, and reveals the struggles of trans women just trying to exist in the world on a day to day basis.

Jayne sets up the evening innocuously enough; Winnie and Cleo get dressed up and then meet on public transit to go out for dinner a local dinner, then have some drinks at a local arcade bar. Along the way, they are misgendered by the cashier at a restaurant, Cleo is harassed by a drunk chaser at the bar, and things start to go downhill from there.

One thing that I think makes Trans Girls Hit the Town work so well is the way Jayne sets up the reader’s initial perceptions of her characters. Winnie, a woman who transitioned before Cleo, appears to be the more confident of the pair, while Cleo clearly has a lot of fear and anxiety about being in public as a trans woman. Jayne uses these perceptions and twists them a little in the third act of the book, and makes the emotional progress of the story hook you. And Trans Girls Hit the Town emphasizes how different each transition experience is, and how that sometimes those differences can cause conflict between people who would otherwise be united.

There’s a warmth to Trans Girls Hit the Town, and a gentle humor that levies what could be a pretty dark comic. Winnie and Cleo get dinner at Bratty Bottoms and play an arcade game called Naughty Dan’s Smelly Hand, and little notes in the narration are enough for a few wry laughs.

Jayne’s illustration is cute and engaging, and fits the material well. I think specifically Jayne shows an understanding of human body language that other cartoonists miss. Cleo’s anxiety is easy to read, and the engaging nature of the work makes her a person you want to root for. Cleo’s struggles in public are therefore all the more harrowing, because you’re on her side and you want her to have a good time.

Where the comic shines most is with Jayne’s writing. Both characters are believable, and there’s a natural cadance to their dialogue that feels exactly right. I’m reminded of Hartley Lin’s dialogue in Young Frances, which I felt was particularly excellent.