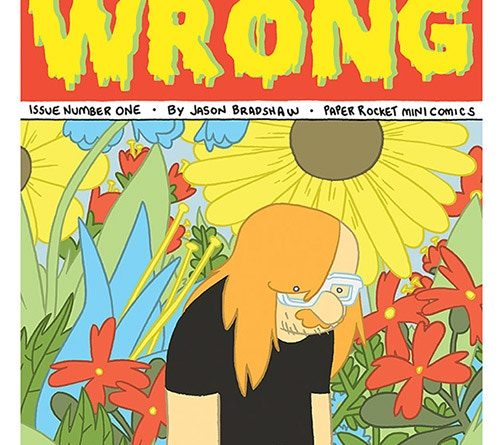 Paper Rocket Minicomics puts out a few books each year, and generally runs a small-ask Kickstarter each year to get them printed. This year the books were a new Missy comic from Daryl Seitchik and a reprint of Jason Bradshaw’s Things Go Wrong #1, originally published as Bore #14, from his zine series. Bradshaw is based in Toronto, and the idea of the reprint was to increase Bradshaw’s readership south of the border. Things Go Wrong #1 was only available to non-Canadian readers. I got my copy in October and I’ve been mulling it over since.

Bradshaw’s main character James is a painter whose life has gone dramatically downhill. Alone and isolated, he gets sick with a strange gastrointestinal disease, and simultaneously loses his will to do his personal painting. He squeaks by painting murals for local businesses, but this only exacerbates his self-loathing at his inability to paint on a canvas for himself. What’s worse, when James is given a prescription that will cure his disease, he stops taking the medicine. And so, instead of getting better, things get worse.

Things Go Wrong #1 is a remarkably nihilistic comic that seems to be less about some strange parasite than about chronic depression, a disease that’s very common. James’ life falls apart, he loses the ability to take care of himself, loses pleasure in things that he used to enjoy, and can no longer make art that is meaningful to him. He doesn’t want to live, really, and by not taking the medication, it’s implied that he is fulfilling that goal of personal oblivion, one slow day at a time.

Of course, it’s not as interesting to talk about depression the way you would talk about having a parasite, and it’s not as cut and dried. The linkage that Bradshaw makes between depression and parasitism is an interesting one; the theme of fungus comes up over and over in the book, either on canvases painted by James, or in the front and end papers. The idea that depression is something that breaks us down into our constituent parts and then absorbs us is a pretty potent metaphor, and one that largely works in the context of this comic.

It seems to me that Bradshaw draws this thin veneer over a comic about depression in order to increase what I would call a sort of busy comics detritus. Each page has stacks of pizza boxes and takeout containers, paint and God-knows-what-else stains, all evidence of a decaying life and a person who has lost the ability to adequately care for themselves. Bradshaw’s cartooning is a pleasant mix of this busy-ness and a buoyant style that feels inspired by Fleisher and Gottfredson. The pages, originally in black and white, have been reprinted in a two-tone with light blue pulling shading duty.

If I had any overarching thoughts about Things Go Wrong #1, it’s that the book, despite its nice drawings, is a pretty tough read, at least emotionally. I called the book nihilistic, and it is, and future issues seem to promise something even more taxing. While I appreciate the work on its artistic merits, it’s not necessarily the most subtle comic; as advertised, things do go wrong. Whether you appreciate that and want to read more depends on how much more you can tolerate. 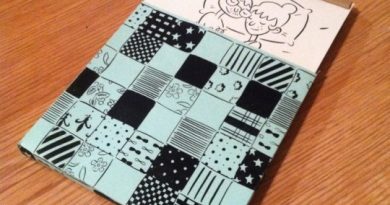