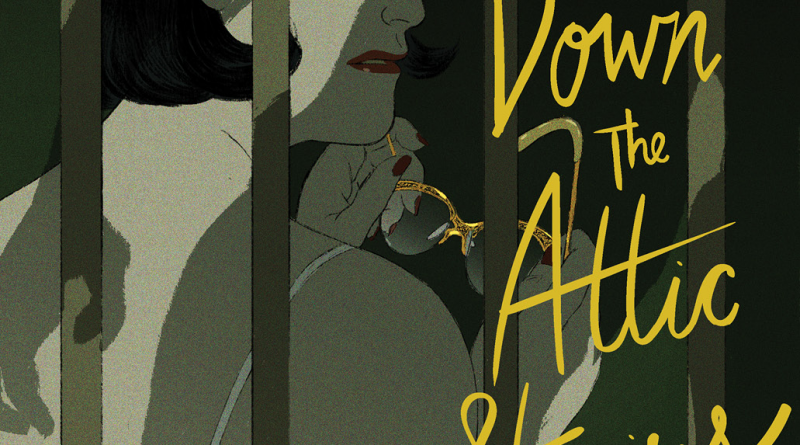 I’ve never loved horror movies. I’m not interested in jump scares or splatter effects. But I love horror comics, often because they force their readers to re-examine the world and their assumptions of it. And that’s exactly what Celine Loup‘s graphic novella The Man Who Came Down the Attic Stairs does. Loup published a more explicit version of the comic as a zine, but has edited and expanded it this year for publication with Archaia, the Boom Studios imprint. Loup’s slim European-style hardcover album features Emma, a new mother, struggling to raise her baby daughter Roslin while her husband becomes unsettlingly detached. Afraid that her husband Thomas has become possessed or replaced by some ancient horror, or perhaps that she is going mad, she starts to see a psychiatrist at her husband’s insistence.

The first you notice about The Man Who Came Down the Attic Stairs is the beauty of Loup’s illustration and the setting for the comic. Each page is stunning, an impressive use of inking and toning. Loup uses a delicate line to great effect, and the ink washes throughout the book are effective at conveying its menacing tone. Loup’s images are often jawdropping, both for how expressive they are, and how oppressive they feel. Much of that oppression comes from Loup’s powerful lettering. Anyone with a colicky newborn knows how bad the wailing can get, but in The Man Who Came Down the Attic Stairs it’s worse – Roslin seems to be attuned to some unnatural force from the attic nursery, and never seems to stop crying. The lettering of those cries is everywhere, crowding the page and making the reader claustrophobic and unsettled.

Loup manages to pack a lot into a very short comic, and ramps up the tension over time, until it reaches a screaming point. Thematically, the book interrogates postpartum depression, and the weight of raising a child alone while being expected to manage a household without help. We see Emma under enormous pressure to comply with a misogynist standard emphasized by the era in which the comic is set. Thomas wants an immaculate house, a beautiful wife, dinner on the table when he gets home from work, to have no hand in their childrearing, and to have sex whenever he wants. At the beginning of the book, Thomas is more attentive to Emma, but it’s clear that he sees her only as a means to his own ends. And while yes, this is a period piece, Loup clearly demands that readers reflect on their own time and lived experiences.

To some extent, The Man Who Came Down the Attic Stairs is also about twilight sleep, a form of pain management used in obstetrics between 1899 and the 1960s. During the timeframe that The Man Who Came Down the Attic Stairs is set, childbirth was considered pathologic and unnatural, and the majority male obstetrics and gynecology community had wide disdain for the female body. The drugs used in this procedure left women in a dissociated state, and impaired the mother’s ability to bond with her child. In this state, women would often thrash on the delivery bed, injuring themselves so much that they had to be restrained and wrapped with blinders and cushions. At one point Emma calls herself “an unnatural thing” for not feeling love for her child, but the doctors who were supposed to help her have irreparably harmed her, and her relationship with her daughter. It’s also heavily implied that Thomas himself is an obstetrician, and that he may have delivered Roslin, which further complicates the historical truth and the personal truth of the story.

Another key theme of The Man Who Came Down the Attic Stairs is Emma’s isolation. Emma is isolated by her husband’s purchase of an ancient mansion, kept from the rest of the people in town. What looks palatial in the first scenes of the book reveals itself as a beautiful prison. She’s so busy with housework and overwhelmed by Roslin’s crying that she can’t seem to have time for any other relationships. When she begs her husband for help, he sends her to a psychiatrist rather than change a dirty diaper. The psychiatrist is clearly working under Thomas’ orders, because he’s not even charting her case; his writing of her mental condition is just scribbles on a blank page. Men are the only people she is sanctioned to see by her husband, and the only people she physically attacks are female. (That’s another echo of the way patriarchal systems damage women, by pitting them against one another. This theme reverberates throughout much of Loup’s work.)

10/21/19 – 6:30 PM EST EDIT: In an after review comment on the work on Twitter, I learned from Celine herself that one of my deeply held convictions about The Man Who Came Down the Attic Stairs was not readily expressed by most critics. So I’ll be blunt about it. There’s a clear thread throughout the book, sensation of doubt. There’s a reasonable question to ask about whether or not Emma is a reliable narrator. There’s a reading of the comic that suggests that she’s psychotic, that everything that happens in the book is all in her head. But that reading runs against the grain of all of the thematic work that Loup has built on in The Man Who Came Down the Attic Stairs, and in my view is a false choice. In my reading, Emma is the only adult character you should trust. The things that happen, however terrible they are, do happen.

So yes, The Man Who Came Down the Attic Stairs is about postpartum depression, but it’s also about misogynist violence against women. It’s the kind of violence that rarely leaves physical wounds. Thomas’ demands of her, and then his treatment of her when he doesn’t get what he wants, is unpardonable. That violence culminates in an ending that is unforgettable.

If you enjoyed this review and want to support the work of comics criticism internationally, please support my latest venture, Fieldmouse Press. Fieldmouse Press is a 501(c)(3) nonprofit comics press, run by a group of talented, experienced critics. We’re collecting donations to launch our first publishing project, SOLRAD, in January 2020, and we could use your assistance. All donations are tax-deductible. Thanks!

Review: The Amateurs by Conor Stechschulte