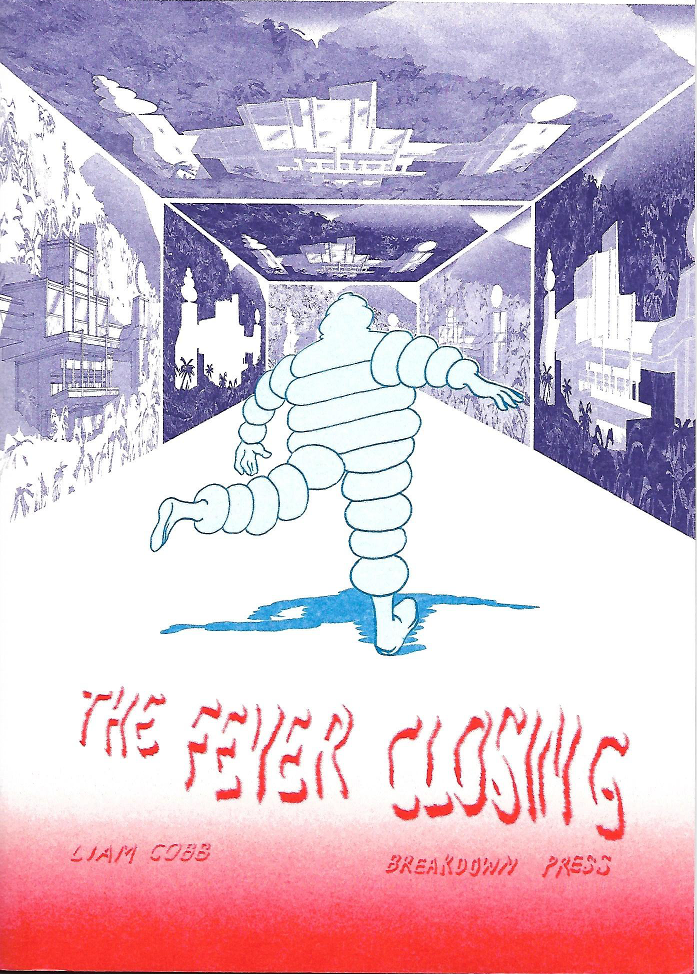 It’s hard to stay current with all of the independent comics scenes across the English-speaking world, but I have recently been keeping track of Liam Cobb, a UK-based cartoonist whose stock seems to be on the rise. Cobb has done quite a few self-published books over the last two years, but The Fever Closing is his first title from Breakdown Press, and I recently got a copy from Seite Books in LA. Cobb’s work has garnered a lot of praise in Europe, winning the 2016 ELCAF Audience award for his self-published book Shampoo, but is relatively uncovered in the US.

The Fever Closing is a 20-page saddle-stitched risograph comic printed in purple, yellow, and blue, with composite colors made from blending the three inks. The book’s star is a man traveling to an exclusive island costume party. While on the island, he changes into his costume – a replica of the Michelin Man costume, and heads to the party. But when he gets to the mansion on the island, and finds out he’s one of the only people in costume, things take a dramatic turn.

Cobb’s premise for The Fever Closing verges on the absurd, but this follows in the same vein as his other recent comic Green Graves. These comics have a feeling of otherworldliness; they are hallucinatory and violent. The violence of The Fever Closing comes at the end of the book, acting as something of a punctuation mark, or the spark that causes the explosion. Throughout, the unwavering smile of the Michelin Man emphasizes the surreal nature of the act perpetrated, its unblinking eyes as witness. The last page, an image of clear skies, calm waters, and clouds on the horizon, throws this act of violence into contrast with the magnificent vistas Cobb has developed; in a way, shrinking it down to size, and in another, amplifying its terribleness.

Cobb’s art in The Fever Closing is remarkable; there’s this two page spread as the main character comes across the mansion in the middle of the jungle that is breathtaking. Cobb’s line work varies, at moments thinner and more precise and at others sketchier, often when the image gains density. There’s a crowd scene where lines overlap, as though characters aren’t completely opaque, which, in its own way, mimics the way crowds move and change over time. The color choices were lovely – using purple and blues for pronounced lines, and smooth gradients. I especially liked the implied shimmer of gold using yellow as a highlight color on trim and in other places.

I am looking forward to seeing more work from Cobb with Breakdown Press. The Fever Closing is a strong opening salvo for new readers to Cobb’s work, and a comic you shouldn’t miss.

Sequential State is supported by readers like you. If you thought that this reading experience was worth a dollar to you, please support us. Thanks!