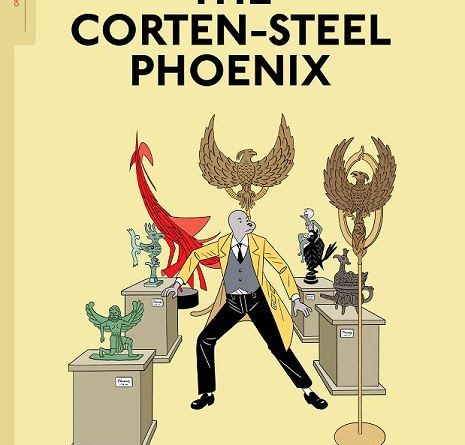 I’ve been working and reworking a review of Rich Tommaso’s Spy Seal since the trade paperback came out in early 2018, and I still have trouble knowing what to make of its publication. The comic was the subject of a brief burst of commentary from places like Comics Beat and Bleeding Cool, who saw the poor sales of the individual issues of Spy Sealas a way to make commentary about the struggling direct market. Tommaso’s commentary on Facebook is still available to read, and it shows an artist struggling to make it in the world of comics. While it’s clear that Tommaso took a creative risk with this series from Image, it’s hard to know if that risk paid off. The series came out to some fair critical acclaim from critics like Tegan O’Neil. I’m not sure what the collected edition has done in terms of sales, but it’s a comic that is worth thinking about, given that the drama that surrounds the book is an essential picture of the American comics market.

With Spy Seal: The Corten-Steel Phoenix, Tommaso introduces us to a character he designed as a child. Malcom, an anthropomorphic seal, is drafted into MI-6 after he foils a political assassination at a local art gallery. As a former military man, he bumbles from adventure to adventure across 96 pages of Ian Fleming-inspired spy comics, attempting to foil the plot of a British-turned-Soviet double-agent. Set in the 1960s in an anthropomorphic world, Spy Seal riffs on the early James Bond films in a loving, uncomplicated way. Importantly, Spy Seal is not just a spy thriller; it’s also a pastiche of Belgian cartoonist Hergé and his ligne claire style. You can see it as early as when you pick the book up off the shelf – rather than being in a traditional American comics format, the collected Spy Seal: The Corten-Steel Phoenix comes in the dimensions of a Franco-Belgian bande dessinée album.

I’m not as familiar with Hergé as I probably should be (someone come and take away my comics criticism license, quick!) but I can see why the ligne claire style would be attractive to hommage; Tommaso’s drawing is already fairly clean, and the simple block color styling makes for an attractive-looking book. I’ve appreciated Tommaso’s drawing ever since I started reading his comics, so call me a little biased, but it’s even more clear in Spy Seal: The Corten-Steel Phoenix that the guy can draw. Ligne claire isn’t a style you can hide behind; your drafting has to be impeccable, because if it’s not, it’s very very obvious. Tommaso’s lines are pleasant and the whole book feels right, at least from an illustration perspective.

From the perspective of the story, Spy Seal: The Corten-Steel Phoenix is purposefully direct and simple, maintaining the Hergé comparison. The complicated twists and turns of the spy thrillers that are popular now are remarkably absent. We can see that all the way through the book and up to the ending, where one of the hidden facts of the book is revealed, Scooby Doo style, that explains one of the mysterious characters throughout the comic. All of this makes Spy Seal more of a romp than a thriller, but I think that works in its favor.

What doesn’t work in the books’ favor is Tommaso’s constant over-writing. There are some panels in the book where text almost completely fills them, and I found some of the early pages of the book to be a bit of a slog. In the middle of the book, Tommaso lets some of his pages open up, especially when Malcom gets paired up with a veteran spy named Kes. There are a few sequences that are delightful, full pages where there’s hardly any text, and that’s where Spy Seal really gels.

Those pages are too few, unfortunately, and I think ultimately it’s this imbalance between writing and illustrating that makes the book a tough read for me. When Tommaso lets his pages breathe, some spectacular things happen. I’m uncertain if Tommaso will ever take another crack at Spy Seal, but I think it’s a property with a lot of promise. It’s fun and cleverly direct in its storytelling. I loved everything about Tommaso’s illustration, the page layout, the colors, the line. The book is such an attractive comic to look at. But many of the pages are strangled with text. It’s because of this imbalance that Spy Seal: The Corten-Steel Phoenix wheezes, not sprints, across the finish line.