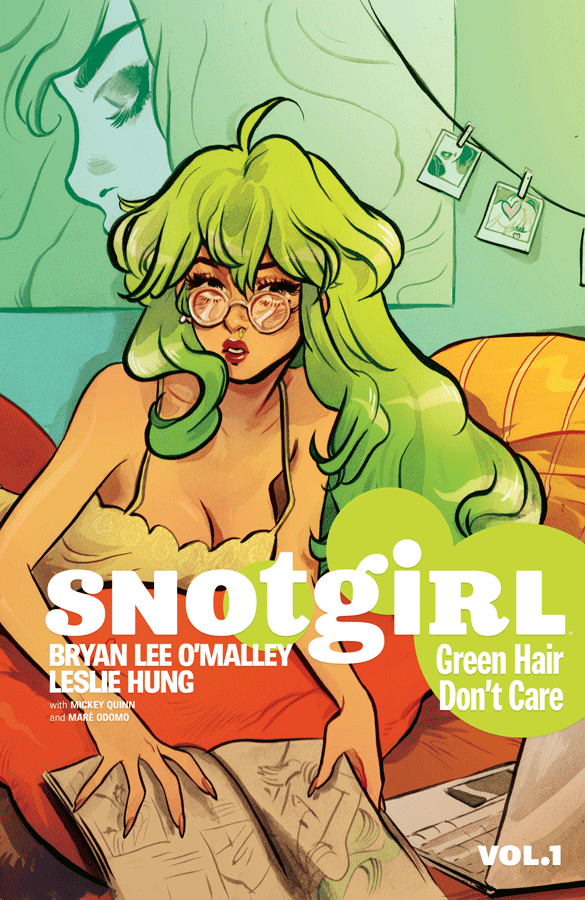 Snotgirl is Bryan Lee O’Malley’s latest project, and his first monthly comic book. I heard the hubbub about the book when the first issue came out, but I recently picked up a copy of the first trade paperback to see how the story held up. I enjoyed Seconds,  ’Malley’s latest graphic novel, but I find myself utterly perplexed by Snotgirl.

Snotgirl is about Lottie Person, an Instagram-famous fashion blogger. She nebulously makes money off of her smart style and good looks, but behind a veneer of being all put together, she secretly is a shallow mess, paranoid that all of her friends hate her, and fearful that everything is going to fall apart at any second. She also has extremely severe allergies, which affect her ability to enjoy life outdoors. When a new allergist comes along with an experimental drug which will solve her allergy problems, she jumps at the chance for a new Lottie – but it turns out, new Lottie might have killed someone?

Lottie is yet another antihero in the recent parade of antiheroes, and the archetype is generally hard for me to read. I made it through a season or two of Breaking Bad until I got sick of it, and had to force myself through the first trade paperback of Snotgirl. Lottie has a pile of character flaws and no redeeming moments throughout the comic – she doesn’t need these things to be an interesting character (and she is interesting), but I’ve had my fill of antiheroes. The theme that O’Malley is exploring here is the constructed online identity, which feels like it might have been unique 5 years ago, but the idea of putting on your best face for Facebook and deconstructing that is now a part of the zeitgeist.

The book as a print object is much nicer than all of the other Image paperbacks – this one has french flaps and glittery embossing on the front cover, so it feels a bit less thrown together, and I love it when these sorts of details make the final cut. O’Malley used an obi-band dust jacket for Seconds, which was a nice touch, and this follows in that same line. I’m also extremely impressed with Hung’s art, which has an almost manga-esque oscillation between detail and simplicity based on the emotional tenor of the scene. Quinn’s colors are also quite wonderful, especially in extremely tense moments where red gradients sneak into the color profile or Lottie’s eyes flash red.

I think I could read more of Snotgirl if it weren’t for the extremely farfetched premise the book lies on. Allergic rhinitis is one of the most common diseases on the planet, and no matter what allergist you go to, you aren’t going to go from zero medicines/avoidance of allergens to experimental new therapy at the drop of a hat. Even a box of unused nasal sprays, pill bottles, and other stuff lying around Lottie’s apartment would have gone a long way to selling the need for a severe decision like starting experimental drug therapy. It feels like O’Malley didn’t put in the research on this point, and that’s a problem, because despite the soap opera and the juicy mean girl interaction throughout the first five issues, it is the drugs that the intrigue and paranoia are rooted in.

As it stands, Snotgirl is lovely to look at and weirdly farfetched. A little research would have gone a long way to making this book more cohesive, and in the end I couldn’t suspend my disbelief despite my love of soap opera antics. While some folks are going to love Snotgirl, it just wasn’t to my taste.

Sequential State is supported by Patreon – if your reading experience today was worth a dollar to you, please subscribe! There are some great patron gifts, including a zines and a curated monthly mailer.