This may be a partial heresy, but I’ll be as up-front and as honest as I can: I’ve read 1 volume of Scott Pilgrim, own the rest, and haven’t finished them. I never saw the movie. So, despite knowing about O’Malley’s work, I haven’t really been immersed in it until this point – the enthusiastically awaited Seconds, a project many years in the making that’s had a lot of comics people excited. And now, having read Seconds, I’m also excited – excited to go back to Scott Pilgrim and finish where I left off.

Seconds is a 336 page hardcover book with partial dust jacket printed in lux full color on matte paper featuring Katie Clay, a very talented and ambitious chef who has worked hard to build a great restaurant, Seconds. Because she has no ownership in the business, she has set out to build her own restaurant with a partner, and she’s running into walls. Mix in a current fling with the cook, an ex-boyfriend she still pines over, and a bunch of “baby” co-workers she doesn’t really know, there’s a lot that can go wrong… and does. But when the house spirit of the building her restaurant is in gives her a chance to fix her mistakes with a magic mushroom, her life takes multiple directions for the better and/or worse.

While Seconds is a departure from previous work, it is unmistakably the work of Bryan Lee O’Malley. The in-jokes, the witty dialogue, and his casual breaking of the fourth wall is reminiscent of one of my favorite cartoonists, Mitsuru Adachi, but is immediately recognizable from Scott Pilgrim. O’Malley’s art is clearly influenced by manga and Osamu Tezuka, and while it still maintains much of the same look as Scott Pilgrim, it feels like a cleaner, stronger version of his previous work. Katie especially has the kind of hair that only shonen manga could love.

The reason Seconds works as well as it does is due its strong leading lady Katie, a character who is really well-developed. Despite her flaws, Katie is very emotive and charismatic, which makes for a fun, engaged read. Backing up his characters is a great setting and some wonderful world-building. The city Katie lives in feels real, feels right. O’Malley’s paneling and strong eye for flow are evident – Seconds is a quick read despite its length.

I like the running theme of “seconds” that O’Malley is playing with throughout this book – it’s a book about second chances, a book that reminds us that some of the most important things we do (or don’t do) happen in seconds. It also alludes to the second portions we get when we enjoy food. The idea of food is also central to Seconds, in that eating is basically what the story revolves around, whether that is customers eating food at Katie’s restaurant, eating magical mushrooms in order to reset time, or food given to the ornery house spirit.

Fans have been waiting a long time for Seconds, and as a relative newcomer to Bryan Lee O’Malley’s work, I can say with relative ease that this book is one of the best to come out in 2014. It’s a book that will stick in your craw for a long time, make you think more about the way you live your life, and most importantly, make you ask for seconds. Recommended.

Notes: Sorry for the wretched scans. My scanner isn’t equipped to manage a big book like Seconds, and I try as hard as possible not to damage a book when I scan it, so these turned out a little blurry.

Bryan Lee O’Malley can be found at radiomaru and at his twitter handle here. Seconds was published by Ballantine Books, an imprint of Random House. 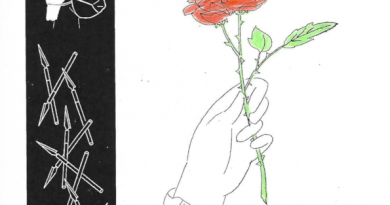