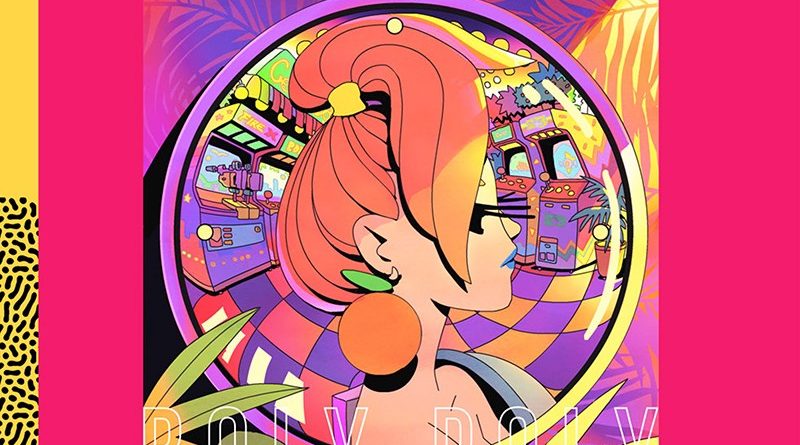 There are some books published every year that have a visual impact, books that say, “pick me up and read me!” One look at Roly Poly: Phanta’s Story, and you can see why this is one of those books. The book has a strong visual sensibility, beautiful colors, and a style influenced by cyberpunk and the washed sheen of a well-executed commercial. Daniel Semanas, an animator from Brazil who works for MTV among other clients, brings the styling of his primary artform to comics in this debut graphic novel from Fantagraphics.

The story of Roly Poly: Phanta’s Story is about a young woman in a competition with her brother to become more popular. In her quest to live life “on hard mode” in Neo-Seul, she enters an arcade-like underworld to obtain “wishing stars,” a sort of hallucinogenic drug that also grants its user their wishes. Phanta gets what she wants, but must fight her way back out of the underworld if she wants to keep her wishing stars and gain the popularity she so desires.

Clearly inspired by the styling of k-pop and video games, Roly Poly combines elements from both in its formal construction. Roly Poly has an eye for formal deviation, and the results are often pleasing. Semanas uses some inventive graphic design to do wordless storytelling, using image feeds, fact sheets, and contents of backpacks to give readers information they wouldn’t otherwise have. There are some interstitial pages that look like loading screens, while others give loadouts on character possessions. Meanwhile during a long stretch of fight scene that takes up the better part of the book, Semanas breaks down traditional paneling in inventive ways.

The entire book is drenched in video game motifs and there are a lot of social media references; Instagram is the most clearly referenced throughout, and that platform’s reach throughout the book forms the backbone of what is clearly meant to be a story about anxiety caused by the connectedness of social media.

With that in mind, Roly Poly moves and breathes more like animation than a comic, and its pacing is such that getting through the book is quick, almost breezy. Juxtaposed against the book’s lush backgrounds and detailed illustration, the storytelling is minimal, at best a vehicle for Semanas to keep the action coming and not stop to take a breath. And to be clear, Semanas’ art in this book is breathtaking; his candy color palette and striking setting design are remarkable. But the work isn’t written or designed to let the eyes linger on the page. Semanas relies on visual cues and graphic design to deliver information, which works to some degree. But without dialogue to hold the eye in one place, the pages fly by.

With a nonstop action and very little dialogue, Roly Poly has the consistency of cotton candy (that’s not a positive, if you’re wondering). Semanas’ character writing is the most atrocious sin of the book. Phanta is a wisp of a character, a pile of stylized eye-liner and a bad bitch attitude. Every character is the same; style but no substance. Phanta’s journey through the book and her competition with her brother don’t really make sense as an examination of human desire and the anxiety of the social internet. And Roly Poly feels too “on the nose” to act as satire. It just feels like a very pretty video game has had screenshots printed out and bound up in a nice hardcover book.

It’s not lost on me that all of the characters in Roly Poly are female (minus the primary antagonist/frenemy character). And if the subject matter is anxiety around the social internet, Roly Poly thereby plays into the worst stereotypes of the current cultural moment. Phanta, one of the only few named characters, fights karate style against a faceless hoarde of young women, all after the wishing stars she’s claimed. How can you make a comic like Roly Poly without implying that young women are vacuous and popularity obsessed? Even if everything is blown out and made into a bigger spectacle, all the women in Roly Poly are essentially fighting a life or death battle to have the most Instagram followers or be in a k-pop band (because these are the only goals in this wonderland, to be popular, and to be seen being popular). Roly Poly implies that these characters, and thereby women in general, have no interior lives and only exist to try to become popular.

And, if we’re being honest, even the visuals are suspect. When the reader isn’t looking at the beautiful backgrounds and environments of each shot, Semanas makes sure that the reader’s eyes are trained on Phanta’s body in action. A opening shot of Phanta mounting her motorcycle makes this abundantly clear. It’s not clearly T&A, but it feels lecherous. The compromising positions, her clothing, and all of the punching, kicking, and spinning, feels objectifying, even if the book avoids the cliche of manga-inspired fan service. There’s nothing as blatant as women taking off their clothing, but there doesn’t need to be; the male gaze is hyperactive in this book.

If there’s anything you can say about Roly Poly, it’s that it has style. Perhaps you could call it a visual panache. But Roly Poly with all its neon  cyberpunk-inspired visuals is just like the cola that is the main character’s namesake. Phanta (Fanta) is bright orange, sugary, and completely devoid of nutritious value; drink enough, and you’ll get ill.