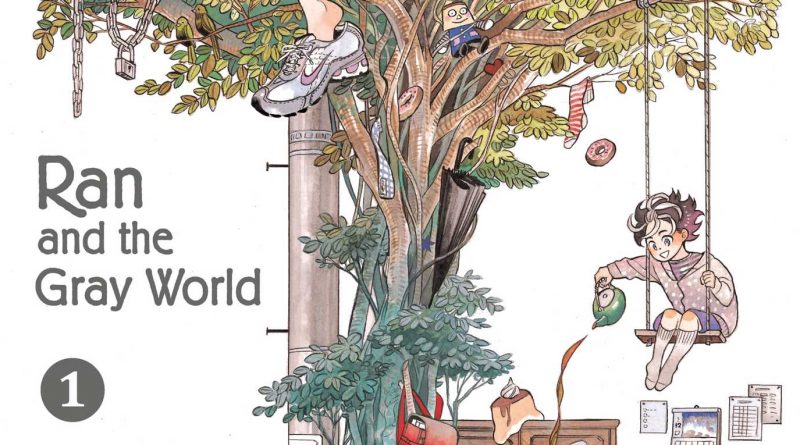 The first volume of Ran and the Gray World was one of the first Japanese language books I ever purchased. It’s a series that has long held my fascination; the whimsical setting piqued my interest, its use of magic so completely different from other manga in the fantasy genre. And importantly, the cover is beautiful, which means a lot when you can’t read Japanese. It was a book I included in many licensing requests, and due to its publication in harta magazine, was available to a selection of publishers. Apparently I wasn’t the only one interested in Ran and the Gray World, and the series was picked up for licensure by Viz Media earlier this year. The first volume of the series was recently released, and I’ve been excited about getting an official translation – previously I could see the images in my Japanese edition but not understand the writing along with them. The big question I had going into this first volume was this; would Ran and the Gray World live up to the reputation I had built up for it? Would it meet my expectations?

Ran is young magician in a family of magicians, each with various powers. As the youngest of the family, Ran is learning to be a magician, and has better control of her powers when she wears a specific pair of tennis shoes, which allow her to temporarily grow into an older version of herself. Her mother Shizuku seems to be a grand magician, someone with extraordinary power. She protects the town where the family lives but must constantly be on duty at a giant set of ominous double doors. Because of her duties as a guardian of these doors, she is essentially absent from her children’s lives. Ran’s older brother Jin resents his mother for this. Meanwhile their father tries to keep the peace and nurture his children without smothering them.

Part of the fascination I have with Ran and the Gray World is how well Aki Irie conveys the absolute strangeness and wonder of magic. All of this was fairly obvious when I first flipped through the Japanese edition; Irie is an excellent draftsperson, and crafts meticulous and beautiful scenes where giant cakes and fruits fall on to peoples’ houses, or boxes sprout heads and wings, or where young men shapeshift into wolves. But more than just the magic, Aki Irie’s art is much like that of superstar mangaka Kaoru Mori. Her backgrounds are detailed, sometimes obsessively so. Her characters’ faces are expressive and bright, and have a charm that is hard to deny. Like Mori she has an appreciation for the human body in motion, and expresses the physicality of her characters in ways that few cartoonists are able to muster. Irie also has a good mastery of pacing and uses her two-page spreads intelligently.

Ran and the Gray World is relatively slow moving after its initial chapters, which may turn some readers off. In some ways, Ran and the Gray World is more of a slice of life comic than it is one driven by conflict; the biggest source of plot propulsion is from Ran’s desire to see her mother. She works a lot of different ways out to accomplish this – by hitchhiking, by flying on a hot air balloon, all of which inevitably require that she be rescued by her family members. Ran’s power puts her in awkward positions – she has the ability to be physically older and more powerful, but her immaturity means she has a lack of understanding about the implications of what is going on around her. One of the major themes of the work is this tension between Ran’s power and naivete, and how growing older changes who we are and how we see the world (and, importantly, how the world sees us). Ran’s shenanigans are partially endearing and partially worrisome. Her older brother Jin is constantly harried, trying to keep Ran out of trouble and keep her out of the shoes that give her the power she needs to get in trouble easily.

One of the major sources of magic in Ran and the Gray World is clothing; Ran’s dirty sneakers are the major key in the book, but we also see Jin step into a hairy cloak and transform into a wolf, and their father put on a feathery garment of some kind and transform into a bird. While clothing isn’t the only source of magic in the book, Irie suggests that power lies in transformation; that what we can do is linked with how we present ourselves. How people choose to treat this transformation is telling; Jin’s wolf-cloak is stored in a heavy box, locked with multiple locks and chains, whereas Ran’s sneakers just lie around the house. How comfortable are we with the power we can take for ourselves? Irie asks the question, but doesn’t give a sound answer.

Ran is a specifically interesting character precisely because she is more likely to use her power than the more conservative men in her family, and is also the one who is most likely to get into dangerous situations. There are situations in the book that make you afraid for Ran because of her naivete. Ran’s transformation makes her a girl in a young woman’s body, with all of the potential pitfalls that could encompass. Ran spends some time in the book with an older man named Otaro, who only sees her in her more adult form. It seems like he’s a rich playboy, and he is intrigued by Ran. At a later point in the book he attempts to make a pass at her at a summer festival, which freaks Ran out. She magics herself away from the situation in question before anything happens, but it’s still one of the most anxiety-inducing moments of the book. There’s a lot to unpack in this moment; the way that young girls are sexualized at an early age is a major consideration here, and there’s something to be said about the linkage between what happens in this scene and the male gaze in a misogynistic culture. Ultimately Irie is walking a fine line by emphasizing these seedier aspects of the general culture, and whether or not this line can continue to be walked is an open question. How Irie writes this relationship in further volumes will make or break the series.

There’s also something to be said about the influence that family has on our lives in Ran and the Gray World. Each of the characters’ behaviors are linked to each other in some way; Ran’s desire to be more like her mother stems in part for her desire to be with her mother. Jin’s rejection of his mother and Jin’s magic stems from a feeling of abandonment. How these family interactions will evolve over the course of the series is something I’m interested to explore.

I think the major thematic elements are part of the reason why Ran and the Gray World works, especially in the broader context of Japanese comics. If you read this comic just as a fantasy romp, you might find it not to your liking. But Aki Irie’s work is visually arresting; it demands your attention, and rewards thorough reading. I may have been primed for Ran and the Gray World by Irie’s beautiful art, but it wasn’t a sure bet that I would find it to my liking. Instead I find my expectations have been exceeded. This was a remarkable first volume and a series you should be reading.

Review: Bloom Into You Volumes 1-2 by Nakatani Nio