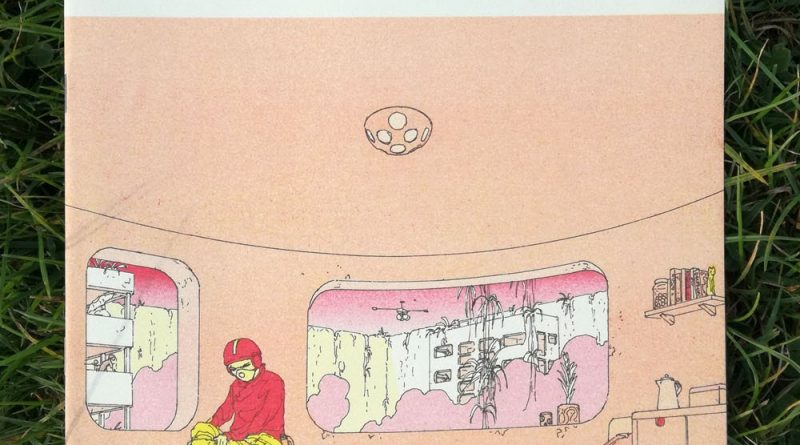 The title is a mouthful, but Propagation and Seed Dispersal of Human/Plant Hybrids on 625B is a reprint of UK-based cartoonist Lando’s 2014 comic of the same name, printed in Mould Map 3. Decadence Comics did a self-contained reprint of that story at the end of 2017, and I recently picked it up from a US-based distributor. Decadence Comics is a well established micropress in the UK run by Lando and Stathis Tsemberlidis (you can see an interview of the two artists in 2014 at The Comics Journal at this link). Lando is a cartoonist primarily known for short science fiction pieces, although at times these comics verge on the science fantastic. Lando is most recently anthologized in Decadence #11 and the Breakdown Press anthology Berserker #1.

In Propagation and Seed Dispersal of Human/Plant Hybrids on 625B two nameless characters flee flying machines that drop some kind of pink liquid on the planet surface. The human/plant hybrids, when trapped in this goo, sprout shoots, leaves, and flowering bodies out of their backs. Importantly, when the human/plants are “propagated,” they are rooted to one spot, their humanity gone, only stalks and leaves remaining.The entire comic is a cat and mouse game between the two protagonists and their pursuers as they attempt to escape the loss of their human forms.

There’s a certain amount of inevitability to Propagation and Seed Dispersal of Human/Plant Hybrids on 625B. The main characters crawl and climb and duck into ruined buildings, but the propagators are ever present. The end of the book is a distant horizon shot;  plants rise from a building, humanity ruined by the bombardment. A massive spaceship hovers in the distance against a backdrop of an unforgiving sunset.

The book itself is 13 pages, and it’s a fragile comic. Propagation and Seed Dispersal of Human/Plant Hybrids on 625B  is printed in red and yellow, using a risograph with thin, delicate paper. I appreciate Lando’s strong sense of composition and thin line. The pages in all of Lando’s work are constructed just so, but there’s this tendency to break out of panel enclosures to make scenes feel more alive. You can see it in the images sampled, where a part of a drone sticks out of its enclosing panel, suggesting a descending movement. You can almost hear the copter blades whine.

It’s not hard to see the metaphor in this comic; the protagonists are pursued by drones that bomb them from the sky. Drone warfare continues to be a scourge of the Middle East, disassociating the nastiness of murder from actual human contact. The United States and its allies like this method of warfare because it’s so impersonal and “precise,” and drones are used to kill people essentially at will and without much warning. Lando’s title for the book, Propagation and Seed Dispersal of Human/Plant Hybrids on 625B, emphasizes the distance between the human/plants and their “propagators.” The description of the book makes the comparison even more crystal clear – “A case study of Seed distribution in a complex and challenging environment.” Those two elements combined are an effective distillation of the current world paradigm; endless, corporate-backed war with no end in sight, enacted by impersonal machines and missile launches, then catalogued and reported upon once the specimen has had time to be cleaned and dried.

It’s hard for me to remember a time when we weren’t at war. 2014, in that respect, is not much different from 2018. As the terms “limited strike” and “crossed a red line” lazily scroll their way across the bottoms of television screens, Propagation and Seed Dispersal of Human/Plant Hybrids on 625B is a not-so-subtle reminder of the times we live in and the human toll of war. As some might say, “Mission accomplished.”