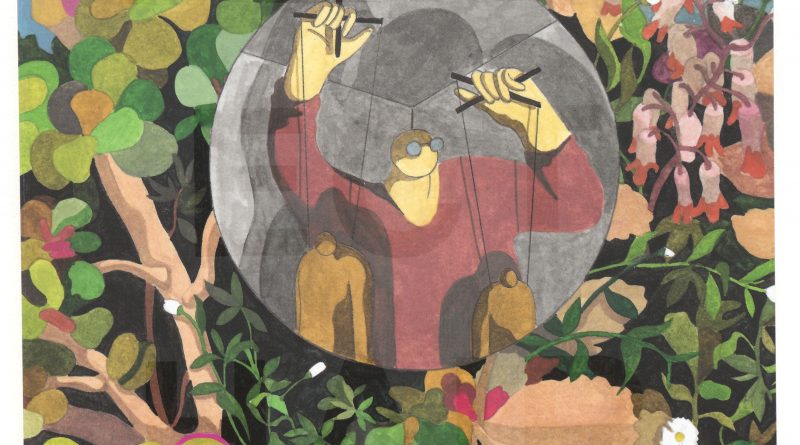 Today I have the pleasure of publishing a review of Tommi Parrish’s Perfect Hair by noted small-press critic and art collector Shawn Starr. Shawn originally brought my attention to Tommi Parrish’s work, so I’m happy to have host some of his writing here on Sequential State. If you are interested in having your writing published on Sequential State, shoot me an email at alex (at) sequentialstate (dot) com. 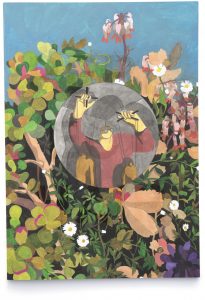 Perfect Hair opens on a mass of bodies contorting on top of each other. Writhing. They begin to form shapes the longer you look at them, letters seem to be springing forth from the page, but the collective body never seems to coalesce. The micro never becomes the macro. ‘Perfect Hair’ is never spelled out, but bodies never move in the ways you want them to, even when the conventions of a title page demand it. 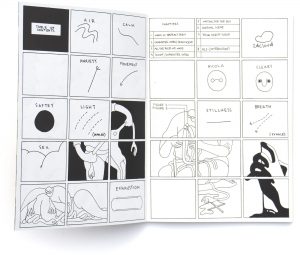 The table of contents, at first glance, is less a map of stories than a guideline for the reader to Parrish’s visual shorthand. Air is denoted as a series of wavy lines, stillness as a flat one and movement by an arced line capped off with an arrow. But as the book goes on it is these small moments of imagined movement, of breathing in and breathing out, that take on a greater role in the works exploration of the body. In this stillness, these shorthands give life to each body that inhabits Parrish’s world. A twisted wrist putting out a cigarette, a quiet exhale before uncontrollable sobbing, an elongated eye roll; these shorthands give the reader a moment of pause to take in the intimate moments the human body goes through before more defined gestures and reactions take place. They display the synapses in the human mind firing before one can recognize their existence. A pause between panels, within a panel. 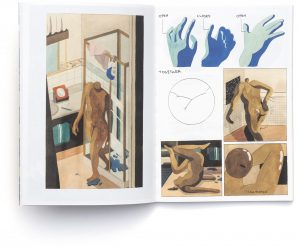 It’s no wonder that Parrish places these panels depicting gestures in the foreground of a figure mishing and mashing two marionettes together. Pulling them apart and putting them back together again. The puppeteer only moves these figures in moments of dramatic action; the quiet asides and subtle movements of daily life are never allowed. When the figures are allowed to exist for moments outside conflict, of sex and exhaustion, they break apart into these less abstract concepts. Symbols and bodies, constantly interchanging.

[This marionette keeps reappearing. At the beginning and end of stories. In the pages, in between them. On the front cover and the back. They keep playing with these bodies, rearranging them, pulling them apart and putting them back together again so that the next story can begin. So that they can readapt their creation to a new situation, and a new idea of what a body can be.]

Parrish’s figures are giants. Their bodies overwhelm the page. Arms and torsos and legs and thighs overtake both panels and page. They absorb colors and radiate them outwards. Perfect Hair, as a title, almost comes off as a kitsch play on words, since the only thing not massive within its pages are Parrish’s figures’ heads. They are shrunken, forcing the reader to live in a world devoid of easy facial features and tics as shorthands into a character mood. Instead it is that shrug, that roll of a finger and wrist that conveys all the strain EC Comics trained us to expect in a figures face.

Quiet moments and even quieter gestures. Perfect Hair lives in these. 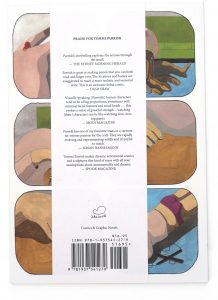 Review: The Amateurs by Conor Stechschulte