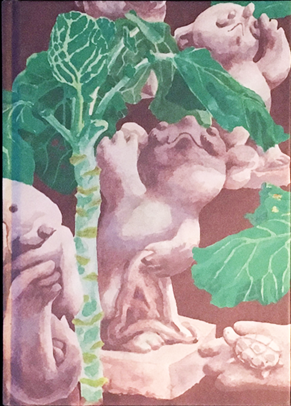 I’m always excited to learn about cartoonists from other parts of the world. Mariana Pita is a cartoonist whose work has slowly started to break through into the English-speaking market. Her comic A Day was originally submitted to the Comics Workbook 2015 competition,and she has a new minicomic coming out this fall from kus. In late 2017, O Panda Gordo and Chilli Com Carne collected a selection of Pita’s zines and short comics into a brand-new hardcover book, Outside With The Cuties.

The book opens with a sweet short story entitled “EDPEOD II” where a young girl escapes school (or daycare) to spend a day trip with an elderly lady (grandma?) without her mother’s knowledge. Pita’s drawing is fascinating, an attractive warbling woolly mess. The grid of “EDPEOD II” seems almost superfluous, but while the drawing of the book is unruly, Pita follows the grid rigorously. The end result is a sweet comic where each drawing is joyful; the whole comic feels spontaneous and alive.

“EDPEOD II” is followed by my two favorite comics in the collection, “A Day” which was previously published by O Panda Gordo as a stand alone book, and “Beach.” In “A Day” we see two young people spend time at the beach before going off to do a job that defies explanation. Both comics are imaginative and wistfully fun, setting the stage for a book that is cute and weird. Both comics are in a cleaner version of Pita’s style, but the color work is gorgeous to look at – in “A Day” specifically, there are some cloud-making scenes (yes, really) that are an absolute joy to look at. Other comics in black and white are cleaner still and not as vibrant, but experiment formally with image texture and tone. While it’s clear that Pita is trying a lot of different things throughout the book, making work that looks radically different at times, I still find that I have a clear sense of Pita’s artistic perspective in Outside With The Cuties.

Rather than a true theme to the collection, my overriding sense of the work is one of spontaneity. The middle part of the book even has a collection of comics titled Improvised Zine 1, 1.5, and 2. While those three comics are clearly called out as improvised, I see a lot of that same “yes, and” mentality in all of Pita’s work. That natural wandering nature of Pita’s work throughout Outside With The Cuties laces it with a kind of workaday mysticism. Everything that happens within the context of each story seems normal, perhaps even reasonable, but her work exudes a sense of mystery and unfamiliarity.

Outside With The Cuties is an odd physical object in the sense that the comics within it have not been completely reformatted to meet a certain size constraint. There are a selection of comics in the middle of the book that are printed at their original size instead of being stretched to fit a larger page size. Consequently, the paper width in the middle of the book is significantly smaller than the stories that surround it. The effect is like finding a zine wedged inside of a larger book, an effect I found charmingly appropriate.

Outside With The Cuties does have some small issues, mostly surrounding the way translations were done for the book. Pita is bilingual, and some of her comics were originally written in English and some written in Portuguese. Instead of translating and re-lettering the book for Portuguese or English, translations are included in after pages or in the panel gutters. This can make the work hard to read at times: I’m reminded of the way that Dark Horse translates sound effects for the manga they publish. Managing this lingual fluidity would be a challenge for any publisher, but I think in this case the translations could have been better executed.

Overall I am enchanted by Mariana Pita and her work. These comics are joyful and strange, like a flower blooming at night. As a work in translation Outside With The Cuties introduces English-speaking readers to a cartoonist whose work feels essential and timely; I recommend this initial collection to you wholeheartedly.