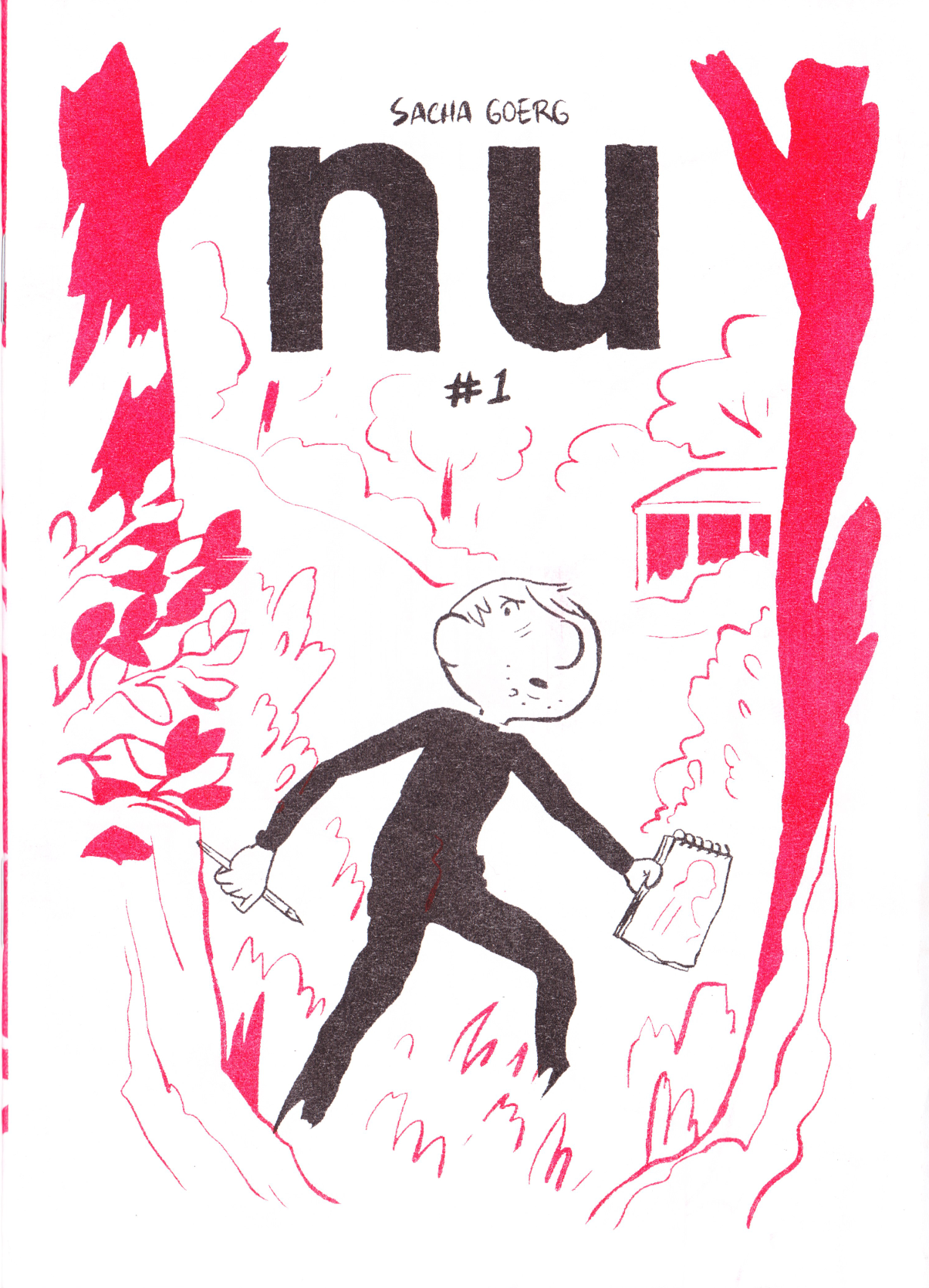 I’m slowly but surely getting caught up on purchases from the past 3 months, and part of the catch up game is digging into snakeoily’s Summer 2014 subscription bundle. This set comes with three 5″X7″ comics, one of which is Nu #1 by Sacha Goerg . The Oily Comics edition has compiled the first three minis into one book, and translated them from French.

Nu #1 is 24 pages of black and white risograph comics with a black and red cover page. It tells the story of a voyeuristic high school student, Jean-Michel, who can’t seem to get his artistic act together in live drawing class at school, but has taken to sneaking onto his crush’s property in order to sketch her while she is swimming. When he gets noticed by her massive dog, he almost gets caught, and his habit starts to spiral out of hand.

Sacha Goerg does a nice job with the linework – it has an organic quality similar to Noah Van Sciver or Inés Estrada, but Goerg is able to find a strength in simpler cartooning than either artist. Some of the strongest pages are Sacha’s portrayal of Jean-Michel’s second visit to his crush’s house where he has to retrieve something lost during his first visit.

Jean-Michel is very two-toned. At school, he plays like a doormouse, very quiet and reserved. But when he gets home and goes out on his stalking adventure, he becomes confident. His posture changes, his demeanor changes. He demands his model do what he want, instead of being harangued. I like this tonal shift, I think it plays well into the rest of the comic.

I also enjoy the stark differences between the scenes where Jean-Michel is out at night – the way Goerg portrays motion and blackness is very appealing, the inks are a lot bolder.

Sacha Goerg is playing with a mirrored narrative, in the sense that Jean-Michel’s activities seem to pique the curiosity of a friend, who ends up stalking him – the stalker being stalked, as it were. We see this reflective quality in the construction of this mini – chapters 1 and 3 focus primarily on the stalking, while chapter 2 focuses more on the interpersonal consequences of Jean-Michel and Lucas’ actions.

One of the features of Nu #1 is a collection of small pieces of pop culture throughout the comic – The pilot of The Wire is playing in one scene, Lucas wears a Zeroes QC t-shirt and listens to Nirvana. Part of me wonders if these pop culture accouterments have a symbolic meaning for the story as a whole – I find it interesting that Lucas is listening to Polly when he gets caught stalking, a song about a girl who gets abducted and tortured after attending a concert. What does the use of Nirvana’s Polly inside the narrative say for Lucas’ fate?

The translation is a little stilted in places, but not enough to turn me off on the comic as a whole – and there are plenty of volumes to go. Sacha Goerg recently published his mini Nu #14 in French.