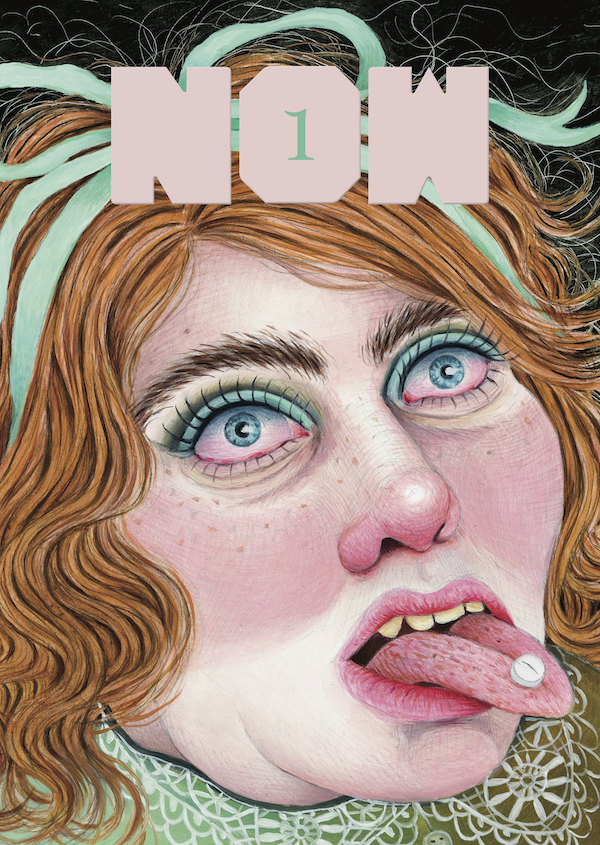 This article was originally published at Your Chicken Enemy.

I’ve been waiting for the release of NOW #1 since it was announced in May. At the closure of Eric Reynold’s last anthology project, MOME, I was still reading manga and whatever shitty graphic novels were thrown my way by well-meaning college buddies. I hadn’t figured out that anthologies existed, that such a concept of comics could exist. A lot of things have changed since then.

Ten years ago, MOME and the Drawn & Quarterly Showcase were both anthologies of note; Kramer’s Ergot was getting weird, and a small art comics publisher 2dcloud was making their entrance to the scene with Good Minnesotan. For a time in the early 10’s, these projects either died or were put on hiatus as resources were allocated towards long-form work. The graphic novel had finally become king. But over the intervening years, comics anthologies have become increasingly ubiquitous and complicated. More cartoonists are being published through the anthology format every year, and more anthologies get printed every year. Still, there hasn’t truly been an alt/art comics anthology of record for a while. Over the past five years, and perhaps a little longer, publishers have built their entire catalogues on anthologies of young cartoonists, but the work has been, at best, a good wank.

That paucity of good alt comics anthologies is starting to change. kuš! soldiers onward with their regularly released themed anthologies. 2dcloud’s Mirror Mirror, first edited by Blaise Larmee and then by Julia Gfrörer & Sean T. Collins, is a standout that plays with the conceptual framework of how a comics anthology looks and acts. But separate and distinct from these, Fantagraphics is starting to release its new anthology, NOW, which is edited by Eric Reynolds. In some ways, compared to kuš! and 2dcloud, NOW #1 plays into more traditional standards. Reynolds, in an interview with Tom Spurgeon, has stated that he “see[s] the function of this anthology as being a [sic] outlet for cartoonists to experiment in a healthy way, and to gain experience in working for print.” Essentially, NOW is intended to be a vehicle for good artists to work small, and quick, in a world of graphic novels.

Published every four months, NOW is designed to be a showcase of short stories by some comics greats and comics up-and-comers, packaged as affordably as possible. You can see that in the production – most anthologies coming out of the Kickstarter scene have spot gloss, foiling, hardcovers, anything to make the book look fancier. NOW seems spartan in comparison. As a print object, NOW #1 looks like it could have come off a magazine rack, and perhaps from a book-seller’s perspective, that’s the target shelving for this thing. The thin cover stock and glossy paper emphasize its existence as a print object designed to get into as many hands as possible.

Reynolds has brought together a strong selection of comics in this first issue of NOW. The book starts with Sara Corbett’s “Constitutional,” a bright, lovely one-pager full of life and air, and is followed shortly by a one-two punch of Eleanor Davis’ “Hurt or Fuck?” and Dash Shaw’s seemingly autobiographical “Scorpio.” In these two comics, NOW reveals in itself a political bent. Reynolds admits that the 2016 US presidential election had an impact on his decision to start making an anthology again, and it’s clear that the politics of that moment had an impact on the comics that made it into this issue. Shaw’s piece, about having a baby the day of the election, is particularly blunt; the stress of the election is part of the cause for inducing the baby’s birth, and the news of Trump’s win is withheld in those precious first moments. Shaw’s character delays the inevitable as long as possible, wanting to give his wife a moment of peace after an intense labor. The angst and anxiety of the current political climate is rife in “Scorpio.” The things you were worried about are coming true.

The ending of NOW #1 is just as solid as the opening – Breakdown Press stalwart Antoine Cossé has a quick but powerful meditation on desire in “Statue”, and Sammy Harkham delivers a one-pager featuring Marlon Brando. Constant collaborators Malachi Ward and Matt Sheean reinvent the space race with “Widening Horizon,” a comic that falls in line with Shaw and Davis. In changing the facts of our interactions with space, “Widening Horizon” challenges the nationalist American exceptionalism, and addresses humanity’s place in the wider universe.

If NOW #1 was just Eric Reynolds anthologizing quality comics, this would be a hard issue to beat. Comics by Tommi Parrish, Daria Tessler, and Conxita Hererro all felt fresh, and while each artist’s comic was stylistically unique, the three pieces individually made for good connective tissue to tie the anthology together. Parrish’s story of trans shoplifters brought the anthology down to earth, while at the same time experimenting with their usual style. Tessler, in contrast, had one of the weirdest comics in NOW #1, and served as a nice rebuttal to the work of Parrish, Shaw, and Van Sciver. Hererro’s comic is unique to the collection in that it is directly referential to older comics work. I found it a great touch that Gabrielle Bell, whose work Hererro referenced, is also anthologized in NOW #1. These are all young cartoonists, and it’s great to see them published alongside some of their more accomplished peers. Parrish and Tessler look to have upcoming books with Fantagraphics, and hopefully Hererro’s Gran bola de helado from apa apa finds an English publisher soon. While I was aware of most of the cartoonists in NOW prior to seeing the author list (and have reviewed quite a few of their comics), there are a few talented cartoonists that are new to me here that I am happy to follow moving forward.

But NOW #1 is not a flawless anthology. Not every comic in the collection was great, or at least a great fit – Tobias Schalken’s “21 Positions / The Final Frontier” was a flat note to an otherwise rock-solid beginning, and Kaela Graham’s “Pretend We’re Orphans,” while a lovely piece, felt out of sync with the rest of the book.

NOW #1 also contains a comic in translation by J.C. Menu, a prolific cartoonist from the French underground who has been scarcely published in English. “S.O.S. Suitcases” is weird and gorgeously inked. The pages feel almost alive, scratchy and visceral. An unnamed character makes a surreal journey in and out of a travelling train, trying to find lost suitcases. His antagonist, a smarmy poseur that turns out to be a Nazi, has speech bubbles that are mostly blood sucking insects, like fleas and gadflies. Although “S.O.S. Suitcases” is one of my favorite comics in the anthology to look at, it didn’t click for me. Call me an idiot, but I didn’t get it.

Despite Reynold’s desire for the comics in NOW to be experimentative, what’s presented is a group of talented, mostly known quantities, doing work that is comfortably within their collective wheelhouses. Gabrielle Bell’s “Dear Naked Guy…” looks and feels like much like her other short anthologized work. Eleanor Davis’ “Hurt or Fuck?” explores human relationships and their brokenness, using imagery that carries forward in graphite the Edenic quality of the illustration of Libby’s Dad. The cartoonist whose work best exemplifies this tendency is Noah Van Sciver, who tops the pile with “Wall of Shame.” “Wall of Shame” is a comic that feels like a distillation of Van Sciver’s recent short fiction. There’s a clear Blammo-style self-prodding combined with the recent autobio bent of his One Dirty Tree project. Van Sciver’s themes, his exploration of broken family relationships, it all feels familiar. These comics aren’t anything new. But, perhaps predictably, the comics I cited above are among my favorite in the anthology. Still, I’m not surprised by this work, and while I’m satisfied, I’m not delighted.

Despite my enjoyment of most of the comics in this book, the disjointedness of my expectations of NOW’s content and what the anthology actually delivers haunted the first issue. Is this just my baggage? It’s hard to say. There’s a sense that Reynolds is knocking the rust off with this one, that the pieces are getting into place, but aren’t aligned yet. Even with its minor failures, NOW #1 is a hell of an anthology. A mix of Fantagraphics mainstays and fresh faces, the resulting work is a compelling collection that seethes. The potential is there. But, the question is, “Is NOW the comics anthology of note?”

The answer is no. Not yet.

If you liked this review, please support the site on Patreon! Your donation keeps the site ad-free and helps support the work I’m doing. Thanks!

One thought on “Review: NOW #1, edited by Eric Reynolds”