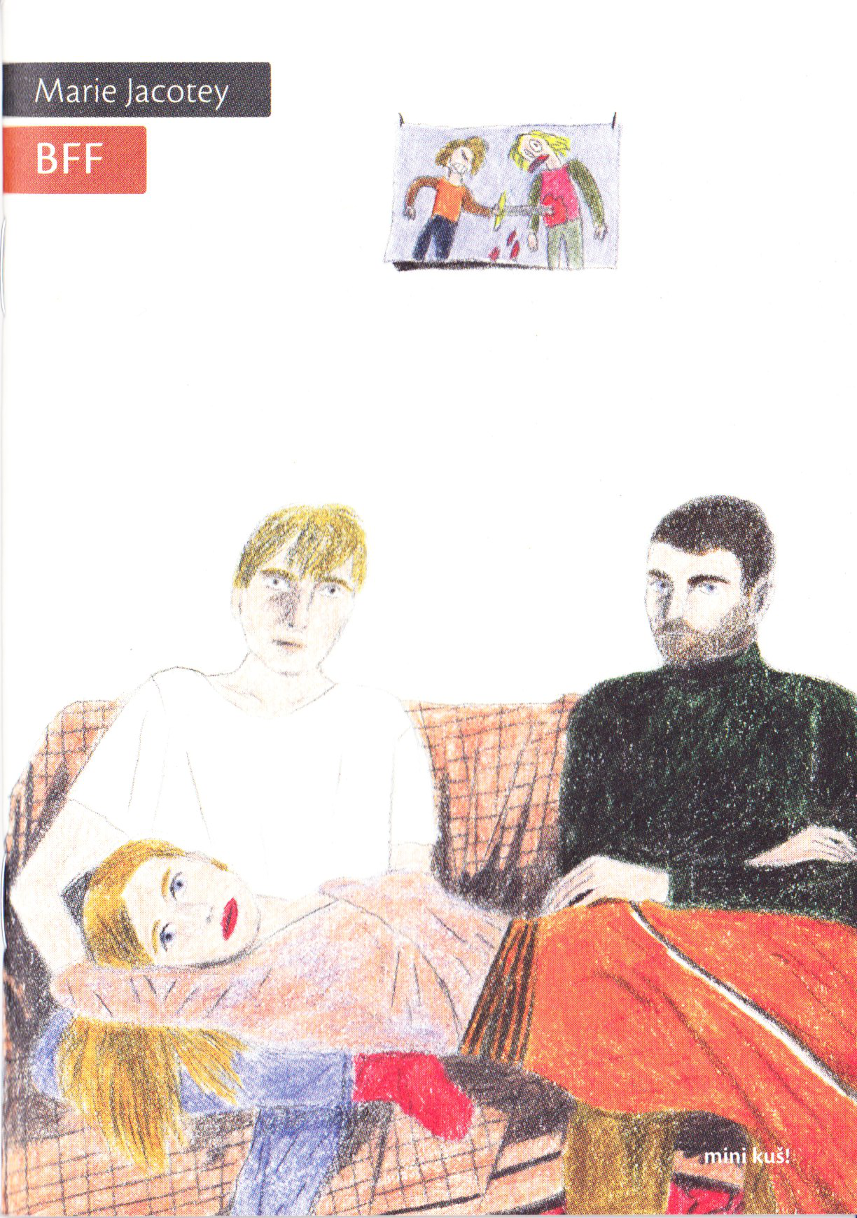 Kuš! komiksi sent over a new set of minis in mid-April, and I’m just now getting around to reading them. I’m running quite a bit behind – I haven’t even gotten to most of my TCAF haul yet. This latest batch has some intriguing work, including BFF by Marie Jacotey. Like all mini kuš, BFF is a 28 pages and in full color. One of the more grounded kuš minis I’ve read, BFF recounts the relationships of three people, Amy, Rob, and Stan. Rob and Amy are recently broken up, and by chance, Amy is now dating Stan, Rob’s best friend; Rob finds out when he visits Stan one early morning.

Marie Jacotey’s illustrations are colored pencil and graphite, smudged and smoky, underlying the book’s sexual frankness. Lust is the driving force behind much of the action of BFF; Rob, having lost Amy’s affections is constantly thinking of her, and Stan is constantly trying to undress her. Almost every conversation is oriented around desire or sexual acts.

The relationships between each of the three characters change dramatically over 28 pages and are the source of all of the movement in BFF, although any conflict is reflected more in Rob’s internal monologue than in physical action. It’s important that most of the book happens in Rob’s head. He’s constantly on the verge of either triumph or existential crisis, and there doesn’t seem to be much in the way of middle ground.

Marie Jacotey focuses on the juxtaposition between the way Rob treats Stan in the  and how he actually feels. By the end of the book, Rob has done something that would likely be ruinous for his friendship with Stan if Stan ever found out. And given how close the two seem, Stan finding out is rather likely. The comic does seem violent, at least in an emotional way. A painting of one man stabbing another in the chest hangs in Rob’s room – it’s a bit on the nose.

The presentation of all of this is very matter-of-fact. Jacotey seems to be saying, “Look how fucked up people can be!” presenting the whole of BFF with a wry smile. With the backstabbing, lying, callousness, and ruined friendships, BFF hits that mark well enough.