I’m still working through Kuš! komiksi’s latest batch of
minis, and one I’ve been mulling over recently is a comic by Finish cartoonist
and illustrator Amanda Vähämäki. North American readers will recognize Vähämäki
from The Bun Field, an 80 page comic
published by Drawn & Quarterly in 2009.

Featuring
a small group of characters from an unnamed town in Finland, we see these folks
go about their day to day lives – cleaning up dropped apples, working on an art
project, driving the kids to a horse riding extracurricular, these small
snippets of action portray town life in a charming way.

There’s
not much in the way of major conflict in this comic; no single character is
followed long enough to find a narrative arc so progressed. But that freedom
from conflict gives It’s Tuesday a
chance to let us rest in the everydayness of it all (the title of the comic is a little odd, but apt given the contents of the book). Vähämäki seems to
relish in the moments of character introspection, or an interaction where a facial
expression gives away their internal thoughts.

Vähämäki’s
colors are bright and cheerful, and small touches like sweater patterns over
top of scratchy pencil work make it seem all the more grounded, with backgrounds
almost seem drawn from life. A single scene implies some potentially troubling
activities in the town recently, but it is more background noise for a mother
being amused by her daughter & friend’s antics.

I’ve
professed my love of slice of life comics in the past, and It’s Tuesday falls squarely in that category.  I’ve had a little trouble finding more information
about Vähämäki’s work, which is a shame, because if this mini is
representative of Vähämäki’s oeuvre, then I’m missing out on some very
enjoyable comics. As it stands, It’s
Tuesday hits all the right notes for me in its meandering, lovely way. Mundanity at its finest.

Amanda
Vähämäki is a cartoonist and illustrator from Finland whose work has
been included in European comics anthologies such as Canicola and Orang. Vähämäki is a part of the Finish comic art studio and
association KUTIKUTI.

Kuš! komiksi [tumblr: kushkomikss ]  is a Latvian comics publisher
that in addition to its kuš and mini kuš comics has a goal to promote and
develop comics culture in Latvia and feature Latvian cartoonists. You can see
more of their books and buy a half-year subscription to their titles at their
website. 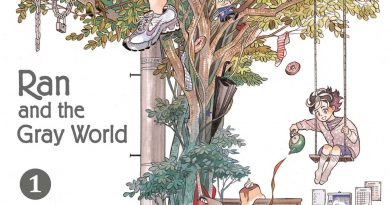