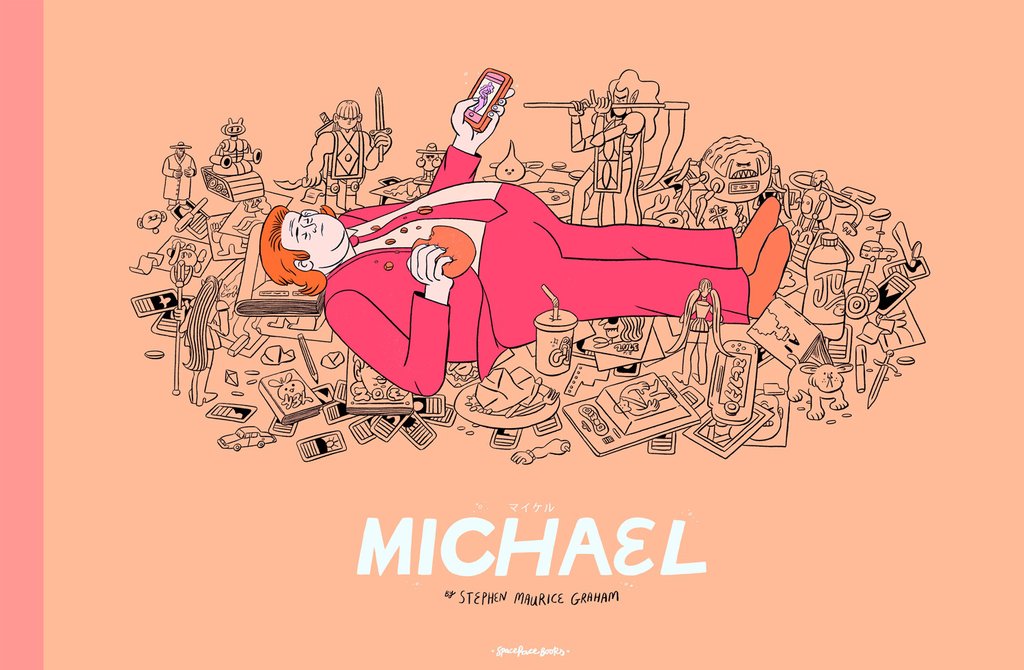 Space Face Books was fairly quiet in 2016, but one of its few releases last year was a collection of Stephen Maurice Graham’s Michael comics, originally published online at Vice.com. It’s clear that the folks at Space Face and Graham put some thought into the design of the book – Michael is a 56-page full color paperback in a letterbox aspect, with a matte cover with glossy raised black ink, either by UV or thermography. The book’s format means that the comics had to be rearranged from their original printing to fit the page orientation, and the raised print gives the book a tactile element. It’s a nice print object, and in a sea of shoddily-printed paperbacks, I appreciated getting my hands on Michael.

Michael, the title character, is a man-child racing fast towards a dead end. Surrounded by toys and video games, Michael would prefer to live in a dream world than in reality. The collection shows us a year in the life of MIchael, playing games, avoiding social interaction, picking zits, and generally being a layabout. He lies to his mother about being socially engaged or cleaning up his apartment, gets picked on at work, all the while escaping into various dreamlands and fantasies.

Graham’s cartooning has a real energy to it, complemented by vivid color palettes. The colors of Michael are often the brightest and oddest when Michael is off in his own fantasy world, emphasizing the weirdness of the reality Michael tries to construct for himself. These fantasy worlds are juxtaposed with the utter mundanity of Michael’s existence. In some ways I’m reminded of Clowes’ recent comics, but I think Graham’s work plays to a different tune. In Clowes’ work, there are generally disparities between how the main character sees himself and who he truly is. It’s clear that despite the fantasies and daydreaming, Michael, at least at some level, understands his awkwardness and his social ineptitude. It’s also clear that Graham is figuring things out on the fly – the further you progress through the book, the better the cartooning gets.

It’s easy to look at Micheal and see someone you know. And it’s easy to see Michael’s escapism as a release valve, symbolic of the ways millennials interact with popular culture in the ‘10s. But I think that even while Graham is poking fun at “geek culture,” there’s a level of understanding, an attention to detail in Michael that shows Graham’s love for that culture.

There are some things that do detract from the overall experience – like daily or weekly newspaper comics, the strips in Micheal are focused on the punchline. Being a collection of weekly strips means that the work is often in service to a punchline instead of developing Michael in a fuller way. That said, in Michael, Graham has created a new everyman in the alt-comics tradition. Michael is a hard character to root for, but he’s a character that keenly epitomizes the malaise of the millennial generation, their lack of economic prospects, their growing certainty that the world is pitched against them. And their obsession with Final Fantasy 7.

Sequential State continues to be an ad-free website because of the support of readers. If you like what we’re doing here, and want to see it continue, we’d appreciate your support on Patreon. Thanks! 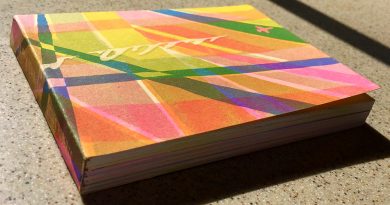