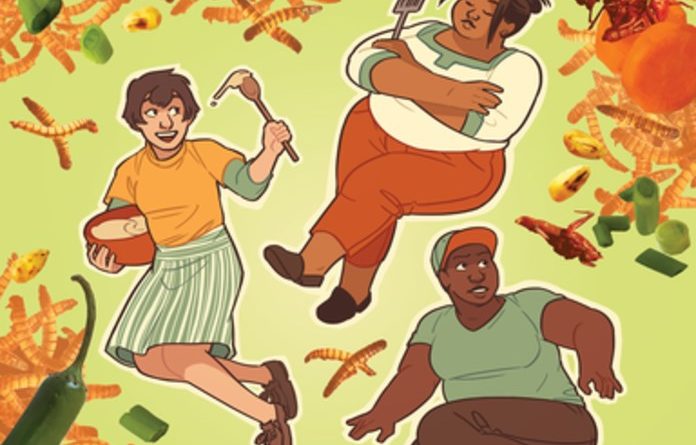 If recent studies are to be believed, the world is consuming way more meat than it can handle long-term; the production of meat for food is the source of at least 8% of the total greenhouse gas emissions across the world, and the production of meat, especially beef, is inefficient at best. A discussion that’s been cropping up in more and more mainstream places is whether or not insect-based protein is the way of the future. This makes Meal, a new comic from Blue Delliquanti (of O Human Star fame) and co-author Soleil Ho, a timely entry into the wider cultural context. Meal is a slice-of-life comic about a young chef named Yarrow who evangelizes about insect-based foods, and her experience finding a job (and romance) at a new restaurant in Lyndale, Minnesota.

It’s clear, first and foremost, that Meal is inspired by Japanese cooking manga. Centered around cooking (be it bugs or otherwise), there’s an attention to detail when it comes to the mundanity of food preparation, the chopping, slicing, and grinding that differentiate good food from great food. Co-author Soleil Ho likely brings a lot of this attention to detail as a chef and media-savy creator. Delliquanti specifically mentions a comic focused on wine (Drops of God, published by Vertical Inc. in the United States) in the afterword, but it’s easy to see comics like Kitchen Princess or What Did You Eat Yesterday? as foundational texts for Meal. All of these comics use cooking as a vehicle to express something, whether that is care, love, expertise, or joy. In Meal, Delliquanti and Ho are trying to tell a story not just about the current methods of cultivation of insects as livestock, but a story of human history, and current human diets that are ignored by the West.

Embedded within the cooking drama is a romance between Yarrow, the bug evangelist, and Milani, a painter with some self-sabotaging tendencies. Just as Meal is about discovering a type of cuisine that is new to a lot of Western eaters, the comic is also about discovering yourself in a new place. This is where Delliquanti’s experience from O Human Star shines brightest, and is one of the best parts of the comic. Along with the romance between these two women, what I think defines Meal the most is the stories of its characters, about why they are cooking with insects. These stories are widely different, from different cultures and backgrounds, but remind me as a critic and reader of the universality of the act of care that is cooking. They are also all remarkably outside of my lived experience (and likely most Western peoples’ experience). I think that adds a lot to the value of the work as both a comic and as an introduction to the concept of entomophagy.

Meal isn’t a perfect homerun, however; the comic starts in media res and rushes into a breathless lecture about the joy of cooking with bugs. The resulting rush of information is heavy handed, making the comic initially seem more like a polemic than an actual story. That rush of an opening cleans up nicely in the first 20 pages or so, but it initially left me wanting to leave the book alone. Because Meal is specifically about eating bugs and not, for example, any other type of cooking, it also has the tendency to be a bit didactic. While I found that tendency mostly helpful (since I know very little about eating bugs), it did dry out some of the comic.

Overall Meal is a remarkably self-assured book about a type of eating that may become more and more common in the coming decades. As a slice-of-life romance, Meal has additional charm. Taken together, Meal feels a lot like comfort food; warm, inviting, and comfortable. Even for the most insect-averse, I think it’s worth a try – even though your mac & cheese is going to have crickets in it.