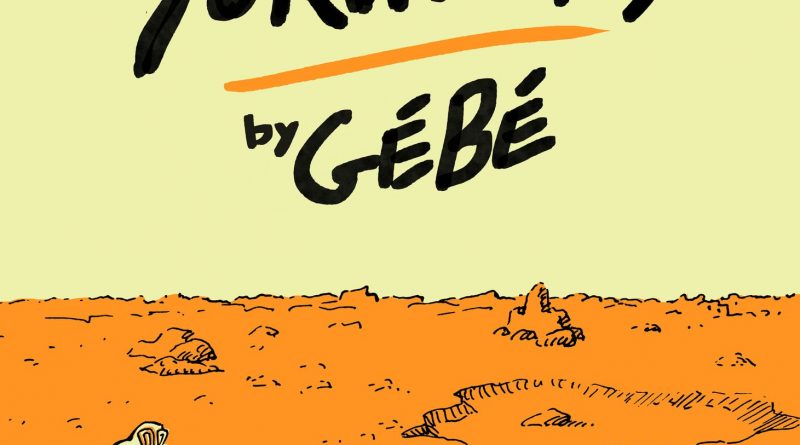 Given recent political maneuverings and dire climate catastrophe, it feels like the dim haze of the apocalypse is just around the corner. GÉBÉ’s 1982 comic Lettre aux survivants has been recently translated and published in English as Letter to Survivors by New York Review Comics, and this book was originally published at a time when the apocalypse also seemed imminent. The link between that time and now feels stronger now than ever, and in some ways Letter to Survivors feels prescient today.

GÉBÉ’s slim satire features a gas mask-wearing mail carrier who rides a bike around a bombed-out wasteland delivering letters to families living in bunkers. Without the ability to physically give the mail to its recipients, the mail carrier is forced to read the letters to the bunker’s air port. The family is likewise obliged to listen, because plugging the port means suffocating on dank cellar air.

GÉBÉ’s cartooning is characterized by a stylized, powerful line; the drawing is spare but accomplished. There is very little in the way of shading or fills – any dark space on the page is created using repeated parallel lines. The effect draws your attention to the characters in the foreground, keeps your eye centered on the characters on the page.These are attractive comics. I was particularly taken with the way GÉBÉ draws faces. There’s a specific scene where the unnamed mother and wife of the bunker family pours out wine that feels horrible and claustrophobic, almost maddening. As the book continues, the characters become more and more haggard. Little details like these are an essential part of Letter to Survivors and much of the reason why it works.

GÉBÉ’s mail carrier tells a selection of tales, starting with the most immediate present and slowly working backwards in time until the tales told are closer to fables than histories. Each of the letters gives the family something to mourn; the dog they abandoned to the bombs, an idyllic life in the country, a less complicated past. The further you read, the more GÉBÉ’s point becomes clear. The nostalgia GÉBÉ’s characters feel for the past is a poison, and intoxicant that let them get to this place. GÉBÉ indicates that the characters hiding amongst the ruins purchased their current predicament by both being emotionally moored in the past and by spending time on the purchases of the future.

GÉBÉ also speaks to the need for storytellers to tell stories that will lead to societal change. The mail carrier turns out to not be the only person out on a bike, and while I won’t spoil the ending, it’s clear that the work of the mail carrier isn’t just carrying missives from one bunker to the next. “Pictures are useful,” GÉBÉ says in a short interlude, and that small statement is easily overlooked. But that interlude is a call out to other artists, writers, musicians, a call to break through the societal norms and be the smelling salts that wakes a comatose public.
Letter to Survivors is a science fiction story on the surface, but GÉBÉ doesn’t tell you how the bombs went off, who was first, how it all happened – that doesn’t matter. What matters is the human effect of the apocalypse, and that’s the heart of the book. Letter to Survivors is strongly anticaptialist and unsentimental, mean but aware. Letter to Survivors is a necessary work during a time where the world stands on the cliff’s edge.