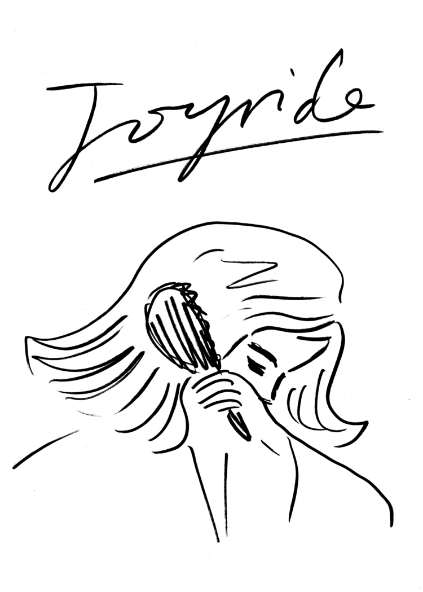 There’s been an upswing in what I might call “lo-fi comics”that I’ve noticed recently on tumblr and instagram, and Joyride, Zoë Taylor’s latest major book from Breakdown Press, seems to epitomize that movement. Taylor had a selection in the comics anthology DÔME printed by Breakdown Press and Lagon Revue at Angouleme last year, but Taylor is more widely known as an illustrator whose work has appeared in the 2015 Marc by Marc Jacobs Resort line.

Joyride features an unnamed cast of characters at a party at a mansion. The main character, a woman in disguise, attends the party, but an observant guest recognizes her through the disguise. Shortly thereafter, she hotwires a car and takes it out for a joyride. I won’t spoil the ending, but what’s clear throughout the comic is an unspoken backstory. Why is the main character in disguise, and why has she decided to attend this party? Was it to see a man we watch her tail in the mansion? There are a lot of questions to ask and little by way of answers.

Taylor’s line is quick and vibrant. It seems like each image in Joyride was constructed as quickly as possible, like a one- or five-minute sketch at a live drawing class. These images look like something quickly scrawled onto a whiteboard with an erasable marker, and it wouldn’t surprise me to find out that Taylor’s tool of choice for this book was a Sharpie marker. There is also sometimes a distortion of the line, as though there was a bleed or a bad scan from the original art. Because images look so thrown together, the reader’s focus drifts towards the places where Taylor has spent the most time. This is often the main character’s eyes, with thick eyelashes rendered while the character’s hands are a quick set of lines. That said, these are the one- or five-minute sketches of an artist who was studied their craft. Each mark, despite its looseness, feels essential. There’s no wasted space, no unneeded effort. The effect of these formal choices changes the way you perceive each page, and encourages you as the reader to move as quickly as you can. Zoom through each page, soak up the emotion, and
let the work take you where it wants you to go.

Joyride is a relatively “quiet” comic -there are less than 15 words in the entire 104 pages, so Taylor relies on the reader’s visual comprehension. Taylor’s pages are unique in that most are drawn on a half-page, with the remaining lower half of the page left blank. In important shots and in two-page spreads, Taylor blows up the image, taking up the entire page. This formal technique gives a very subtle comic some flash – we know exactly which scenes are the linchpins to Taylor’s story.

My reading of Joyride isn’t one that I would call conclusive – certainly I found the reading experience exhilarating and unique compared to other work, but I am still examining my reaction to the work, many days later. If anything presents itself fully in Joyride, it’s the raw emotion of the work, the joy, sadness, and regret of the characters. And perhaps that’s the point – Joyride is a comic that, through its hurried illustration and lack of definition, brings its emotional heft to a fine point.

Sequential State is generously supported by readers on Patreon. If this reading experience was worth a dollar to you, I’m asking for your support. Help me create a better alt-comics critical environment, and make your opinion known!