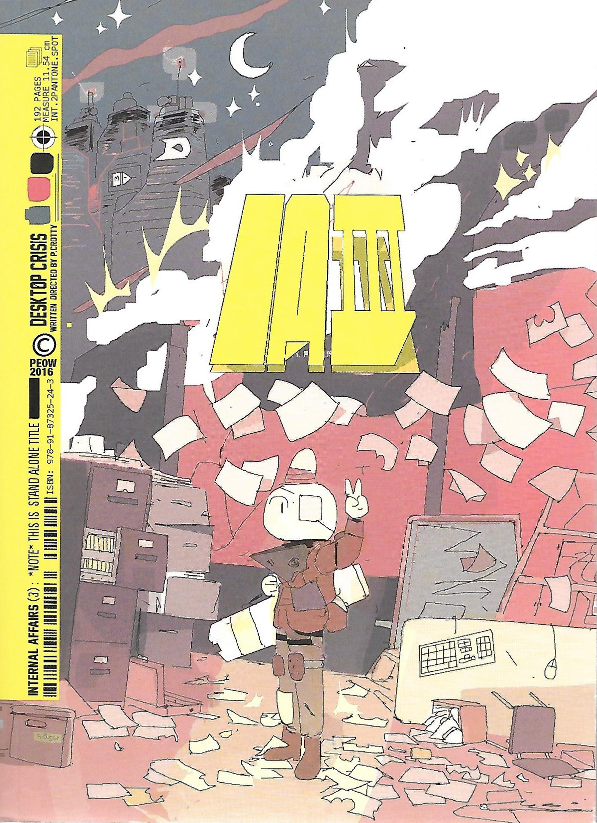 Another of PEOW! Studio’s Kickstarter comics, Patrick Crotty’s Internal Affairs III is a continuation of previous Internal Affairs comics published by PEOW!, but stands alone as a 192-page graphic novel. In it, the main character, Onion, is an unpaid intern at Banervelt AMCS, a major corp that uses mechs to deliver services to clients. When the whole company goes on a retreat, leaving the unpaid intern team to guard the building, a big job comes up, and it’s up to Onion to be a Hero and save the day!

Internal Affairs III owes a lot to side-scroller video games like Gunstar Heroes and Metal Slug, as well as popular mech anime and manga like Gundam. The comic uses video game tropes to varying success, like loading/title screens at the beginning of the book, mid-level inventory refills, and NPCs holding access cards that allow you to advance to the next level.  There’s some formal inventiveness here that is interesting, but the co-mingling of various digital media in a comic book has been done before.

One of the unique “features” of Internal Affairs III is its dialogue, which reads a lot more like texting or instant message than traditional comics (e.g. PLZ!, G2G, lol). At first the dialogue feels low effort, but on a closer read its effect is that it dampens the relative severity of the action and makes it a little easier to handle. Generally, Crotty is trying to make an action-adventure-comedy, and the dialogue is a part of that. The book is funny, has one of the most absurd spit-takes ever, and Crotty even manages to slip in a Lil Jon & The East Side Boyz reference, which is… something.

Internal Affairs III has a sketchy, pixelated style that emulates 16-bit video games. In the end matter, Crotty explains that the entire book was created using a 2×2 pixel cursor on the computer, which makes sense given the thickness of the line throughout. Despite the sloppiness of the art, Crotty’s action scenes are the easiest parts of the book to read. Crotty shifts from a talking heads no-panel style in low-action moments to a very structured paneling style during action shots, so it’s easier to figure out what’s going where.

I reviewed another PEOW! book last week, but it bears repeating that the production values on these things are high. The book has spot gloss on the front and the insides are printed on a soft cream-colored paper. Crotty uses a red and navy ink throughout in various gradients to generate a range of colors, and the color palette seems suited for the paper stock.

Internal Affairs III is an odd book. If you like the kind of self-depreciating meta-humor that Crotty is going for, or if you like the influences that it so clearly draws on, you’ll probably like it. There isn’t a good way to describe my experience with the book; for me, this was one of those reads that you kind of hate until half-way through, when you realize how good it is. That’s a mixed message, so, here it is a little clearer; Internal Affairs III is a unique comic that ties fan culture together in a way that I’ve not seen so fully realized before in comics, and it does it in a way that is both modern and self-aware. It’s funny and weird, in the best ways. I hated it a little, and loved it a little, and I’d recommend you read it.

Patrick Crotty is a publisher and cartoonist based in New York and Stockholm. You can get a copy of Internal Affairs III at CAB @comicartsbrooklyn this weekend.

PEOW! Studio @peowstudio is a publisher of comics based in Stockholm, Sweden. Their latest offerings can be purchased from their website or from their USA distributor, Retrofit Comics (tumblr: @retrofitcomics). 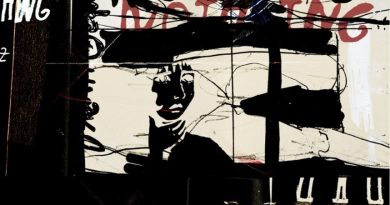