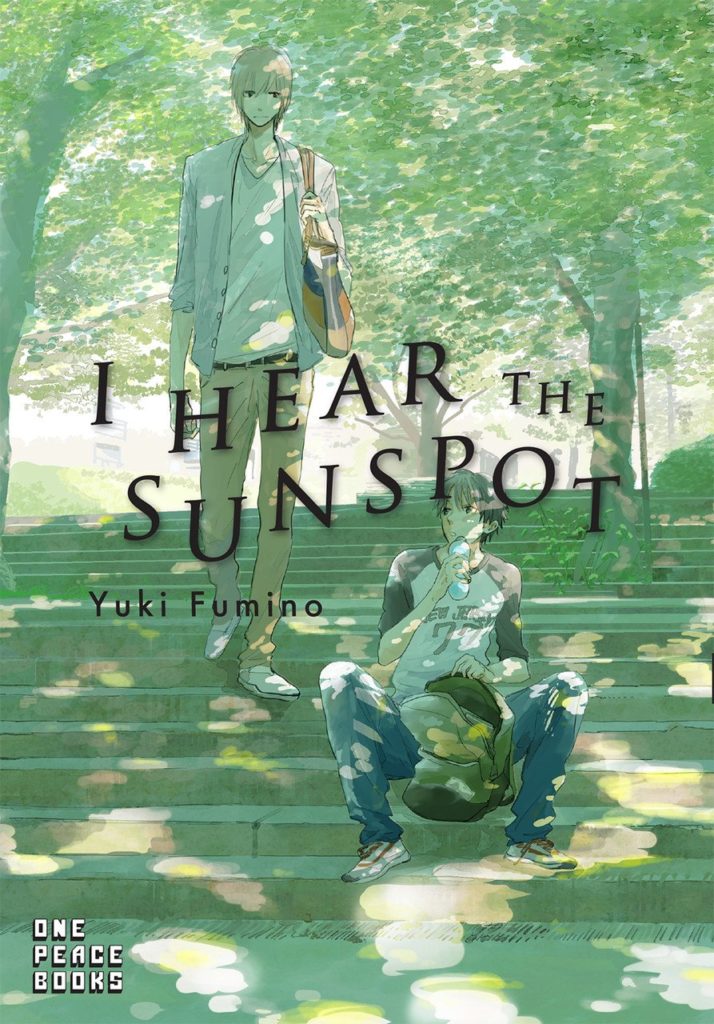 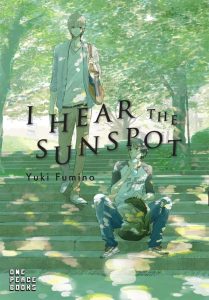 One Peace Books occasionally sends me a review copy of new comics they have recently released, and one of their latest is I Hear The Sunspot, a comic about two young men, one with a hearing disability, and the other, a brash interloper who agrees to take notes for this classmate in college in exchange for a boxed lunch. Kohei is legally deaf, although he can hear somewhat with a hearing aid and reads lips, but his disability has kept him separated from other people. When he has a hard time understanding, many people brush him off. On the other side of the spectrum, he’s seen as a disabled other, not fully human; something to hang a fantasy on or use in a self-congratulatory show of compassion. His note-taker, the ravenous and brash Taichi, intervenes on his withdrawn life, confronting Kohei’s disability with a blunt kindness and willfulness that Kohei reacts strongly to.

I Hear The Sunspot is serialized in Canna, a traditional yaoi (boys love) magazine, but the story is not traditional BL, in the sense that it’s extremely chaste, and more about the emotional development of the two leading men. There’s a single kiss, near the end of the book, but not much else.  I don’t have a great grasp on this, but it seems like LGBTQ comics have a hard time finding a home in Japanese comics mags. There are the yuri and yaoi traditions, and anything that exists outside of those formulas is an odd duckling.

Fumino’s art is a lot less polished than most manga that gets published in English – the lines aren’t as clean, the style is scratchy. There are some drafting issues here and there. This seems to change slowly over the course of the book – I Hear The Sunspot is a debut work, and those changes in style and craft are often apparent as a graphic novel progresses. Regardless, Fumino has a clear eye for human interaction and complicated emoting. Her faces and expressions capture the sublimated grief of Kohei, his complicated and growing feelings for Taichi, and on the opposite end of the spectrum, Taichi’s anger and protectiveness, his guilelessness.

Thematically, I Hear The Sunspot emphasizes the human relationship between Kohei and Taichi. In a world where Kohei is constantly othered by people who only seem him as disabled, the power of Taichi’s relationship is staggering. The societal impact of disability, the expectations of those without disability, and the way disability convolutes human relationships – I Hear The Sunspot deals with these things in a sensitive, intelligent way. But, importantly, Fumino’s debut is also a potent character study and a powerful meditation on caring, attraction, intimacy, and relational change.

Sequential State is supported by readers like you on Patreon. Please give the site a hand, would you? Your support means more writing and a better reading experience.

One thought on “Review: I Hear the Sunspot by Yuki Fumino”