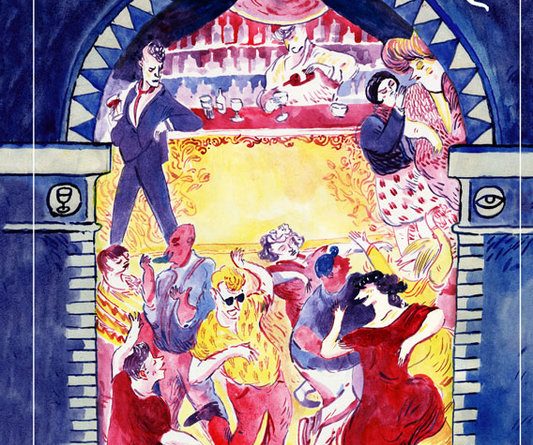 I’m still working through some older books I’ve been meaning to review; hope you have enjoyed the last few days worth of reviews. I’ll take a moment of privilege today and direct you over to Your Chicken Enemy, a site run by my colleague and friend Daniel Elkin. Dan is running a week-long feature called Books I Liked in 2018, a “Best Of” list that acknowledges the flawed concept of “Best Of” lists but still gives writers a chance to brag on books they liked this year. Dan has assembled a team of critics to write for the site, including yours truly; I’ll have my three picks on Sequential State later this week, but go check out his site and tell him I sent you.

James Albon is a celebrated illustrator from Scotland, but Her Bark & Her Bite is his first graphic novella. I picked up a copy at my local library after seeing some images of the book on Top Shelf’s website, and the book has stayed in my mind well past its due date. Published in April 2017, Her Bark & Her Bite is about a young painter named Rebecca who moves to the city to live with a cousin, and starts seeing a young socialite named Victor around town. The two pair up after a few chance meetings at various art-adjacent parties and shows, but their budding romance is cast askance when Victor gets a pug for his birthday. The pug is named Princess, and she becomes an object of jealousy and hatred as Rebecca starts to see her relationship with Victor fall apart while he lavishes attention on an ugly dog.

Rebecca’s story is really one of self-acceptance, and her relationship with Victor quickly becomes toxic after a fast-paced beginning. Rebecca comes from a rural background and moves to the city to pursue her career in painting. That gets pushed to the side as she gets drawn towards Victor. The raucous partying and drinking that both characters engage in during the beginning of the relationship starts falls away into bickering and resentment. Victor is nothing if not confident in himself, but he can’t concentrate on any one thing; his relationship with Rebecca is a fling, much like his obsession with writing poetry after they’ve been dating for a while. He’s into the new thing, the shiny object. He can’t really love Rebecca, because he can’t even pay attention to her.

The most remarkable feature of Her Bark & Her Bite is Albon’s expressive colored pencil work. The images lift off the page, practically dancing in your line of sight. Many of the page spreads were breathtaking, and the whole book exudes a confident slinkiness. Albon’s color choices feel fresh, contrasting cool blues and deep purples with yellows and small touches of red. These warmer accents are like fireflies in a night sky, glowing, demanding your attention. As a whole, the illustration is messy in the best possible ways. Its ticks and scratches lead to a visual sensation that feels like breathing. If Her Bark & Her Bite is a dance, it swings.

Less satisfyingly, Albon’s writing swings wildly throughout the book; at points his characters are almost caricatures of themselves, while in other, quieter moments, the dialogue has a naturalistic feel. The antagonistic relationship between Rebecca and one of Victor’s hangers-on steers most of the drama in the third act of the book, but that drama climaxes in a very strange way, telegraphed early on in the book. Albon takes a lot of liberties in that last third of the book, most of which (but not all) can be forgiven by his beautiful drawing.

As a debut, I found a lot to love about Her Bark & Her Bite. It’s not a perfect work, but it doesn’t have to be; it’s fun and it’s funny, and it has a few twists. If Albon can advance his writing skills to the level of his drawing, he will be a force to be reckoned with.