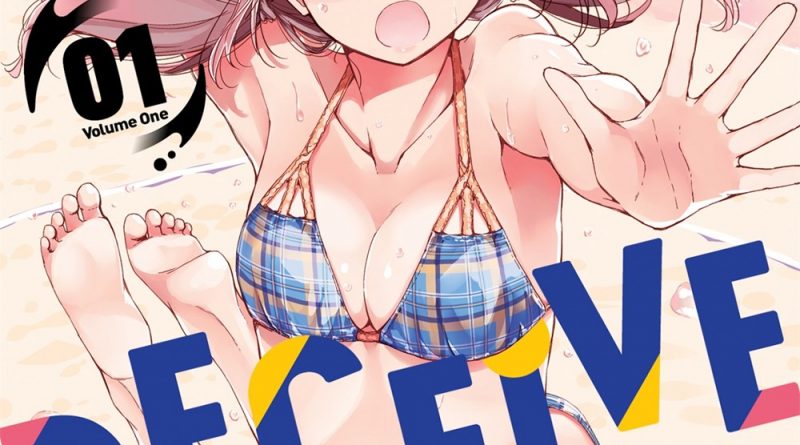 A few months ago, I stumbled across the Otaku USA review of Harukana Receive, a new-ish sports manga from Seven Seas. The comic attracted some early attention and garnered a 12-episode anime adaptation in 2018. Six volumes are currently on the Seven Seas publishing schedule through 2020, and the fourth volume was just released last week. Jason Bradley Thompson’s opening salvo in the December edition of Otaku USA claims that the book “looks like something you want to hide from your parents, but don’t be deceived… Harukana Receive is about sports, not fanservice.”

Now, I can use my own two eyes to evaluate a comic book cover, and what I saw didn’t necessarily line up with Jason’s assertion. Curious, I picked up the first three volumes from the library, and read them. And, having put myself in a position where I put stock in other critics’ writing, I must be perfectly honest: Jason’s leading assessment is the most disingenuous evaluation of the series that I think could possibly be mustered.

I’ve been sitting on these feelings for a while now, and I’m generally not interested in calling out another critic, but I’m cleaning up my “partial reviews” folder this week, and I did promise the internet that I would write this review… so it’s time to get down to business.

Harukana Receive revolves around Haruka Ozora and her cousin, Kanata. Haruka is tall compared to most Japanese girls, and has trouble finding cute clothes due to her size. She doesn’t fit in with the regular crowd, and so when she arrives to stay with her grandmother in Okinawa, she gets a chance to start fresh. She’s immediately pulled in by an ongoing game of beach volleyball, and sees an opportunity to redefine herself. Curiously, her cousin Kanata is a previous beach volleyball player, and in a naive way, Haruka dives into the sport. Seeking training and companionship from other local players, she finds a community she can call her own, and builds new friendships along the way.

Nyoijizai’s illustration is competent but not that exciting. One of the defining features of the comic is that the characters are supposed to be tall, but the proportions are a little weird; in most scenes, the main characters end up looking like they’ve been recently removed from a taffy puller. Nyoijizai tends to waffle between very simple page composition and more dynamic character popouts. Harukana Receive does make the action of a sand volleyball game move smoothly, and smart panelling keeps the tension up throughout most matches. But as soon as a game is over, the speed regresses to a more quiet, less interesting pace.

As with most sports manga, Harukana Receive gets a little didactic. Through Haruka’s lessons from other players, readers learn the rules of the game, terms used by players, and various strategies. Beach volleyball, played with two players, eschews some of the classic stereotypes of volleyball like the “ace,” and specialized positions like the libero are meaningless on small teams. Harukana Receive helpfully explains that good partnership and communication is key to winning beach volleyball. This helpfulness is complemented by plenty of butt-slapping and other “sportsy” antics.

In terms of storytelling, Harukana Receive is a sort of middle of the road comic. There’s the athletic progression of a lead character that drives the storytelling, plus the built-in conflict of matches against other teams. I’ve long believed that sports manga have the easiest kind of setups available to writers, because the natural tendency of sport is conflict. And it’s clear that while Harukana Receive does that sports stuff efficiently, it’s not particularly inspired. The series does slide in some interpersonal drama in the second and third volumes, giving some backstory on Kanata and her previous beach volleyball partner. This drama makes the comic a little more interesting, but it’s essentially set dressing.

Harukana Receive runs in Manga Time Kirara Forward (まんがタイムきららフォワード), a manga anthology published by Houbunsha for adult men. The intended audience for the comic tells you plenty about what to expect from Harukana Receive, if my review hasn’t clued you in thus far. The series is chock-full of all the traditional culprits of fanservice in manga, all generally under the guise of sets, spikes, serves, and receives. There’s also the need to pick out team swimsuits, Haruka’s ogling of other girls and their cup sizes, canoodling, and other “innocent but suggestive” activity that these comics are known for. All things being equal, this is mostly the point of Harukana Receive. The comic is designed so that readers spend as much time as possible looking at highschool girls in bathing suits. And honestly, I should have known better than to expect Harukana Receive would be anything but this. Fans of volleyball may find something of interest here, but let’s be real; the cover images tell you everything you need to know.