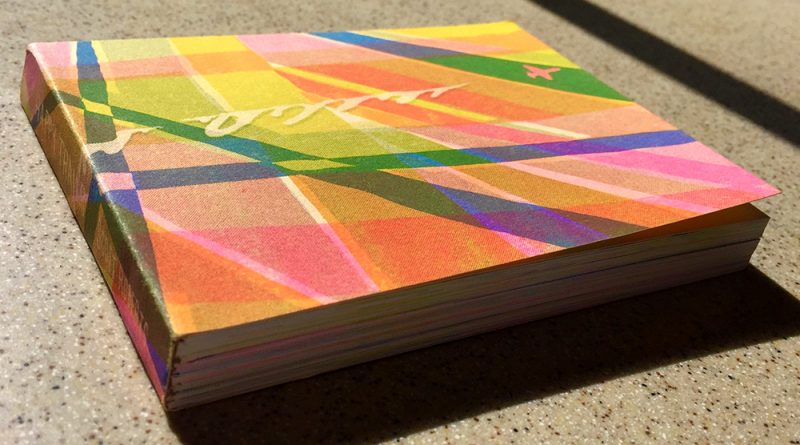 Scott was kind enough to send over a copy of his latest comic, Happy Trails, before SPX this year. Roberts is a constant formal experimenter, and Happy Trails, which is a 112 page risographed book, is both a comic, and a two-way flip book. Happy Trails is also probably the most frightening comic I’ve read all year.

I pulled the video from Robert’s website to show you how the book works, because there’s not a great way to show you in a conventional way –
the risoprint Fluorescent Pink doesn’t capture well on traditional scanner
beds, and you wouldn’t get the full experience of how the flip book works. As flip books go, this one is a bit bigger than your standard, clocking in at 5” x 3.75”. It’s not a traditional flip book in that the “narrative” of flip books is usually explained through the flip, a silent piece of animation for the reader, whereas in Happy Trails the animation is more abstract. People and clouds move and shift, but it’s not exactly clear what’s going on unless you read the comic. Happy Trails is a two-sided flip book, but the front-to-back flip works better than the back-to-front.

In Happy Trails, Roberts tells the story of three scientist/think tank employees on a walking meeting. The goal of the meeting – “to make life better for the people!” Members bring up weather manipulation, dispersal of a mood-altering compound into the jet stream, with all the parts and pieces ready to be lined up and set into motion. As the group discusses possibilities for their latest project and how it would be integrated into other projects at the unnamed institution, it becomes clear that their “innovations in citizen life quality enrichment initiatives” will have serious geopolitical consequences, including drought, famine, and subjugation
of the poor. The whole plan is fascism dressed up in the clothes of public
service.

Roberts’ art avoids the standard dark inked lines and goes for color blocks throughout, which gives the comics of Happy Trails a unique dream-like quality. The comics are bright, almost lurid, which emphasizes the plot of the book in an unsettling way. Often flipbooks use dark inked lines to draw the eye, but in this case the movement of forms feels more organic, which I appreciated.

There is a lot going on with this book, and I think it’s safe to say that Happy Trails is the most interesting art comic I’ve read this year. The combination of animation, comics, and the flip book form give Happy Trails a playfulness that is immediately contrasted with the darkness of its story. This is a real zinger, and a comic you should be reading.  Recommended.

Scott Roberts (tumblr: @ubutopia) is a cartoonist and animator, among a lot of other things, based in Chicago, IL. You can find more of Scott’s work at http://ubutopia.com/