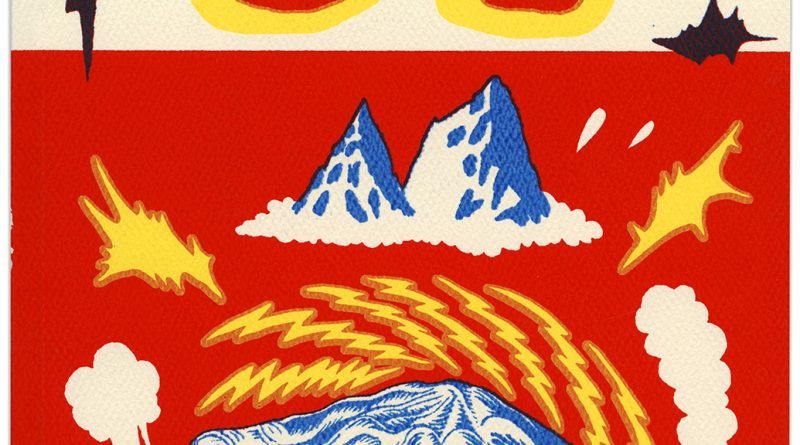 I’m used to reading Lale Westvind’s comics in small doses. Her comic Yazar & Arkadaş, which I reviewed last year, was only 28 pages – but it packed a significant punch. Westvind’s work has an intense physicality and her comics are breathtaking in their scope, power, and drama. Earlier this year, Perfectly Acceptable Press published Grip #1, the first part of a longer planned graphic novel. At 68 pages, this is Westvind’s longest published comic to date. This higher page count gives Westvind a chance to settle into a narrative and explore it more deeply than previous work.

Grip #1 is about a wordless comic about a young woman who gets caught in a swirling cyclone of wind after following it down an alley. This weird phenomenon changes her, making it so that her hands never stop moving. This change dramatically affects her life and leads her on a fantastical journey from job to job, and then finally into a jungle wilderness where she faces a cyclonic being with a power similar to her own.

Part of Grip #1’s appeal is its gorgeous art. While I have consistently praised Westvind’s art in the past, this book feels more intense and more resonant than ever. These drawings wheel and buzz in a way that feels alive; the entire book feels like the air being knocked out of you. Couple Westvind’s excellent linework with a beautiful 3-color risograph printing from Perfectly Acceptable, and you’ve got one of the most beautiful books of the year. A few pages are breathtaking comic art, unparalleled by anything I’ve seen in the last two years. The front cover is just as beautiful, and just as unique; it’s a three color screen print on textured heavy stock paper. The combination of Westvind’s art and the attention to detail placed in the creation of this book make it stand out among the crowd.

The overarching theme of Grip #1 is, without a doubt, the power of the working-class woman. Grip is a celebration of working women, especially women who work in the trades. Westvind’s main character works as a waitress and sorts mail, work that is meaningful and important, but hides in the shadows of our technology-obsessed culture. We even see Westvind’s nod to things like welding, plumbing, and carpentry when another young woman studies while the protagonist watches on. The power of women permeates every structure of the book. Only women in the story add real value to other people’s lives, and only women are confident and capable. The power of these women is evident in Westvind’s drawing, in the thickness of muscle and strength of hands, in their eyes and in their faces. Contrast that strength with the sweaty nervousness of male bosses and managers replacing mail deliverers with drones.That contrast is so well placed that it is nearly palpable.

The more I think about Grip #1 as a work of fiction, the more it seems to me like actual spell craft. The comic is an incantation, its intense images keywords to a greater power locked in the ether. And whether other readers feel the same way is irrelevant – it’s clear to me that Grip #1 casts a spell on its reader, drawing them in until the conclusion. Grip #1 exists in a place where its howling, whistling explosion of an ending feels like a forgone conclusion, a natural assumption, when in reality it is anything but. Grip #1 is without a doubt Lale Westvind’s most stunning work yet. A must-read for any person interested in comic arts, and one of the best comics printed so far in 2018.

One thought on “Review: Grip #1 by Lale Westvind”