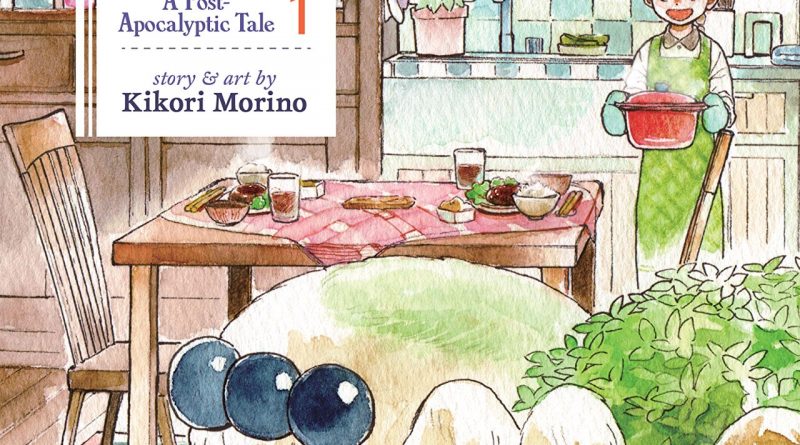 I’m fascinated by Giant Spider & Me, a recent release from Seven Seas. It’s genuinely unfathomable to me how a book like this got greenlit, because it’s about as unfocused a premise as possible. Giant Spider & Me is a grab bag of concepts; it’s a post-apocalypse setting, a slice of life story, a cooking manga, and maybe most important for the publisher, a comic in their monster-girl comic line. In Giant Spider & Me, a young girl named Nagi makes friends with a giant mutant spider with greenery growing on its back. The relationship is buoyed by Nagi’s ability to cook, and the spider’s monstrous appetite. Throughout the first two volumes, Nagi runs into trouble with her giant spider friend, gets attacked by wild dogs (a couple of times, in fact), and meets new people in town who are naturally a little concerned when a 12 year-old who lives in the mountains shows up with a giant spider and expects everyone to treat it the same way they would treat a Labrador.

Cooking manga generally falls into one of two categories, based on the reader’s relationship to the food presented in the book. Either the meals prepared in the comic are so absurd and austentatious that no one is going to make that food, or the food comes from simple recipes that readers can make at home. Giant Spider & Me falls firmly into the latter camp, and because of that, is a much less immersive reading experience than it could be.

There is something appealing about the idea of cooking after the apocalypse; how does food scarcity affect cuisine? Can people who are subsistence farming make tasty food and survive? That’s a story I’d like to read. But that’s not what Giant Spider & Me is about at all. In fact, it’s more like a chef from modern-day Japan was dropped into the future with all the tools and supplies they would need to make modern dishes. If you’re looking for a book that does everything right, Giant Spider & Me fails on this axis almost immediately. The comic ignores its setting in order to show readers how to make tasty food. We know that the people in the book live in a post-apocalypse world, but the characters have easy access to processed foods like mirin and soy sauces, white rice, sugar, not to mention amenities like propane gas. It seems as though guns are considered relatively uncommon or rare, but things like low-gluten flour and freeze-dried tofu are used in recipes throughout the book. The inherent contradictions baked in to the comic are hard to ignore.

Kikori Morino has a beautiful illustrative style, similar to Kaoru Mori or Ryoko Kui. Morino’s pages are lush, full of delicate linework and a surprising amount of hand-drawn hatching and other detail work that is generally managed with screentone in manga. A few scenes, especially when Morino allows the comic to open up, are breathtaking. Morino’s food illustrations are on point and the giant spider, which has a massive mouth and giant teeth, falls mostly on the cute side of cute/creepy.

Morino’s character writing is blandly appealing; like a cup of hot soup, Nagi is unlikely to offend as a level-headed, self-assured heroine. Nagi somehow manages to be more adult that most of the actual adults in the book, and while she tends to get over her head trusting random people and mutant creatures, this trait tends to serve her well rather than cause her any severe problems. A father-daughter pair added in the second volume spices things up a bit. Belle (the daughter of the pair) especially plays foil to Nagi’s calm naivete, but is basically more of the same.

Look, it sounds like I’m giving this book a cold shoulder, but that’s actually not the case. This is a charming series that wears its flaws on its sleeve, and I’m actually quite fond of it. If you’re willing to embrace the fact that the puzzle pieces of this book don’t fit together neatly, it’s a lovingly-drawn comic about making good food and having a big heart. Folks that like dorky big animal antics and durdling scripts will love Giant Spider & Me. But this is a “glass of warm milk” kind of comic; some will find these comics soothing, gentle, and comforting. Others will get a bad case of indigestion.