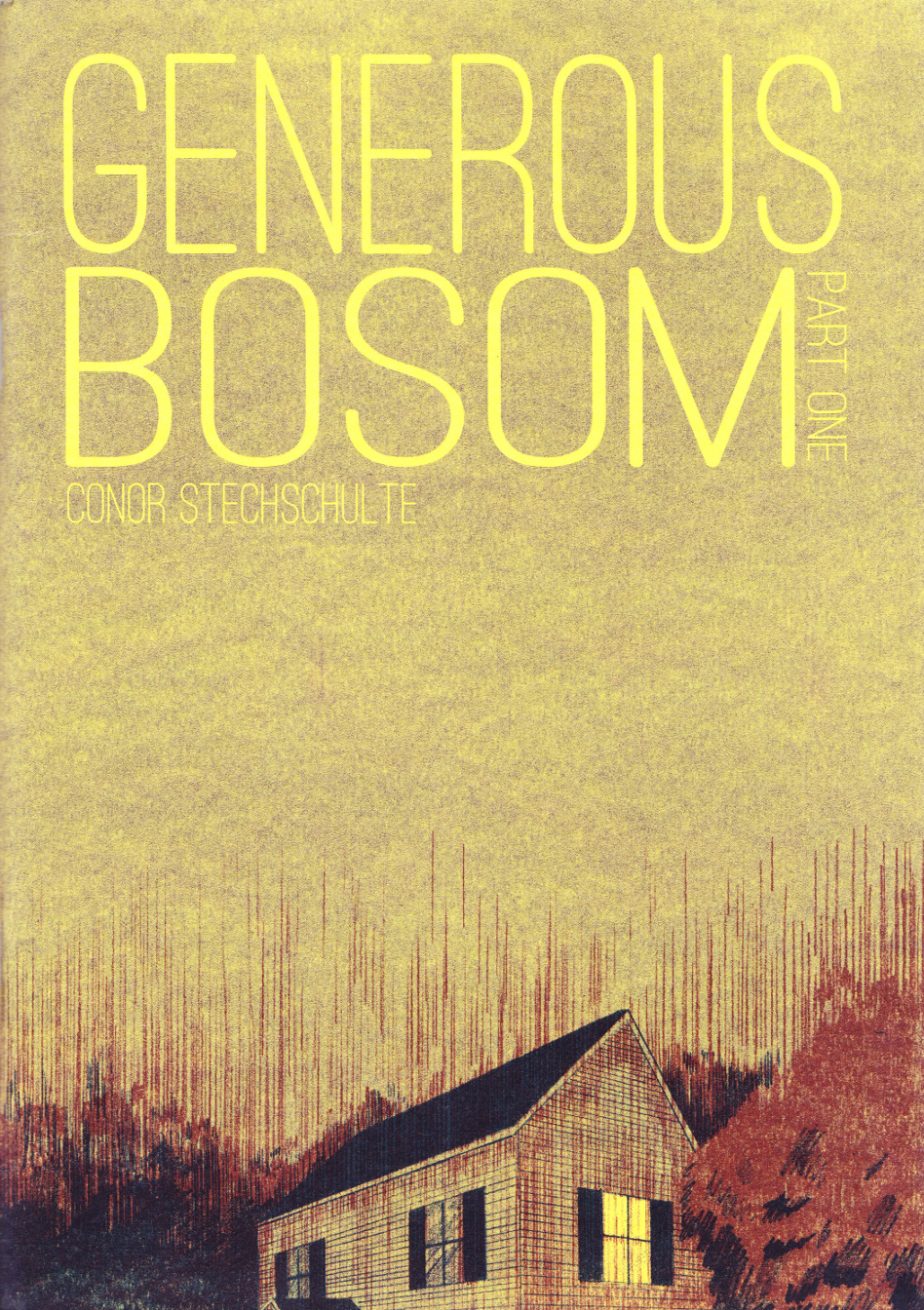 We’re getting towards the end of the year, and I have been thinking about books that I’ve really enjoyed in 2015. One of those was the first issue of Conor Stechschulte’s Generous Bosom, a book that likely made a few 2014 best-of lists. 2014 seemed like a breakout year for Stechschulte with the release of his graphic novel The Amateurs from Fantagraphics as well as this 76 page mostly 2-color risograph comic from Breakdown Press. The first edition of Generous Bosom is saddle stitched, pushing the boundaries of the size that format can achieve; the recent reprint is perfect bound.

Generous Bosom is framed by a conversation between two friends at a bar; Glen meets an unnamed buddy for beers, and discusses a recent strange experience he had after a friend’s wedding. Glen’s car gets a couple of flats on a back road, and he ends up walking to a house in the distance. There, he meets Art and Cyndi, who take him in for the night. The three do a lot of drinking, and eventually Art propositions Glen – please have sex with my wife.

I’m really excited by the way Stechschulte uses color in this comic. The majority of the book is blue ink on white paper. The blue signifies the past, the sexual encounter that Glen has with Cyndi, and is broken up by a burgundy as we see Glen clarify or boast to his friend back at the bar. The pages that really shine are the transitional pages (two of which I’ve tried to capture for you above) where the reality bleeds into the story or vice versa.  There are also a pair of green and purple pages in the middle of the book that appear to be flashbacks from Cyndi’s memory and another girl who otherwise doesn’t appear in the book, Shannon. These pages (in addition to their color separation from the rest of the book) have something of a mirror quality to them. Stechschulte generally uses a four-tier page throughout, but at one point that changes to a five-tier page, increasing a feeling of claustrophobia, tension, and pressure at just the right moment. These smart formal choices emphasize the strangeness of the entire book.

Generous Bosom, it should be said, has a remarkably detailed sexual encounter in the middle of the book. Unlike the rest of the book which has a crisp line, the sex is hazy, almost dreamlike in its consistency. The sex in Generous Bosom isn’t titilating; rather it feels like a reflection on how strange the act of sex can be. There’s also something to be said about how Glen boasts his accomplishments in bed with Cyndi to his buddy, but the memories don’t hold to the story he’s telling. That kind of embellishment and bravado is typical of the way straight men talk about sex to one-another; the truth is too real to actually tell.

Like Stechschulte’s previous work, Generous Bosom has this sense of dread and wrongness that floats over the top of the entire comic. That sense is dramatically amplified with the last page of the book; Stechschulte has constructed one hell of a cliff-hanger, one that solidifies the feeling of wrongness of the previous 70+ pages and turns the narrative on its head. Things that are hinted at in the beginning of the book become solid and tangible. It’s great suspense writing, and I’m excited to see where it leads.  Recommended.

Conor Stechschulte @crepusculararchives is a painter and cartoonist based in Baltimore – you can see his website here. Generous Bosom is published by @breakdownpress, a small press based in the UK. You can buy comics from their website here.

Review: Bloom Into You Volumes 1-2 by Nakatani Nio