If I’ve said it before, I’ll say it again – as far as indie
comics goes, 2015 may very well be remembered as the year of Jillian Tamaki.
With This One Summer receiving the
Caldecott in February, Tamaki has had a great start to the year. And with two books coming out from two very different
publishers this year, Tamaki has a lot going on, and we as readers have a lot
to look forward to. The first of those two books is SexCoven, Tamaki’s entry
into Youth In Decline’s Frontier series, a collection of monographs that has featured work from other rising creators in the indie comics
scene. Subscriber copies are already in the mail, but the book officially debuts
at MoCCA Fest this weekend.

SexCoven is 32
pages with two color interiors, featuring a unique shade of blue (I might say
turquoise, but I have a bit of colorblindness in this range so I can’t say for
certain). The color choice highlights the comic’s murky blacks and fine lines,
and gives the book a sense of melancholy. Tamaki’s remarkable page layouts
again steal the show, although SexCoven
gives Tamaki the chance to experiment a bit compared to the beautiful This One Summer.

SexCoven is a bit
of a mystery in terms of setup, appearing to be equal parts creepypasta (a type
of short horror story made to be shared on the internet), relationship drama,
and documentary. In it, Tamaki describes the mysteries of the audio file
SexCoven, a 6 hour mp3 found randomly on a filesharing website in the late 90’s.
The music has a strange psychosomatic effect on its listener, which culminates
into an online community that later takes on a cult-like setup in the California
desert. Throughout, the mingling of a documentary-like exposition gives way to
the oral history of a former cult member, Raven.

The complexity of this short story is both to be admired and
a little bit daunting. Tamaki hides information about people in graphs and
audio-mixing images, and little pieces of the cultural concerns of the time
seep through the book. SexCoven digs
into the pre-torrent days of internet filesharing, how its secretiveness was
one of its greatest attractors, and the feeling of power you got the first time
you pulled down a file from thin air. SexCoven
also examines the way the online relationships can turn into real life
relationships, and how these things evolve over time. It’s interesting to note that
for most people, the audio file stops having its effect in their late teens – a
symbol perhaps of maturation and the move to adulthood.

In some ways, SexCoven
feels nostalgic for the time before many folks had broadband internet, when
Sony Walkmans still ruled the land, and the way that the internet worked was
vastly different than it is now. Amongst that background noise, Tamaki has
weaved an uneasy tale of sex, relationships, love gained, and lost.
Recommended.

Jillian Tamaki jilliantamaki is an illustrator and cartoonist whose work has been published by First Second, Groundwood Books, and soon, Drawn and Quarterly. The collection of Tamaki’s webcomic SuperMutant Magic Academy debuts at TCAF in May.

Youth in Decline youthindecline is a publisher of comics and chapbooks. Find out more about their publishing slate and buy back-issues of Frontier from their webstore. 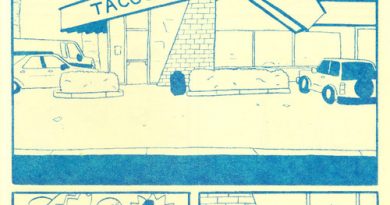