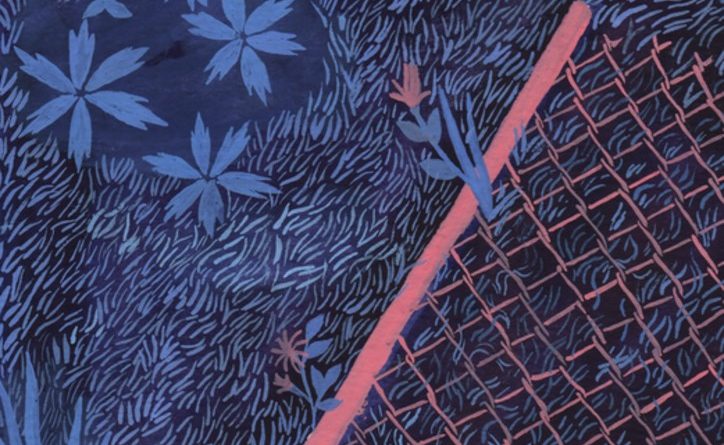 Comics is a medium ripe for the exploration of the intersection between lived experience and mental health conditions. Eli Howey starts down this well-worn path, but quickly steps onto fresh ground with Fluorescent Mud, a recent release from Chicago-based art comics publisher 2dcloud. Fluorescent Mud is 112 pages of watercolor and gouache comics that focuses on the experience of a dissociation disorder and its impact on an unnamed protagonists’ life.

Throughout Fluorescent Mud, the main character experiences what I can only describe as depersonalization; the main character feels disconnected from their physical body and detached from the reality of their surroundings. In the comic, Howey tells two unrelated stories of social events, each with a major dissociation coupled with them. In the first, the protagonist is engaged in a toxic relationship between themself and an insomniac friend/partner who refuses to take their medication. They are drugged by their partner and find out at a later point. In the second story, the protagonist leaves behind their previous living situation and quits their job to visit a friend in another city. After a night of drinking and severe lack of sleep, they have a major dissociation event that leaves them stranded and alone.

As you might expect with a comic about dissociation, there is often a lack of correspondence between what is on the page and what is happening in the real world. Howey’s comics feel like daydreaming at some points, and at others, surreal nightmares. At one point the main character appears to enter some kind of fugue state, wandering across a surreal woodland. We see arms chopped off at the bone, lying limply on tables, the main character represented as a skeleton, their dissociation represented as a ghoul pulling them out of their body. The main character floats between spaces, and the connection between their self and their body waxes and wanes based on their situation; stress, alcohol, drugs, and other substances dramatically affect how based in reality the character is.

Howey’s illustration uses a cool color palette that emphasizes Fluorescent Mud‘s dysphoric mood. There’s a clear disconnectedness between the protagonist’s self and body, and much of the framework of the comic emphasizes that disconnection. Fluorescent Mud is hard to read, because it has an anxiety-inducing quality that is hard to shake off. Throughout Fluorescent Mud, Howey gets at features of severe dissociation, including a sense of helplessness. There’s a symbolism to the work that repeats itself, creating a unique visual language. For example, when Howey’s main character feels helpless, their hands lose their articulation and become shaped like oven mitts. There’s a derealization and a depersonalization that drives a lot of the flow of the comic, and a sense that the things we see on the page are covering up a greater wound.

If anything should be said about Fluorescent Mud, it’s that it’s effective at transmitting to the reader the dense fog of dissociation. At points, I felt that I was the one dissociated. This book draws you into itself, in large part due to Howey’s attractive, immersive illustration. But this feature of the work has its downsides. Fluorescent Mud is hard to stand for any length of time. It’s a complex work, ponderous, but it weighs you down in ways that I wasn’t prepared for.

Fluorescent Mud suffers from a lack of general directionality; the story seems intensely personal, but it’s not very character-driven. It’s hard to follow what is going on, and as a reader its uncertain why you would come along for the ride. There’s a lack of forward momentum to the reading experience, making it easier to put it down and walk away then to continue reading it. At times I felt like I was forcing myself to finish it. In some ways Fluorescent Mud feels half-baked and in others overdone. This is an intentional feature of the work, I think, and is partly why the book works as an examination of dissociative disorders. It’s not great storytelling.

But ultimately, I think Fluorescent Mud isn’t trying to tell a story so much as it is trying to convey a sensation or experience. It’s highly effective at conveying this experience, but the book as a whole makes me wonder if the story elements of the comic are even that necessary. I’m left unsettled by Fluorescent Mud; it’s unlikely I’ll ever return to return to its murky depths.

One thought on “Review: Fluorescent Mud by Eli Howey”