Plenty of folks have spilled ink on Michael DeForge’s latest print comic First Year Healthy. The book defies explanation, which is likely what makes it so fascinating. Its
slight stature and bright imagery makes it seem more like a Little Golden Book
than an alt-comic about mental illness, but here we are.

The most prominent aspect of First Year Healthy (and the one I see the least discussion of) is
the main character’s narrative. Cold, detached, and introspective, the unnamed
main character discusses her release from a hospital after a undisclosed mental health episode and the building of a relationship with a man she calls
The Turk. People start disappearing and the character’s narrative crosses with
that of a stalking, brilliantly colored cat; the main character eventually is
subsumed, wordlessly. “The cat took care of the child while I rested.”  She is never seen on page again.

The narrative is intentionally vague, but there’s also
something to be said about DeForge’s protagonist, whose recounting of facts is “at
best” missing pieces and parts of the full story, and “at worst” is
intentionally misleading. DeForge isn’t writing a straightforward story in First Year Healthy to begin with – using
an unreliable narrator only serves to obfuscate the narrative further. What
small clues are available paint an unsettling picture. Here is a woman whose
own brothers have never introduced her to their wives and children, and only a
close encounter with death seems to cause that fact to register.

The comic also seems to move from more control to less
control; at first she holds down a job at the fish market, which later changes
to another job. She starts a relationship with a man who quickly has to result
to “low level criminal enterprises” to support them. But things seem to turn
after her lover’s ex-wife mysteriously vanishes. Our main character becomes the
proprietor of the woman’s house and distributor of her possessions, betraying
that our protagonist may no longer be employed. The lack of a focus leads to a
spiraling of sorts. Soon other people close to her begin to disappear,
including her lover The Turk. This culminates in the only violence we see on
page, her attack of The Turk’s gangster boss.

There’s also something to be said about the color palette DeForge
uses here – his mix of bright warm reds and oranges seems unsettling beside
earthy greens and browns. The holy cat’s mane is the most vibrant of these, and
seems to represent an extreme in the main character’s condition.

Drawn and Quarterly has done something truly special with First Year Healthy. Textured spot gloss
that makes the books cover raise up to your fingertips, gorgeous end papers,
and nice thick paper, the book itself is a work of art. Of course, this sort of
attention to detail leads to an increase overall in price – 48 pages for $15,
which some readers may find difficult to swallow. First Year Healthy is slight, but the production values on this
book make it one of the prettiest comics I’ve held in quite some time.

DeForge’s story in First
Year Healthy is intriguing, if somewhat hard to parse. I would consider First Year Healthy to be more a special
edition for current fans of his work than the book to introduce new readers to.
Still, this is a fascinating, lovely little book, a real treat for bibliophiles
and Michael DeForge fans, two groups to which I happily am a part. 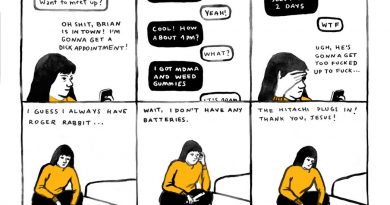