It isn’t often that two of my comics interest seem so perfectly aligned in one project. My interest in manga is what drove me to comics in general, and my experiences at conventions have pushed me towards smaller works and small press. So when a mini from Chromatic Press comes out that has art reminiscent of Natsume Ono, you can bet that you have my interest.

Dinner Ditz is 60 pages black and white comics that takes a lot of its cues from shojo and lighter yaoi manga. Peregrine, who has recently come out and gotten a divorce, wants to connect with his daughter Lottie through cooking, but he’s awful in the kitchen. He enlists the aid of a cooking coach Otho to help him learn to cook better and be less nervous in the kitchen.

Cooke has a good eye for character design. Her male leads are the pensive type with hawkish features and strong jawlines, a similarity to the work of Natsume Ono (the nervous, hawkish guy is the bread and butter of her storytelling). Throughout the mini, the character interactions of Dinner Ditz are the reason it works. The tropes, like the nervous divorcee, are familiar, but the focus is on how two men spend time together, and how a father loves his daughter. Dinner Ditz is at its best when Lottie and Peregrine are on the same page together – there’s a true chemistry in the illustration, and the writing is at its most sincere.

Still, the mini is not without problems. Cooke has a tendency to overuse sound-effect words that explain a face or an action when the meaning could be easily interpreted from her illustration alone. I don’t think I’ve ever seen the words “love nudge” used as a sound effect before. Cooke also over-relies on the profile shot, which makes the comic feel stiff in places. Using a larger variety of character placements, camera angles, and shots would likely improve the flow of the comic and keep the reader’s eye. There were also a few places where the writing felt a bit stilted, especially the opening and closing text.

I think Dinner Ditz is a great start. Cooke’s style is bright and expressive, and Dinner Ditz seems like the beginnings of what will likely be a strong professional career in comics. It’s certainly a cute story. And as Cooke continues to grow as a cartoonist, I’ll be interested to see if she brings us back to the world of Peregrine and Ortho.

Dinner Ditz is written and illustrated by Alexis Cooke (tumblr: anxiousa), and was published by chromaticpress in their sparklermonthly magazine. Sparkler is in the middle of a subscription drive – $5/month gives you access to a lot of comics, prose, and audio material.

A review copy was provided by the publisher for this review. 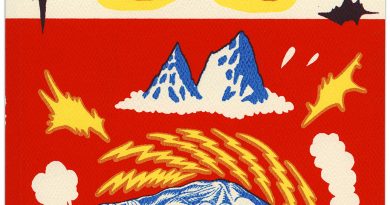