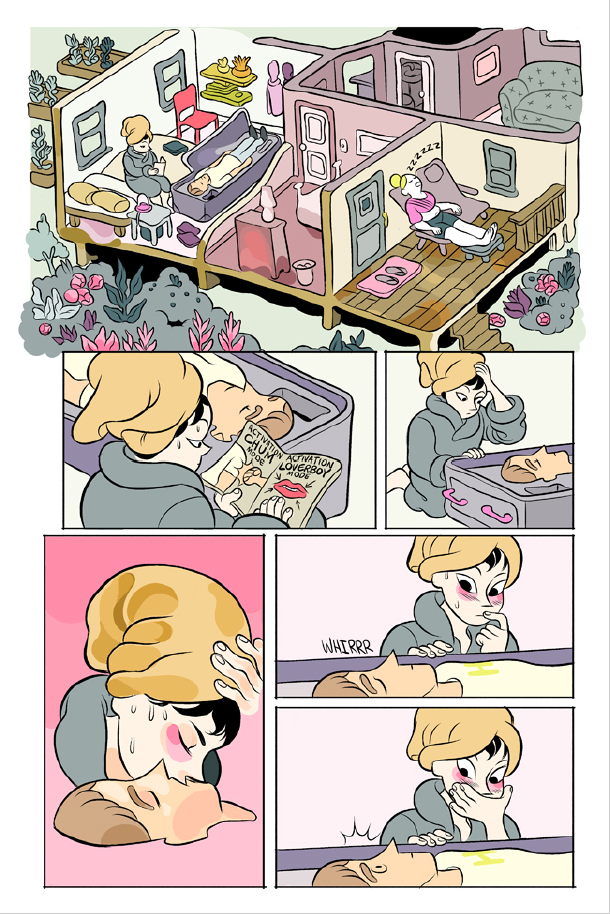 Carolyn Nowak’s comic Radishes won a 2016 Ignatz award and was one of my favorite comics from SPX 2015. Now Nowak is back with a new 70 page full color comic, originally released with a special cover through the international ShortBox comics box program and now out self-published from Nowak herself.

Diana’s Electric Tongue is set in a near future where companion androids are a high-end consumer product for folks looking for friends and/or lovers. Besides those base functions, the androids can be used to share secrets, drive, and do other requested tasks. The main character, Diana, buys a Harbor model android at the beginning of the book as a way to cope with a traumatic accident and a bad breakup.

Diana’s Electric Tongue immediately reminded me of two 2015 comics that I enjoyed, Jeremy Sorese’s Curveball and Kevin Czap’s Futchi Perf. The future constructed in these three comics is flawed, sometimes utopic, sometimes not, but the focus of these comics is to tell an interpersonal story inside of a futuristic framework. Diana, for example, works as a concierge at The Leviathan, a hotel under the ocean, but the story is mostly set in Diana’s boxy shared apartment, which seems rather ordinary. There’s a trend in these science fiction comics that’s compelling. Science fiction often tries to explain itself, to box in every irregularity, to regiment and systematically explain all things that are made, used, or done. This desire to overtell dries out the storytelling. Diana’s Electric  Tongue, along with these two other works, breathe life into the genre by frankly not giving a shit about the genre’s conventions. It’s refreshing.

Nowak’s art is fantastic; there’s a softness to the palette that flares into bright and vibrant shades in the emotionally fraught moments. Similarly the line of the comic is soft, with hard edges smoothed over in every possible place. Colors escape the panels of Diana’s Electric Tongue into the gutters, as though the story contained within them is impossible to contain. I’m also impressed by the pacing of the story; the comic is punctuated, almost separated into chapters by pages with a single centered panel, or a collection of items.

I found the symbolism of Diana’s Electric Tongue compelling as well. The comic is essentially about processing the grief and trauma of the end of relationships, and how we live our lives after those relationships end. Diana’s recent accident, and her reaction to it, is tied together through her electric tongue, and Harbor, her android companion. This symbolism is most clearly observable in the scene where Diana is in bed, Harbor laying beside her in his box; a plug runs into Harbor’s foot and into the case for her tongue. That electronic link, that power line, those blinking lights – all linked through the failed relationship. Both are symbols of the future, and they aren’t comfortable, at least not yet. Diana’s friends are concerned with the safety of androids. Diana’s electric tongue isn’t great at tasting. They aren’t exactly what everyone wants. But still, Diana forges on.

I wouldn’t say that the comic is entirely about relationships – there are undercurrents in Diana’s Electric Tongue about depression, social and relational anxiety, and the dark thoughts we hide from ourselves.

Diana’s Electric Tongue features one of the strongest endings I’ve seen in a graphic novella. The juxtaposition of images from Diana’s motorcycle accident and the poem composed by Harbor is a true gut punch.

The author supplied a digital copy of this work for this review.

Sequential State is on Patreon – if you liked this review, please consider being a monthly patron. The goal is to make Sequential State a better hub for comics criticism, interviews, and more, but I can only do that with your help. Thanks!